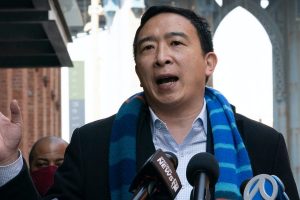 Andrew Yang tweeted in support of Israel amid the country’s latest unrest with Palestinians on Monday, provoking anger from fellow liberals and support from top Republicans.

Yang, who is currently running to be mayor of New York City, tweeted late Monday that he is “standing with the people of Israel who are coming under bombardment attacks” and condemned “Hamas terrorists,” referring to the Palestinian militant group that controls the Gaza Strip.

“The people of NYC will always stand with our brothers and sisters in Israel who face down terrorism and persevere,” Yang tweeted.

Many found Yang’s pro-Israel statement distasteful, including the comedian David Cross who tweeted “nope” in response.

Bishop Talbert Swan, president of the Springfield, Massachusetts chapter of the NAACP, said: “The systemic oppression, institutional discrimination, and violent persecution of Palestinians are crimes against humanity. It is wicked, evil, and inhumane.”

But Yang’s tweet also earned him praise from Republicans, who traditionally support a strong relationship between the US and Israel.

“Bravo to Yang for opposing the rabidly pro-Hamas & anti-Israel attacks from fellow Dems Omar & Tlaib,” Sen. Ted Cruz of Texas tweeted in response to Yang’s tweet, referring to the progressive Reps. Ilhan Omar and Rashia Tlaib, who have both voiced support for Palestinians amid the renewed violence.

Stephen Miller, who worked as a senior advisor to former President Donald Trump, tweeted that Yang is “exactly right,” while Meghan McCain retweeted Yang’s tweet with the hashtag “#YANGGANG.”

The latest clashes between the Israelis and Palestinians date back to the start of Ramadan last month, when Israel moved to block some Palestinian gatherings.

In the ensuing weeks, there have been regular fights between the Israeli police and Palestinian protesters in and around Jerusalem’s Old City. 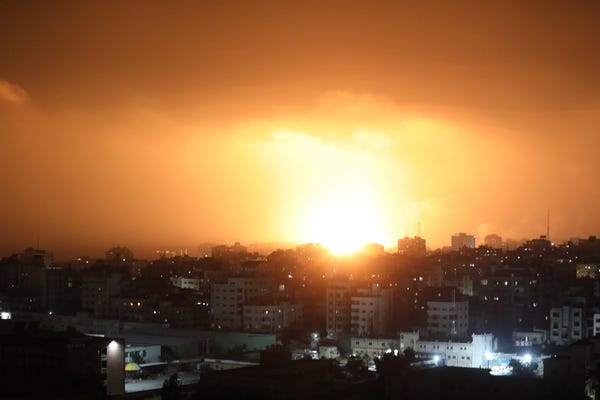 The violence escalated to cross-border fire exchanges on Monday, with Hamas firing more than 200 rockets into Israel, and Israel conducting airstrikes on Gaza in response.

According to the Associated Press, 24 Palestinians — including nine children — have been killed in the Gaza airstrikes since sundown Monday, and six Israeli civilians were injured when one of the Hamas rockets hit an apartment building across the border.