Home » Politics » Republicans Mount an Anti-Trump Revolution in Michigan, But It May Be Too Late

Republicans Mount an Anti-Trump Revolution in Michigan, But It May Be Too Late 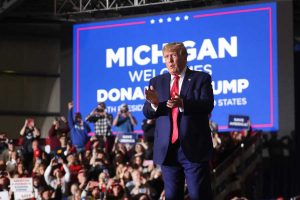 Last Saturday, former president Donald Trump scored a win when the Michigan Republican Party nominated a pair of election deniers he’d endorsed for Secretary of State and Attorney General. The following Tuesday, however, delivered a loss: Michigan state Rep. Matt Maddock (R), a “Big Lie” loyalist vying to become the state house’s next Speaker, had been kicked out of the House Republican caucus amid growing concern over his support of fellow “Stop the Steal”-minded challengers against his incumbent GOP colleagues.

To some Michigan Republicans, his ouster was simply a rebuke of breached courtesy. “A caucus is like a marriage — you don’t cheat on your wife and expect your wife not to be upset,” as one member of the Michigan GOP committee, who would only speak on background, put it. Others viewed it as a rejection of what Maddock’s endorsements were building toward: Trump’s stated desire for “a new legislature” in Michigan — one that would, perhaps, comply with demands to intervene or overturn a future election.

Other dominoes began to fall. Tony Daunt, a longtime Michigan Republican operative, resigned from the GOP state committee on Wednesday with a letter that called Trump a “deranged narcissist” and decried the “feckless, cowardly party ‘leaders’” for backing candidates who amplify his baseless election conspiracies. Michigan’s major GOP benefactors have begun emptying their wallets for incumbents Trump has targeted with primary challengers.

The MAGA faithful remain certain that a “rigged” election explains Trump’s 2020 loss and have launched efforts across battleground states to seize the levers of electoral power. Michigan Republicans’ nomination of two Trump-backed candidates to key statewide election roles — who, in the former president’s words during an April rally, make “sure Michigan is not rigged and stolen again in 2024” — is one front of that battle. Maddock’s removal and the events that followed is another, a sign of an intervention — one led by staunch conservatives, many of whom aided Trump’s presidential ambitions in pursuit of their own political priorities, and now have some regrets.

And yet, there may not be much they can do to stop the Trump train speeding down the tracks. “These people are perfectly positioned to do this if they had done it six years ago,” says Jeff Timmer, a former executive director of the Michigan Republican Party and a vocal Trump critic. “Now, the cancer has metastasized too much.”

Trump has long sought a strong foothold in Michigan, where conspiracies of a stolen election have proliferated among his supporters ever since his 2020 loss. So far, he’s seen success. Meshawn Maddock, Matt’s wife, ascended the co-chair of the Michigan Republican Party in 2021 and has abetted Trump’s unfounded claims of widespread voter fraud and boosted GOP candidates who espouse them. Last fall, the state party quietly replaced Republicans who served on counties’ election certifying boards with newcomers who had sought to undermine the 2020 election results.

At Saturday’s Michigan Republican convention, delegates chose Kristina Karamo and Matt DePerno as their respective nominees for secretary of state and attorney general. Both candidates had earned Trump’s early backing for championing election conspiracies — as well as the support of a majority of Michigan GOP delegates, many of whom are activists and local officials whose political views reflect the party’s base. It was in the wake of that convention outcome that the establishment struck back, though the frustration “has definitely been building for awhile,” says John Truscott, a Michigan-based Republican strategist.

Several of Michigan’s largest GOP donors have instead pooled their money to back incumbents facing Trump-backed challengers, the Detroit News reports. They’re also refusing to give money to the state party: “The typical donors say they’re not going to be part of it,” Truscott adds. The rebellion isn’t being led by the usual cadre of intra-party Trump critics, the sorts who find common ground with the socially liberal New England Republicans or the Lincoln Project. Daunt, for example, is known among Michigan Republicans as a hardline conservative who for years helmed the Michigan Freedom Fund, the political arm of GOP megadonors Dick and Betsy DeVos. (Betsy served as Trump’s secretary of education and resigned in the wake of the January 2021 attack on the U.S. Capitol spurred on by Trump’s election lies.) The dividing line, in other words, isn’t so much about ideology but, rather, democracy.

There may not be much the establishment can do to intervene at this point, however, at least as far as the nominees for Secretary of State and Attorney General are concerned. Michigan Republicans will have another convention in August after the state primaries to confirm its 2022 slate, at which point nominees can be rejected, but only by a supermajority of delegates. A different mass of delegates will attend August’s convention, and they will, perhaps, be less fixed on election conspiracies than the Trump-inclined activists who attended in April. “I don’t know if the new wave of delegates will be enough to make a difference,” Truscott explains. “It would be difficult, but not impossible.”

Even if that revolt did succeed, however, it’s not obvious that it would actually purge the party of the falsehoods those candidates promote. At the state GOP convention in Grand Rapids last weekend, candidates and delegates of all stripes talked to me about “election integrity,” a sort of flimsy term that satisfies the Big Lie base without alienating Republicans who wish the party would drop it, a delegate representing Michigan’s 3rd District observed. ”You kind of have to see who does the tap dance around electoral election integrity — that can be a nod to a stolen election, and I think that’s how many folks hear it,” the delegate, who would only speak on the condition of anonymity, said. “A lot of [candidates] play into that and propagate that, and very few of them believe it themselves.”

Some Michigan Republicans downplay the party’s divisions or the repudiation of the former president. “It’s not so much that they’ve been against who President Trump has endorsed, they’re against people who they think would be bad for Michigan,” says Rocky Raczkowski, the chair of the Oakland County Republicans. “Trump happens to be the common denominator, but it’s not about Trump.” Feelings after a convention will be “raw,” Raczkowski adds, but he suspects the party will come together around its candidates soon.

As the establishment strikes back, so too, do Trump loyalists. A billboard truck was parked outside of the Michigan state capitol building in Lansing on Thursday that depicted the GOP House Speaker as the devil and other GOP lawmakers as cowards. “That was a strategic miscalculation,” Timmer says. “All they’re going to do is make him a bigger martyr.”