Home » Politics » Rooftop Revelations: Mentorship and ownership is the solution to policies from 'liberal white racists' 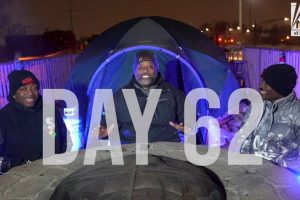 CHICAGO – On the 62nd night of his 100-day rooftop vigil to raise funds for a community center on the South Side of Chicago, Pastor Corey Brooks met for the second time with King Randall and Travis Cochran. Both men do work similar to the pastor but in Albany, Georgia, with their organization, “The ‘X’ for Boys.” They continued their conversation on how policies from “liberal white racists” hurt blacks. This time they focused on two possible solutions: mentorship and ownership.

“I want to talk to you about mentorship and ownership. It’s so important that we get those things going in our community if we’re ever going to revive [our people] and bring them back to life,” the pastor began before turning to Randall. “I wanted you to elaborate more on mentorship. How important is that, especially to young boys that we’re trying to change their lives?”

“Most boys are going to emulate the men that they are around the most,” Randall said. “So they’re around the drug dealers or watching rappers or whoever comes back to the neighborhood the most, that’s who they are going to emulate. A lot of people who make it to be successful … will try and tell boys, ‘Oh, well, you shouldn’t be doing this and you shouldn’t be that,’ versus showing them what they can do.”

Randall also said that mentors have to be in the lives of these children because “consistency is what breeds the best in children … We have to show them that they can have nice cars, they can get a nice wife, they can have good clothes or whatever without selling drugs, without rapping or without being promised sports or something like that. We have to show them many different areas, and the only way that we can do this is through mentorship.”

One of the reasons why the Left has been able to push many bad policies down onto communities like the South Side is because there is very little ownership. People dependent on the government have very little say in what goes on.

Follow along as Fox News checks in Pastor Corey Brooks each day with a new Rooftop Revelation.

Eli Steele is a documentary filmmaker and writer. His latest film is “What Killed Michael Brown?” Twitter: @Hebro_Steele.