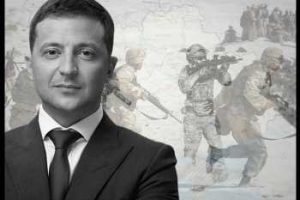 “We have information that Russia is planning a prolonged attack with Shaheds. Its bet may be on exhaustion. On exhaustion of our people, our air defense, our energy sector,” Zelensky said in his national address Monday night.

Speaking from capital Kyiv, the President said, “We must ensure – and we will do everything for this – that this goal of terrorists fails like all the others. Now is the time when everyone involved in the protection of the sky should be especially attentive.”

Zelensky said Ukrainian forces are fighting back by shooting down more than 80 Shahed drones in the first two days of the year.

Russian forces continued attacks across the country in the past three consecutive nights.

Several parts of the country are shivering under intense cold as heating facilities are not working due to lack of power.

Meanwhile, Ukraine’s military chief Gen. Valery Zaluzhny said that about 40 percent of territories that Russia occupied since it invaded the country on February 24, 2022, have been liberated.

“Thanks to international partners it was possible to train more than 20,000 soldiers,” he said, referring to military training that Ukrainian Armed Forces received from 17 European countries.

“In 2022, more than 600,000 people were evacuated from the areas of hostilities and more than 2 million tons of humanitarian goods were brought in,” he wrote in an annual round-up posted on the Telegram app.