Home » Russia's foreign minister said Capitol rioters are being 'persecuted,' setting the stage for a tense summit between Putin and Biden

Russia's foreign minister said Capitol rioters are being 'persecuted,' setting the stage for a tense summit between Putin and Biden 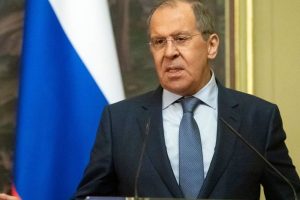 Russia’s Foreign Minister Sergey Lavrov has claimed that rioters who took part in the January 6 attack on the Capitol are being “persecuted” by the US government.

Lavrov made the remarks at a press conference Monday in Moscow, in which he was discussing the planned summit between US President Joe Biden and Russia’s President Vladimir Putin later this month in Geneva.

Ahead of the meeting, Biden has said he will challenge Putin on Russia’s human rights record.

“We are ready to talk, we have no taboo topics. We will discuss whatever we think is necessary. We will be ready to answer the questions that the American side will raise. This also applies to human rights,” said Lavrov.

“For example, we are following with interest the persecution of those persons who are accused of the riots on January 6 this year” in Washington DC.

Lavrov said that in the US “a lot of really interesting things are happening from the point of view of the rights of the opposition and protecting those rights.”

Over the Memorial Day weekend, Biden said he would be confronting Putin over Rusia’s human rights record.

Russian dissident Alexei Navalny has just ended a hunger strike in a penal colony, where he was jailed after returning to Russia following a failed assassination attempt on him. In January, thousands of demonstrators who took the the streets in support of Navalny were arrested.

“I’m meeting with President Putin in a couple weeks in Geneva, making it clear we will not stand by and let him abuse those rights,” Biden said.

Biden’s stance was a contrast with the approach to the Kremlin taken by President Donald Trump, who was largely silent on human rights abuses in Russia.

Diplomats are seeking to ease strained relations between Moscow and Washington DC at the summit. US intelligence agencies believe that Russia is behind a series of cyberattacks on US government computer networks and on US aid agencies. Moscow denies those accusations.

Lavrov’s comments echo some Republican responses to the Capitol riot, with some conservatives having sought to downplay the significance of the riot and portraying the federal investigation into the attack as a bid to persecute ordinary conservatives.

500 people have been charged in the investigation into the riot, for offences including assaulting police officers, firearms offences, violent entry to Congress, and disorderly conduct.