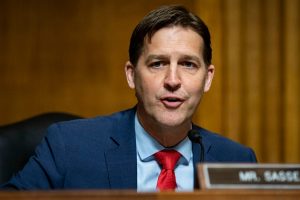 GOP Sen. Ben Sasse of Nebraska on Saturday said he would introduce legislation to grant signing bonuses to new hires, as the latest jobs report on Friday fell far short of expectations.

In an email, Sasse said that the proposed National Signing Bonus Act would redirect expanded unemployment benefits, which have been a lifeline for millions of Americans during the COVID-19 pandemic, into signing bonus payments for new hires.

Under Sasse’s plan, individuals who are hired by July 4 would receive a two-month signing bonus “equal to 101 percent of their current unemployment payment.”

Republicans have long argued for less generous unemployment benefits, saying expanded benefits only serve to disincentivize people from returning to work. They quickly seized on the April jobs report, which showed that US employers added 266,000 jobs for the month, well below the 1 million jobs that many economists were expecting to be added to the US economy.

The April unemployment rate also rose slightly — to 6.1% from 6% — according to the Department of Labor.

“The emergency UI program is now penalizing people for going back to work,” Sasse said in the statement. “Now, as millions of Americans are vaccinated each day, we’ve got crummy job numbers — 7,400,000 jobs are available but fewer than 300,000 people returned to work last month. We’ve got to get America and Americans up and running.”

The US Chamber of Commerce, which last week criticized Biden’s proposed $2 trillion infrastructure bill, called for an end to the $300-a-week federal unemployment benefits after Friday’s report.

“The disappointing jobs report makes it clear that paying people not to work is dampening what should be a stronger jobs market,” the chamber’s chief policy officer, Neal Bradley, said in a statement. “We need a comprehensive approach to dealing with our workforce issues and the very real threat unfilled positions poses to our economic recovery from the pandemic.”

GOP Govs. Greg Gianforte of Montana and Henry McMaster of South Carolina recently announced that their states will opt-out of receiving the expanded federal unemployment benefits at the end of June.

“I hear from too many employers throughout our state who can’t find workers,” Gianforte said last week. “Nearly every sector in our economy faces a labor shortage … We need to incentivize Montanans to reenter the workforce.”

“What was intended to be a short-term financial assistance for the vulnerable and displaced during the height of the pandemic has turned into a dangerous federal entitlement, incentivizing and paying workers to stay at home rather than encouraging them to return to the workplace,” he said.