Home » Schumer disagrees with Tlaib's controversial call to end policing in the US, calls for Dem legislative reforms 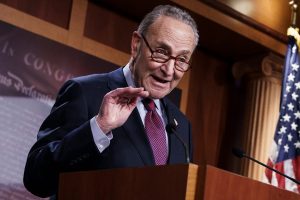 Tlaib’s call to end policing in America is ‘insane’: Attorney

Democrat Rep. Rashida Tlaib says policing is beyond reform after the shooting death of Daunte Wright in Minnesota. Attorney Philip Holloway calls the idea the ‘wrong way’ to address what happened.

Senate Majority Leader Chuck Schumer, D-N.Y., seemed to disagree with Rep. Rashida Tlaib, D-Mich., after the House member said on Twitter that policing in the U.S. “can’t be reformed” and should be eliminated altogether.

Schumer was speaking at a news conference where leaders addressed anti-Asian crimes and discussed proposed legislation targeting violent crimes motivated by a belief that a person’s race is connected with the spread of COVID-19. He was asked how he can push for greater toughness against such offenses while Tlaib calls for ending policing and incarceration.

SQUAD MEMBER CALLS FOR END OF US POLICING, WHICH SHE SAYS IS ‘INTENTIONALLY RACIST’

“Look, we all know we have to root out systemic bias in law enforcement and we feel the best way to do that is the Justice in Policing Act,” Schumer said, referring to the bill inspired by the death of George Floyd.

“I don’t know if it passed the House this year, but it passed it last year, and we are making every effort to move it forward in Senate,” Schumer added, stating that he will put the bill on the Senate floor for a vote.

The George Floyd Justice in Policing Act did pass in the House following a 220-212 vote in March. Unlike Tlaib, the bill calls for police reform instead of abolition, but its support was almost entirely one-sided due to the sweeping changes it proposes.

The sole Republican to vote for it, Rep. Lance Gooden, R-Texas, later claimed it was in error.

“I have arguably the most conservative/America First voting record in Congress! Of course I wouldn’t support the radical left’s, Anti-Police Act,” Gooden tweeted, adding that he requested for the record to be changed.

The bill calls for curbing qualified immunity for police officers, establishing a national task force for law enforcement oversight and a national registry for police misconduct, policies and training to redcude racial bias and profiling, and other measures aimed to increase police accountability.