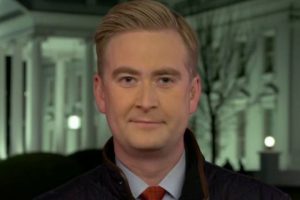 Peter Doocy shares his conversation with the president on ‘Hannity.’

It was his very first day on the job, Inauguration Day, when President Biden laid down the law about treating people nice. He was so serious about it that he threatened to fire the new staffers he was swearing in if they violated the code.

“I am not joking when I say this, if you are ever working with me and I hear you treat another colleague with disrespect, talk down to someone, I promise you I will fire you on the spot,” Biden said. “On the spot. No ifs, ands or buts.”

He had said something similar during the campaign.

But as his polls tank and even liberals question his leadership, Biden is forgetting his own manners. In less than a week, he has attacked three different reporters who posed questions he didn’t like.

It began at his press conference last Wednesday, when Biden returned a question from RealClearNews reporter Philip Wegmann about civility with some incivility.

“You ran on a return to civility,” he was told. And then, Wegmann pointed out, Biden went and characterized those who opposed his voting bills – namely, every Republican in Congress – as being in league with racists like Bull Connor and George Wallace.

“No, I didn’t say that,” Biden snapped. “That is an interesting reading of English. You — I assume you got into journalism because you liked to write.”

President Biden answers questions during a news conference in the East Room of the White House on Jan. 19, 2022, in Washington.
(Chip Somodevilla/Getty Images)

The very next day, Fox News’ Jacqui Heinrich shouted a question to Biden on the Ukraine situation. “Why are you waiting on Putin to make the first move, sir?” was her question.

“What a stupid question,” was his answer.

And then Monday, it was Fox News’ Peter Doocy’s turn. “Do you think inflation will be a political liability ahead of the midterms?” Doocy shouted to the president as the press was being escorted out of an event.

“That’s a great asset, more inflation,” Biden scowled sarcastically. “What a stupid son of a b—-.”

The contrast with what he said almost exactly a year before was striking.

“Everybody … everybody is entitled to be treated with decency and dignity,” Biden had informed his staff. “That’s been missing in a big way the last four years,” he had said of the Trump era. 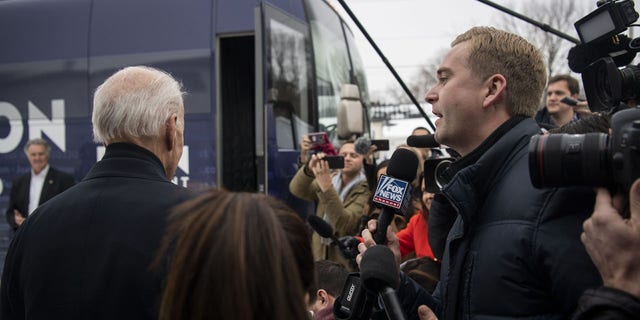 Perhaps that was on his mind when he later called Doocy to try to make things right. But after Fox News’ Sean Hannity asked Doocy if he was given an apology, it became apparent that Biden was not willing to go that far.

“He cleared the air and I appreciate it,” Doocy said politely. “We had a nice call,” Doocy said.

“That’s not an answer,” Hannity chuckled. “That doesn’t sound like an apology.”

“He said, ‘It’s nothing personal, pal.’ And I told him that I appreciate him reaching out,” Doocy replied.

Well, someone was showing decency and dignity.

Fox News’ Joseph A. Wulfsohn contributed to this piece.