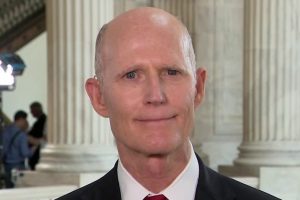 In his campaign for president, Joe Biden made big foreign policy promises to the American people. He promised to “restore dignified leadership at home and respected leadership on the world stage” and “once more place America at the head of the table.”

It was all talk.

Just months into his presidency, Biden’s failed leadership on the world stage has damaged America’s reputation and emboldened our enemies to seize this opportunity of American humiliation and weakness.

We see the latest and most horrifying example of Biden’s weakness in our rapid and chaotic exit from Afghanistan that has left thousands of American citizens – and tens of thousands more Afghans who risked their lives for us for years – at the mercy of the Taliban.

We need a bipartisan and bicameral investigation into how this happened – and I’ve called on Senate Majority Leader Chuck Schumer and House Speaker Nancy Pelosi to immediately launch such an inquiry. This is a job for the United States Congress and we cannot afford to wait to get answers.

Over the past two decades, American and allied forces have driven terrorism in Afghanistan to the brink of extinction. Of course, there was always going to be a time for American forces to leave – but on our terms.

“Forever Wars” and nation building are not good options. We must be singularly focused on protecting American national security and our interests abroad. But the Biden administration’s incompetent and haphazard withdrawal from Afghanistan has been nothing short of a disaster that undermines American national security and our interests abroad. This catastrophe has sent a clear signal to Communist China, the Russians, the Iranian mullahs, the Venezuelan dictatorship, and the illegitimate communist Cuban regime: the United States under President Biden is willing to abandon our people, our allies, and our interests.

In scenes reminiscent of Saigon in 1975, but worse, Americans and our allies around the globe watched in horror as the world’s most powerful nation was simply incompetent and overwhelmed. Having removed our air assets and all our military bases in Afghanistan before we got our people out, the Biden administration left us with no leverage, no power to defend ourselves or deter our enemies.  We did not leave on our own terms. The United States was shamefully driven out of Afghanistan by the Taliban.

A 20-year war that took the lives of more than 2,300 American service members and wounded more than 20,000 others ended with the greatest country in the world running home with our tails between our legs. President Biden allowed the Taliban back into total power in spectacular fashion. Al-Qaeda and other terrorist organizations now know that we have no plan and worse, no will, to resist them. We are even willing to put ourselves in the position of relying on them to safeguard our own citizens trapped in their restored Islamist caliphate.

We needed to end our involvement in Afghanistan but the way Biden chose to do it, his failed withdrawal, leaves the United States reeling from its most stunning, unforced, and humiliating defeat in decades.

Since taking office, Biden has repeatedly given the world’s dictators a free pass while placing the United States in positions of incredible vulnerability. That is why Biden’s Afghanistan meltdown is so dangerous. His abject failure to execute a strategic withdrawal of American forces from Afghanistan has told our enemies that the U.S. under President Biden will not stand up for itself, sending a signal to our allies like Israel, Japan, Taiwan, Australia, and South Korea that we will leave them out to dry.

President Biden’s carelessness has made the world a more dangerous place. His failures have endangered America and our allies. Biden says there was no way to avoid this debacle, and he says the intelligence community agrees with that. We must have a full congressional investigation into this massive failure and why Biden made the decisions he made. This investigation must start right now.

President Biden’s carelessness has made the world a more dangerous place.

Given the events of the last week, I hope our president is ok. I hope he is strong and healthy enough, at this crucial time, for this critical job. His refusal to stand up in front of the press and take questions is deeply troubling. We must discern whether this is incompetence on the part of his administration, or something far more serious.

The American people deserve answers and, frankly, to know whether this president is truly fit to still lead the United States. As I said earlier this week, if he is not, the vice president, and cabinet must consider the 25th Amendment.

I do not say this lightly. The Office of President of the United States is the most powerful in the world and it demands total accountability. If President Biden can no longer competently lead, the president, his cabinet, and the American people know what must be done.