Home » Politics » The Supreme Court has guns, God and abortion on the docket this term: Here's a preview of what to expect

The Supreme Court has guns, God and abortion on the docket this term: Here's a preview of what to expect 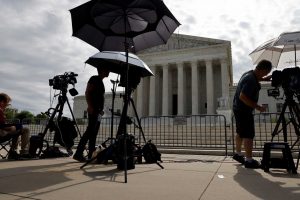 The Supreme Court's new term starts next week, but its critics are already furious.

For the first time in the 19 months of the Covid pandemic, oral arguments will be made in person rather than virtual.

The nine justices will consider pivotal cases that broach some of the most contentious issues in American politics — including religion, guns and abortion — with plenty of space left on the calendar. But courtroom dramas this term may be matched or even eclipsed by several outside pressures facing the institution.

Here are some of the big cases the justices will hear:

The court, stacked 6-3 with justices chosen by Republican presidents, already kicked up a firestorm weeks earlier, when a bare majority of five justices declined to block a strict Texas abortion law from taking effect.

That decision, justified on procedural grounds in a one-paragraph order via the so-called shadow docket, prompted fierce condemnation, including from President Joe Biden, who had already commissioned a group of experts to study possible reforms to the court.

With public support eroding — a Gallup poll conducted just after the Texas ruling showed the court's approval rating sinking to its lowest level ever — some justices in recent weeks have spoken out in their own defense.

The 83-year-old justice, the court's oldest member, has also resisted pressure from the left to step down and allow Biden to appoint a liberal replacement before the 2022 midterms, when Democrats risk losing their slim majority in the Senate.

In a recent speech, conservative Justice Clarence Thomas denounced the media for suggesting that judges "are just always going right to [their] personal preference."

And Justice Amy Coney Barrett, the newest addition to the bench and the third conservative appointee of former President Donald Trump, bluntly declared recently that "this court is not comprised of a bunch of partisan hacks."

Not everyone is convinced.

"I think they're anxious that the cat's out of the bag," said Samuel Moyn, a Yale Law School professor who teaches a class on Supreme Court reform.

"Increasingly it's an open secret that judges are political just like the rest of us, and they're making political choices," Moyn said.

He pointed to Barrett's confirmation as a chief source of fuel propelling the latest push for reforms.

Barrett and Trump's other appointees, Neil Gorsuch and Brett Kavanaugh, sided with the 5-4 majority in declining to block Texas' law banning most abortions after as early as six weeks of gestation, a point when many women have not yet discovered they are pregnant. Chief Justice John Roberts joined the three liberals — Breyer, Sonia Sotomayor and Elena Kagan — in the minority.

That ruling was delivered via the shadow docket, where the court can quickly issue judgments on emergency requests without hearing oral arguments and while providing much less explanation for their reasoning. Experts warn that the court is using this docket more frequently when deciding matters of significance, and that it favored religious groups and the federal government when granting requests in 2020.

Biden's bipartisan commission studying possible changes to the Supreme Court met for the first time in May, and is set to issue a report around November, when oral arguments are in full swing.

Here are some of the biggest cases to watch that are on the calendar for the 2021-22 term, which begins Monday

The case focuses on a 2018 Mississippi law that bans most abortions after 15 weeks of pregnancy. It takes direct aim at Roe v. Wade, which for nearly five decades has been a bulwark against efforts to restrict abortion access.

Mississippi argues that the court should reexamine Roe's prohibition against states banning abortions prior to a fetus becoming viable outside the womb. That line is generally seen as being around 22 weeks of pregnancy, well past the 15-week cutoff that the Mississippi law would impose.

The abortion law was blocked by the 5th U.S. Circuit Court of Appeals, which ruled that it directly contradicts protections against states placing an "undue burden" on abortion access, a precedent established by the 1992 case Planned Parenthood v. Casey.

The Supreme Court will consider whether all rules restricting abortions prior to viability are unconstitutional — a question that threatens the core of Roe.

The court will hear oral arguments Dec. 1 on the Mississippi abortion law.

The Mississippi law differs in substance from the Texas law, which went into effect in September after the high court's move.

In addition to banning most abortions after the sixth week of pregnancy — without making an exception for pregnancies resulting from rape or incest — the Texas law allows anyone to file civil lawsuits against anyone who "aids or abets" in abortion. In a fuming dissent, Sotomayor accused the Lone Star State of effectively deputizing all citizens as "bounty hunters" in order to avoid judicial scrutiny.

The abortion providers and advocates fighting Texas' law filed another request to the court last week, this time making the unusual request for the justices to take up the case before a lower court issued its final ruling.

The case challenging a restrictive New York gun law poses the question of whether the Second Amendment covers the right to carry firearms outside the home.

Lower courts had upheld the law over the objections of the challengers, who include two New York residents whose applications to carry guns publicly were denied.

The most recent major Supreme Court decisions on guns came more than a decade earlier in District of Columbia v. Heller, when the court held that the Second Amendment protects the individual right to carry a gun for self-defense inside the home.

The Supreme Court is set to hear arguments in Bruen on Nov. 3.

The case grapples with Maine's rule barring the use of a student-aid program for schools that teach "sectarian" religious content. The case could shift the line of separation between church and state.

It comes on the heels of the 2020 ruling Espinoza v. Montana Department of Revenue, when the court held 5-4 that a Montana scholarship program that gave funds to religious schools is protected by the Constitution.

If a state decides to offer private education subsidy programs, then "it cannot disqualify some private schools solely because they are religious," Roberts wrote for the majority.

The current case, set for arguments on Dec. 8, asks if the state can bar aid from going toward students attending schools that teach religion in the classroom.

This case raises questions about the extent to which the Rehabilitation Act and the Affordable Care Act protect against disability-based discrimination.

The action was brought by five unidentified HIV-positive people who rely on their employer-sponsored health plans to receive their prescriptions. CVS Caremark, their pharmacy benefits manager, allows enrollees to obtain specialty drugs at "in-network" prices only through a specialty pharmacy, which delivers those drugs only by mail or through pick-up at a CVS pharmacy. Otherwise, the medications end up costing thousands of dollars more per month.

The plaintiffs allege the program causes them harm and prevents them from receiving essential consultation services from specialty pharmacists.

The Supreme Court is asked to consider whether key sections of the Rehabilitation Act and the Affordable Care Act allow for "disparate impact" lawsuits, which deal with claims of effective employment discrimination, on the basis of disability discrimination.

Oral argument is set for Dec. 7.

The court is set to hear arguments in two cases that focus on the government's use of the "state secrets privilege" to force the dismissal of litigation.

One is United States v. Zubaydah, which deals with whether that privilege could be used to quash a Guantanamo Bay detainee's push for evidence about his treatment by the CIA. An appeals court rejected the government's use of the state-secrets privilege on national security grounds. Arguments are set for Oct. 6 on whether that lower court was right to do so.

The other, FBI v. Fazaga, involves claims that the agency had an informant infiltrate a California mosque in the mid-2000s on the basis of their religion. The high court is asked whether a section of Foreign Intelligence Surveillance Act replaces the state-secrets privilege in the case, allowing the challenge of government-surveillance practices to move forward. Oral arguments will take place Nov. 8.

On Thursday, the Supreme Court announced a crop of additional cases it would hear this term, including a campaign-finance case brought by Sen. Ted Cruz, R-Texas, who is challenging a federal law placing a $250,000 cap on the amount a campaign can repay a candidate using post-election donations.

The court also granted a petition challenging Boston over its denial of a conservative group's request to fly a flag bearing a cross outside City Hall.