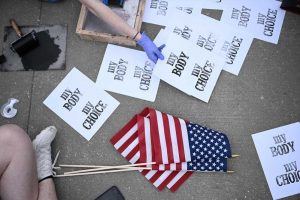 Today, abortion is still legal everywhere in the country. However, it appears that won’t be true for long.

Last night, Politico published an explosive leak of the draft opinion of Dobbs v. Jackson Woman’s Health, the abortion case before the Supreme Court this term. This virtually unprecedented publication of a Supreme Court opinion before final publication indicates that at least five of the court’s conservative justices have voted to overturn Roe v. Wade, the 1973 decision recognizing the right to abortion, and Planned Parenthood v. Casey, the 1992 decision reaffirming the right.

The draft opinion, apparently written by Justice Samuel Alito and presumably agreed to by Justices Clarence Thomas, Neil Gorsuch, Brett Kavanaugh, and Amy Coney Barrett, states in no uncertain terms that “Roe and Casey must be overruled. It is time to heed the Constitution and return the issue of abortion to the people’s elected representatives.”

This bombshell news raises all sorts of important questions, chief among them is whether this draft opinion, indicated to have been written in February, will eventually be the majority opinion of the court. This is a full-throated rejection of Roe, one that is as disruptive to the status quo as possible. It remains to be seen whether, in the justices’ private deliberations, which occur at all stages before publication of the final decision (before voting, during writing, after exchanging drafts, while finalizing), any of the justices have changed their minds or altered their positions. Just last week, The Wall Street Journal indicated there may be some vote changes happening behind closed doors on this case. And there is precedent for dramatic switches in abortion cases — the justices famously switched their votes at the last minute in the Casey case to ultimately save Roe (the full dramatic story of that switch is here and worth reading).

But, if this opinion, or something very close to it, ultimately becomes the court’s decision, what exactly does it mean for this country? The very straightforward answer to this question comes from the draft opinion’s statement that it would “return the issue of abortion to the people’s elected representatives.” Here’s what that will mean.

This opinion is not banning abortion everywhere in the country. In fact, the court itself is not banning abortion anywhere. That being said, by saying that there is no constitutional right to abortion, the court is allowing legislatures to ban abortion. More than half the states in this country have announced their intention to do just that, outlawing almost all abortions or restricting them in ways that will make it virtually impossible to access. These states can move this quickly because many have laws already on the books that will accomplish this goal. Some states have abortion bans from before Roe that they never repealed. Those laws might spring back into effect once Roe is no longer good law. Other states have new restrictions on abortion that have been stopped by courts on the basis of Roe. Yet other states have “trigger laws” saying that abortion in the state will be banned once Roe is overturned. And some states will call emergency legislative sessions to pass new laws banning or restricting abortion. Many of these laws are likely to be challenged in state court, possibly delaying their implementation, but most will take effect in the near future (or sooner).

On the other hand, in the other half of the states, abortion will remain legal. Those will range from states that proactively protect abortion rights, like California, Oregon, and New York, where advocates and politicians have gotten rid of almost all abortion restrictions and have passed affirmative laws to make abortion as accessible as possible, to states like Pennsylvania and Minnesota, where abortion will remain legal but restrictions will remain on the books. Regardless of the specifics, though, in these states, barring a major political change, abortion remains legal, and people in those states will still be able to access abortion.

But if Justice Alito’s opinion becomes the law of the land, state differences in abortion law will create an incredibly complicated patchwork of laws. For that reason, abortion travel is going to skyrocket, flooding the states where abortion remains legal with more patients than they’ve ever seen, delaying abortion care for everyone. We’ve already witnessed this with the aftereffects of SB8 in Texas — the Texas law that effectively banned abortion after six weeks. Patients were forced to travel to states surrounding Texas, pushing providers to the brink of their capacity. As a result, clinics in those states have expanded to meet the demand, but they have also had increased wait times for all patients because of the surge. What we’ve seen as a result of Texas is now going to happen across the country. And the mass migration of patients will have ripple effects for everyone.

There will also be people who cannot travel and will choose to self-manage their abortions by having medication abortion sent to them by mail. Abortion pills are an ever-increasing percentage of abortions in this country, but for the most part those are people obtaining abortion medication through abortion clinics. That is going to change, with pills becoming more and more accessible online. Even people in states where abortion will be banned will have access to pills through various services, though there will be legal risks. Just last month, Lizelle Herrera was arrested for self-managing her abortion in Texas.

But not everyone will be able to gain access to abortion, and there are likely to be large numbers of people each year who carry their pregnancies to term who would otherwise have had an abortion. This comes with devastating effects to their lives.

In the short and long term, the decision will have both predictable and unpredictable effects on our national political landscape. We know that the Republicans in Congress will, once Roe is overturned, push for a national ban on abortion. Right now, with a pro-choice president and the Democrats holding majorities in both the House and the Senate, that isn’t going to be successful. But, if the Democrats lose those chambers in the midterms and then lose the presidency in 2024, a national ban on abortion could have a fighting chance. What we don’t know is whether the court overturning Roe would motivate Democratic voters and even move some otherwise-moderate anti-abortion voters away from the Republican Party. After all, people have long hypothesized that without the promise of overturning Roe, the Republican party would lose voters. But one thing is clear: Returning Roe to the states will inflame rather than answer the country’s abortion debate.

There is much more to unpack about what would happen if this leaked opinion becomes the law of the land. But one certainty is that the court will have bent the moral arc of the universe backward by telling people who are pregnant in this country that they are not equal because government can control what they do with their body.