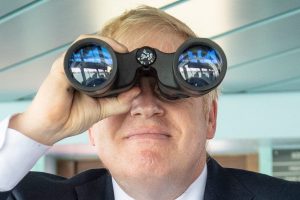 Two British gunboats dispatched by Boris Johnson to Jersey have arrived after around 80 French boats gathered there to demand greater access to the island’s fishing waters.

The development came as France also sent naval patrol boats and threatened to cut power to the island.

Jersey, which is a British crown dependency, sits in the English Channel less than 20 miles off the French coast.

The British naval boats, which are equipped with guns, were sent yesterday after France’s sea minister Annick Girardin threatened to cut off the power to Jersey.

She was angered that Jersey had issued post-Brexit licenses to French fishing boats which imposed restrictive conditions including the amount of time they could spend in Jersey waters, Reuters reported.

“Regarding Jersey, I remind you of the delivery of electricity along underwater cables … Even if it would be regrettable if we had to do it, we’ll do it if we have to,” Girardin told France’s National Assembly on Tuesday, per Reuters.

The Daily Mail reported that Johnson made the decision to deploy the gunboats after intelligence indicated that the flotilla of French boats would try and block all access to Jersey’s Saint Helier port.

A Downing Street spokesman said on Wednesday: “The Prime Minister underlined his unwavering support for Jersey. He said that any blockade would be completely unjustified.

“As a precautionary measure, the UK will be sending two offshore patrol vessels to monitor the situation. They agreed the UK and Jersey governments would continue to work closely on this issue.”

“The British government must now get round the table with French colleagues and authorities in Jersey and sort this issue out.”