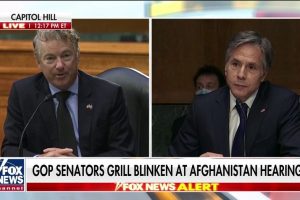 Blinken admits US doesn’t know who was killed in Kabul airstrike, review ongoing

Al Qaeda could rebuild in Afghanistan and again become a threat to the U.S. homeland in one to two years.

“The current assessment probably conservatively is one to two years for al Qaeda to build some capability to at least threaten the homeland,” said Director of the Defense Intelligence Agency Lt. Gen. Scott D. Berrier during Tuesday’s National Security Summit.

Officials say that members of the terrorist group have already started to return to the country amid the Taliban takeover, speeding the timeline for which the group could begin to pose a renewed threat.

While both al Qaeda and ISIS-K have a presence in Afghanistan, only al Qaeda has an established alliance with the Taliban. It is still unclear how much effort the Taliban will put into keeping the terrorist group in check, though they pledged during the peace agreement with the U.S. to not allow the country to become a haven for terrorist groups, a pledge some officials do not trust the Taliban to keep now that U.S. forces have departed Afghanistan.

Deputy director of the CIA David S. Cohen said the agency is watching “some potential movement of al Qaeda to Afghanistan” but noted it is hard for the CIA to assess a timeline for when they or ISIS-K would “have the capability to go to strike the homeland” before the agency could detect the threat.

Without a ground presence in the country, the officials will be looking to develop “over the horizon” methods of collecting intelligence.

“We will also look for ways to work from within the horizon, to the extent that is possible,” Cohen said.

Berrier stressed that any over-the-horizon intelligence ability in Afghanistan will have to be developed alongside a new push to monitor rivals such as Russia and China.

“We’re thinking about ways to gain access back into Afghanistan with all kinds of sources,” Berrier said. “We have to be careful to balance these very scarce resources with this pivot to China, and to Russia.”