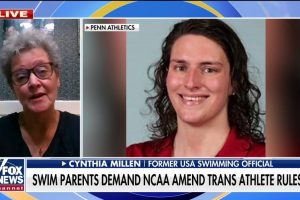 Transgender women athletes who went through a typical male puberty during adolescence still hold a competitive edge over their biologically female competitors, and one year of testosterone suppression therapy as required by the National Collegiate Athletic Association (NCAA) isn’t enough to ensure fairness in women’s sports, some scientists argue.

The scientific community is conflicted over the issue of fairness in women’s sports as trans athletes like University of Pennsylvania swimmer Lia Thomas make headlines for dominating on women’s teams. Women’s sports advocates and parents at Penn have recently spoken out against the NCAA and its rules on transgender student-athlete participation, which require trans women athletes to undergo at least a year of testosterone suppression treatment before competing on a women’s team. 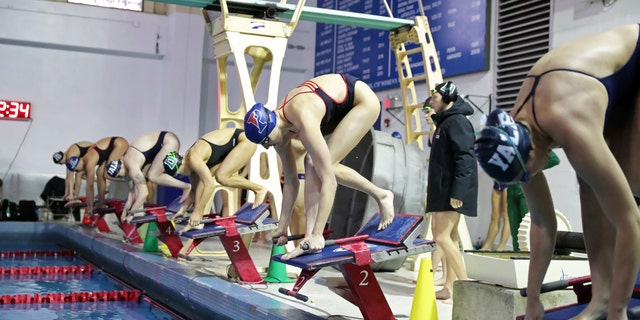 Lia Thomas of the Pennsylvania Quakers gets set to compete in a freestyle event during a tri-meet against the Yale Bulldogs and the Dartmouth Big Green at the University of Pennsylvania on Jan. 8, 2022, in Philadelphia.
(Hunter Martin/Getty Images)

Thomas, who competed on the men’s team for three years before switching to the women’s team in 2020, has been receiving the treatment for nearly three years. She will compete at next month’s Ivy League championships and has already qualified for the NCAA championships in March.

Unlike Penn and the Ivy League, which both issued statements defending Thomas and the NCAA policy in recent weeks, the NCAA itself has yet to weigh in on mounting criticism over its transgender athlete policy.

The NCAA’s board of governors is expected to review the policy during a meeting this week and issue a statement at that time, a spokesperson told Fox News Digital.

Numerous studies in recent years have shown that requiring only one year of testosterone suppression therapy is insufficient in ensuring fairness in women’s sports.

A study released last month by the Macdonald–Laurier Institute, a Canadian think tank, argues that “there is neither a medical intervention nor a clever philosophical argument that can make it fair for trans women to compete in women’s sport,” and it recommends other means of including trans women in competition.

“For trans women who have successfully suppressed testosterone for 12 months, the extent of muscle/strength loss is only an approximately (and modest) -5% after 12 months,” the authors said. “Testosterone suppression does not remove the athletic advantage acquired under high testosterone conditions at puberty, while the male musculoskeletal advantage is retained.”

The study concludes that fairness can be achieved with the “reconceptualization” of the male category as “Open” and the women’s category as “Female,” where female refers to the sex recorded at birth. 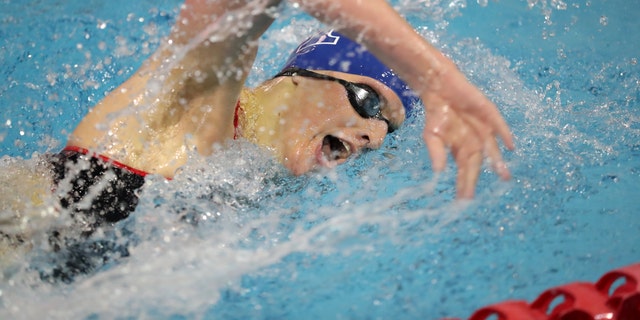 Penn’s Lia Thomas swims in the 500-meter freestyle event against the Yale Bulldogs and the Dartmouth Big Green at the University of Pennsylvania on Jan. 8, 2022, in Philadelphia.
(Hunter Martin/Getty Images)

Joanna Harper, a transgender competitive runner and medical physicist at Britain’s Loughborough University, told WebMD in a July 2021 interview that there’s “absolutely no question” that trans women will maintain strength advantages over cisgender women, or non-transgender women, even after testosterone suppression.

“That’s based on my clinical experience, rather than published data, but I would say there’s zero doubt in my mind,” she said at the time.

Harvard biologist Carole Hooven, author of the book, “T: The Story of Testosterone, the Hormone that Dominates and Divides Us,” told the New York Post in an interview last summer that trans athletes who have undergone typical male puberty retain “much but not all of their athletic advantages” over people born female even after undergoing testosterone suppression.

“Experts and activists debate the question of just how much strength and muscle volume drop after testosterone-suppressing medication,” Hooven said in July. “But evidence shows that male-typical levels of muscle mass and strength are not completely lost. In some trans women, no muscle at all is lost.”

Dr. Timothy Roberts, a pediatrician and the director of the adolescent medicine training program at Children’s Mercy Hospital in Kansas City, Missouri, co-authored a study in August 2020 that looked at U.S. military personnel who transitioned while in service and found that trans women maintained an edge after one year of testosterone suppression therapy, and that trans women still ran 12% faster than cisgender women after more than two years of treatment.

“For the Olympic level, the elite level, I’d say probably two years is more realistic than one year,” Roberts told NBC News in January of last year. “At one year, the trans women on average still have an advantage over the cis women.”

He said that while being in the military is not the same as being an elite athlete, “it’s a comparable situation, where you have someone doing whatever they can to maintain or improve their abilities.”

Tommy Lundberg, a sports scientist at Sweden’s Karolinska Institute, co-authored a study in March 2020 that focused on skeletal muscle strength of trans men and trans women receiving hormone therapy, and determined that a trans woman undergoing testosterone suppression will “still likely” have performance benefits over a cisgender woman after 12 months of treatment.

“The big problem right now is that the [hormone] therapy itself doesn’t really remove the advantage to an extent that you can claim that fairness has been achieved,” Lundberg told German broadcaster Deutsche Welle in a July interview. “And actually, the IOC [International Olympic Committee] states that the overriding objective is, and remains, the guarantee of fair competition. That’s what they say in their guidelines. So that’s the problem right now: They don’t go hand-in-hand.” 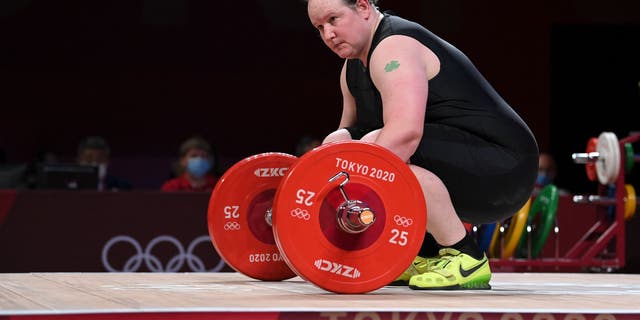 New Zealand’s Laurel Hubbard reacts in the women’s +87kg weightlifting competition during the Tokyo 2020 Olympic Games at the Tokyo International Forum in Tokyo on Aug. 2, 2021.
(Mohd Rasfan/AFP via Getty Images)

Before the Tokyo Olympic Games last year, in which transgender New Zealand athlete Laurel Hubbard competed in women’s weightlifting, IOC’s regulations said trans women could compete if their testosterone levels in serum were at 10 nanomoles per liter for a year for at least 12 months prior to their first competition. Those rules were changed after the games concluded, and the IOC dropped requirements for any procedures or treatment deemed “medically unnecessary.” The guidance now calls for an “evidence-based approach,” in that trans athletes cannot be excluded from any category unless peer-reviewed research consistently demonstrates an unfair advantage.

Scientists like Lundberg say the IOC is sacrificing fairness for inclusivity. Another paper he co-authored in October found that “muscular advantage enjoyed by transgender women is only minimally reduced when testosterone is suppressed.”

“We report that the performance gap between males and females becomes significant at puberty and often amounts to 10-50% depending on sport,” that study said. “The performance gap is more pronounced in sporting activities relying on muscle mass and explosive strength, particularly in the upper body. Longitudinal studies examining the effects of testosterone suppression on muscle mass and strength in transgender women consistently show very modest changes, where the loss of lean body mass, muscle area and strength typically amounts to approximately 5% after 12 months of treatment.”

The most common complaint among scientists and policymakers on the issue remains that there is a lack of research and data on trans women performance in elite sports.

“If you are looking for information on cis gender athletes, you’d never use studies on non-athletic trans people,” Harper told Deutsche Welle in July. “You just wouldn’t do that. It’s just that we don’t have any data on trans athletes. So I think you have to take the results with a certain grain of salt.”

“This is definitely a complex issue,” Durden said at the time. “One reason why it’s so challenging is because the science/medical community really hasn’t reached a consensus on testosterone threshold. We don’t have a definitive answer about that. If there is a threshold, what should that threshold be? So that’s one piece that really makes this problematic when we are trying to develop policy.”

“The lack of research is another issue,” she continued. “And not to say that there’s no research there, but when we are taking a deeper dive and considering what’s important for our population of athletes, we aren’t finding the research that’s specific to collegiate athletes. If you drill down a bit more and talk about sport-specific impact, when you consider strength and power and possible cardiovascular benefits, when you think about a sport and look at a sprinter versus a distance runner, and having some of the specific, definitive research and studies to inform us when we’re trying to determine what’s the best policy for our student-athletes. Those are really significant challenges we’re facing right now.”