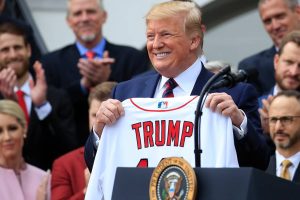 Former President Donald Trump fired a high, hard fastball at Major League Baseball on Friday night, urging fans to boycott the “national pastime” over its decision to pull this year’s All-Star Game from the Atlanta area.

“Baseball is already losing tremendous numbers of fans,” Trump wrote, “and now they leave Atlanta with their All-Star Game because they are afraid of the Radical Left Democrats who do not want voter I.D., which is desperately needed, to have anything to do with our elections. 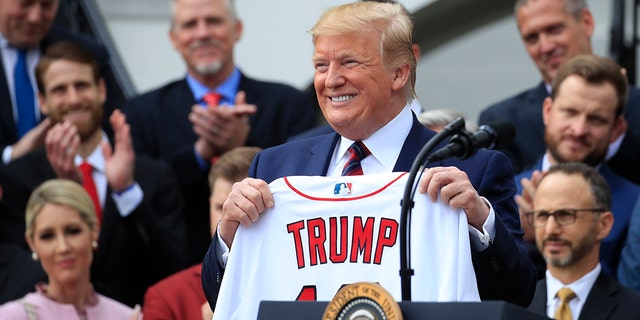 President Donald Trump shows off a Red Sox jersey presented to him during a ceremony welcoming the Boston Red Sox the 2018 World Series baseball champions to the White House, Thursday, May 9, 2019, in Washington. (Associated Press)

“Boycott baseball,” Trump urged, “and all of the woke companies that are interfering with Free and Fair Elections. Are you listening Coke, Delta, and all!”

“Boycott baseball and all of the woke companies that are interfering with Free and Fair Elections. Are you listening Coke, Delta, and all!”

But during an appearance Friday night on Fox News’ “Tucker Carlson Tonight,” Kemp asserted that election laws in New York — home to MLB’s headquarters – remained “stricter” than those in Georgia.

“When you look at New York’s voting laws, you have to have an excuse to vote absentee by-mail in New York. You do not in Georgia,” Kemp told host Tucker Carlson.

Trump has never shied from taking on the major sports leagues, despite their legions of fans.

During his presidency, Trump repeatedly hammered the NFL for allowing national anthem protests along its sidelines prior to games, and last year labeled the NBA a “political organization” after several teams called off playoff games in protest of police brutality.

Trump has also characterized the NBA as being “bought off” by China, claiming the basketball league has favored its own overseas profits over supporting pro-democratic policies.

In a separate statement Friday, Trump directed his ire at the “Fake News Media” over their framing of the 2020 presidential election results.

“Why is it that every time the 2020 ELECTION FRAUD is discussed, the Fake News Media consistently states that such charges are baseless, unfounded, unwarranted, etc?” Trump asked.

“Sadly,” he continued, “there was a massive fraud in the 2020 Presidential Election, and many very angry people understand that. With each passing day, and unfortunately for the Radical Left CRAZIES, more and more facts are coming out.

Trump and many of his supporters have complained about alleged late-night ballot drops in Democrat-controlled districts and allegedly faulty voting machines, but their arguments largely failed to gain traction in the courts.

“Other than that,” Trump concluded, “Happy Easter!”