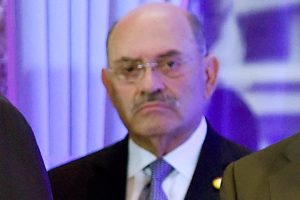 Weisselberg, who has served Trump as loyal executive for decades, is expected to be arraigned in state court later on the criminal case, which NBC News reports is related to fringe benefits awarded by the Trump Organization. The indictment will be unsealed around the same time.

The Trump Organization will be represented by a lawyer at the court proceeding.

Weisselberg's lawyer Mary Mulligan declined to comment after her client walked into the DA's office in lower Manhattan at 6:17 a.m. to be processed on the case.

The indictment was obtained from a grand jury on Wednesday at the behest of the DA's office and New York state Attorney General Letitia James' office.

Although the Trump Organization is being charged in the case as a business, Trump himself is not personally charged. The company faces possible fines and other sanctions in the case if convicted.

A spokesperson for the company said in a statement, "Allen Weisselberg is a loving and devoted husband, father and grandfather who has worked at the Trump Organization for 48 years."

"He is now being used by the Manhattan District Attorney as a pawn in a scorched earth attempt to harm the former President," the spokesperson said.

Vance's office for several years has criminally investigated the Trump Organization in connection with various issues.

Trump, who is a Republican, for years has called Vance's inquiry a politically motivated witch hunt. Both Vance and James are Democrats.

The charges against Weisselberg and the Trump Organization are not expected to end the investigation into the company and the former president.

Both Cohen and Weisselberg's ex-daughter-in-law Jennifer Weisselberg have cooperated with the criminal investigation.