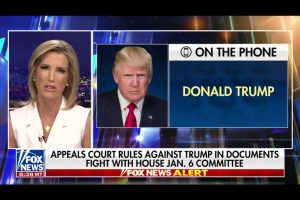 Former President Donald Trump denied riling up the crowd at his Stop the Steal rally that preceded the insurrection at the Capitol on Jan. 6. “I have nothing to hide,” Trump told Fox News host Laura Ingraham on Friday night. “I wasn’t involved in that and if you look at my words and what I said in the speech, they were extremely calming, actually.”

Let’s take a look at some of those “extremely calming” words from the speech he delivered on Jan. 6:

The former president also addressed the ongoing congressional investigation into the events of Jan. 6. Trump has made the claim that executive privilege protects his communications and records from being subpoenaed. And he has bullied his allies into stonewalling the committee with those same executive privilege claims or by invoking their Fifth Amendment right not to self-incriminate.

Trump, who told Ingraham that he had “nothing to hide,” claimed he was just standing up for executive privilege on principle, somehow implying that Biden, too, secretly wants his executive privilege upheld — even though Biden has rejected Trump’s privilege claims on documents subpoenaed by the committee and defended that stance in court. “The biggest loser would be Biden, because if it ever changes, and I think it will, then he won’t be able to use it with respect to Hunter [Biden] and all of the things that are going on that are so terrible. So I would think that he’d want to see this upheld, frankly,” Trump said. But he did not provide details as to what those alleged “terrible” things are.