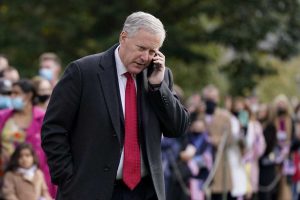 As his presidency was coming to a close, Trump’s chief of staff, Mark Meadows, urged the Justice Department to investigate wild and unfounded conspiracy theories involving the 2020 presidential election, according to newly uncovered emails which were provided to Congress and reviewed by The New York Times.

One of the baseless conspiracies included in the emails was an astonishing claim that people in Italy used military technology and satellites to remotely hack voting machines in the U.S. that flipped votes from Trump to Biden. According to the emails examined by the Times, Rosen did not move on any of Meadows’s suggestions. And Rosen denied a request to set up a meeting with the FBI and a man who had posted videos online promoting the Italy conspiracy theory, known as Italygate.

The emails came to light as part of a Senate Judiciary Committee’s investigation examining whether any Justice Department officials were involved with Trump’s attempts to reverse the legitimate results of the election. Investigations into the matter are also taking place with the House Oversight Committee and DOJ inspector general.

Democratic Sen. Richard Durbin of Illinois, chairman of the Senate Judiciary, released a statement demanding all evidence on the matter be released.

“This new evidence underscores the depths of the White House’s efforts to co-opt the department and influence the electoral vote certification,” Durbin said. “I will demand all evidence of Trump’s efforts to weaponize the Justice Department in his election subversion scheme.”