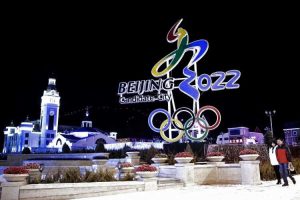 WASHINGTON – The United States and its allies are considering a joint boycott of the 2022 Winter Olympics in Beijing, the State Department said Tuesday.

"It [a joint boycott] is something that we certainly wish to discuss," State spokesman Ned Price told reporters when asked about the Biden administration's plans ahead of the international games.

"A coordinated approach will not only be in our interest but also in the interest of our allies and partners," he added.

Price said that the United States has not yet made a decision but was concerned about China's egregious human rights abuses. The Olympic Games are due to take place between Feb. 4 to Feb. 20.

The potential diplomatic boycott of the games comes as the Biden administration works to rally allies to mount international pushback on China.

Beijing has previously rejected U.S. charges that it has committed genocide against the Uyghurs, a Muslim population indigenous to the Xinjiang Uyghur Autonomous Region in Northwest China. The foreign ministry called such claims "malicious lies" designed to "smear China" and "frustrate China's development."

The sanctions came on the heels of a contentious meeting between Secretary of State Antony Blinken and national security advisor Jake Sullivan and China's top diplomat, Yang Jiechi, and State Councilor Wang Yi in Alaska.

Ahead of the Alaska talks, Blinken slammed China's sweeping use of "coercion and aggression" on the international stage and warned that the U.S. will push back if necessary.

Biden, who spoke to Chinese President Xi Jinping in February, has previously said that his approach to China would be different from his predecessor's in that he would work more closely with allies in order to mount pushback against Beijing.

"We will confront China's economic abuses," Biden said in a speech at the State Department, describing Beijing as America's "most serious competitor."

"But we're also ready to work with Beijing when it's in America's interest to do so. We'll compete from a position of strength by building back better at home and working with our allies and partners."

Tensions between Beijing and Washington soared under the Trump administration, which escalated a trade war and worked to ban Chinese technology companies from doing business in the United States.

Over the past four years, the Trump administration blamed China for a wide range of grievances, including intellectual property theft, unfair trade practices and recently, the coronavirus pandemic.