Home » WATCH: Sen. Ted Cruz tells Democratic Sen. Richard Blumenthal to change his iPhone password after he enters it in on live TV

WATCH: Sen. Ted Cruz tells Democratic Sen. Richard Blumenthal to change his iPhone password after he enters it in on live TV 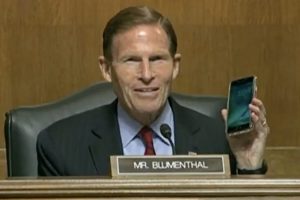 Sen. Ted Cruz of Texas advised Sen. Richard Blumenthal of Connecticut on Tuesday that he should change his iPhone password after Blumenthal held his phone up to the camera and entered his password in on live television.

The interaction came during a hearing before the the Senate Judiciary Subcommittee on the Constitution. Blumenthal is the chairman of the panel and Cruz is the ranking member.

The purpose of the hearing was to address gun violence in the US and how safe gun storage practices could help mitigate the problem. When it was his turn to speak, Blumenthal noted that “far fewer than 90 seconds would be required to use the kind of safe storage that is available now.”

He then held up his phone to face the camera and added: “On May 25, 2021, we have technology, and it’s on all of our cell phones that enable us to press in less than a second, or if we don’t like that, in again, less than a second, to access our phones —”

While speaking and as his phone was still facing toward the camera, Blumenthal went on to enter in the password.

Cruz then interjected: “Senator Blumenthal, I would note that you put out on C-SPAN the code on your iPhone, so you might want to change that now.”

Blumenthal laughed and replied, “My life is an open book, but I recognize that it’s happened before.”

Watch the interaction below: