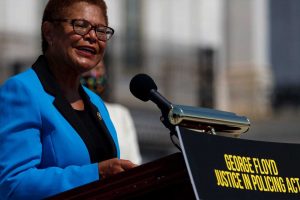 WASHINGTON – The U.S. House of Representatives passed the George Floyd Justice in Policing Act on Wednesday night in a  220-212 vote, ushering in a series of police reform measures in the wake of national uprising against racial injustice and police brutality.

The policing reform bill aims to bolster police accountability and prevent problem officers from moving from one department to another by creating a national registry to track those with checkered records. It also would end certain police practices that have been under scrutiny after the deaths of Black Americans in the last year.

California Rep. Karen Bass, a Democrat and former chairwoman of the Congressional Black Caucus who reintroduced the bill with House Judiciary Chair Jerrold Nadler, D-N.Y., said Wednesday morning during a press call that 30 years after Rodney King was beaten by police in Los Angeles, “we are still trying to transform policing in the United States. And since George Floyd was murdered a year ago, there have been over 100 officer-involved shootings, there have been numerous examples of officers not being charged.

“At some point, we have to ask ourselves, ‘How many more people have to die? How many more people have to be brutalized on videotape like the three girls – 6, 8, and 11 years old – in Colorado that were taken out of their car, made to lie on their ground?’ We must act now to transform policing in the United States to hold police accountable but also to give them the support they need to have accreditation and raise the standard of policing in the United States.”

Floyd died May 25, 2020, after a Minneapolis police officer, Derek Chauvin, knelt on his neck for nearly nine minutes as Floyd cried out that he could not breathe. His death sparked nationwide protests against police brutality and systemic racism.

What’s in the George Floyd Justice in Policing Act

The reintroduced bill would: prohibit profiling based on race and religion and mandate training on profiling; ban chokeholds, carotid holds and no-knock warrants; require the use of federal funds to ensure use of body cameras; establish a National Police Misconduct Registry; amend the prosecution standard for police from “willfulness” to “recklessness” and reform qualified immunity; and require stronger data reporting on police use of force.

‘Righting wrongs’: Congress is taking another look at reparations for slavery

The legislation was first introduced last year amid nationwide protests over racial inequality following the death of George Floyd and passed in the last Congress with a bipartisan vote of 236-181.