Home » Why do Trump's foreign golf resorts lose millions of dollars every year? Experts say it could be incompetence, vanity, or something more sinister

Why do Trump's foreign golf resorts lose millions of dollars every year? Experts say it could be incompetence, vanity, or something more sinister 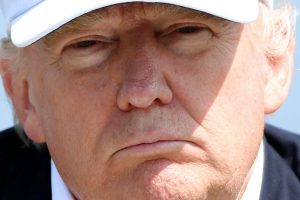 Donald Trump’s golf resorts lose a lot of money. According to one bombshell New York Times report published last year, the 15 courses he owns around the world have lost over $315 million dollars over the last 20 years. The interesting question is why does Trump continue to hang on to so many loss-making enterprises?

Much about Trump’s financial arrangements remain a mystery, partly because privately listed companies in the US can largely avoid public scrutiny — although ongoing criminal investigations into possible banking and tax fraud may soon change that.

But because the United Kingdom has a registry of companies that requires them to publicly file accounts every year, we can look in granular detail at how much his two courses in Scotland lose every year, and how much debt they’ve racked up (Hint: It’s a lot.)

So why does Trump and his sons, who ran his businesses while he was president, continue to run courses that lose so much money?

We spoke to leading experts, examined the financial data, and looked back at the president’s own words on the matter to try to find out why.

Insider contacted the Trump Organisation for comment but did not receive a reply at the time of publication. 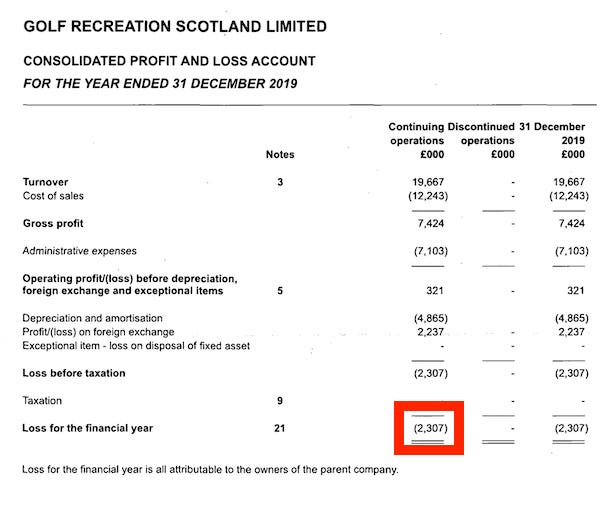 First, let’s look at the figures. Trump has two golf resorts in Scotland. He opened his first, Trump International Golf Links, in Aberdeenshire in 2012 on a piece of land he had purchased six years before. The course has made a loss every year since.

Company accounts for 2019 — which covered the period before COVID-19 wreaked havoc on many businesses — show that Trump International Golf Club Scotland Limited, which owns the course, posted annual losses of $1.5 million. The total debt on the resort is more than $16 million, the balance sheet shows.

The second course is Turnberry, the jewel in the crown of his global golf empire. He paid $60 million for the storied resort in 2014, where Tom Watson famously scraped a win over Jack Nicklaus at the 1977 Open Championship.

Trump then claimed to have spent a further $150 million on its lavish refurbishment. Turnberry’s parent company, Golf Recreation Scotland, posted a $3.25 million loss on revenue of $26 million in 2019 and owes nearly $160 million to its creditors, the balance sheet shows.

Such losses are not unprecedented in the industry. Running a golf resort profitably is a hard thing to do, said Larry Hirsh, president of Golf Property Analysts, which values and markets golf properties.

“Over the last 10 to 20 years, golf courses have had their challenges,” Hirsh told Insider.

“It costs a lot to go play, and Trump has never been shy about pricing his properties. Certainly, golf has experienced over the last 15 or 20 years a decline in participation,” he said.

However, he added that “it’s certainly not the idea” for major golf courses to lose money, Hirsh said. “I don’t think it’s normal.”

Donald Trump said in a 2016 interview with Reuters that people looking at the massive losses at his golf resorts were missing the point.

In fact, he said, his resorts were “not really golf investments” but real estate “development deals.”

“It’s pretty simple,” he said. “My golf holdings are really investments in thousands, many thousands of housing units and hotels. At some point, the company will do them. Hopefully, I won’t because I will be president, but we’re in no rush to do them.” 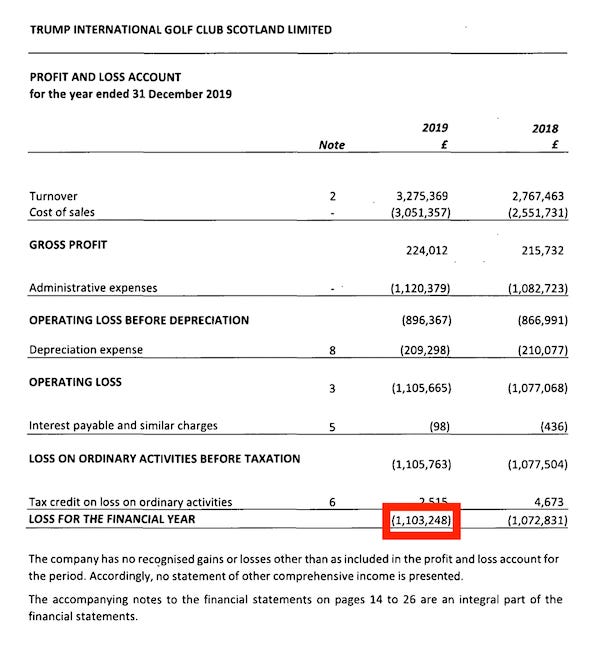 There is just one problem with those claims: Trump hasn’t built a single residential property on any golf resort he owns in the last decade, in Europe or the United States, Reuters reported.

At his Aberdeenshire resort, he secured provisional permission in 2008 to build around 1,500 luxury homes on farmland surrounding the estate, on the condition he built a hotel and what the Trump Organisation billed as the “world’s greatest golf course.” The economic gains would outweigh the significant environmental impact of the building work, the council said. But neither the houses nor the hotel materialized.

In 2019, he secured approval for a reworked plan to build 500 homes, but construction is yet to start.

At Turnberry, Trump tried and failed to secure permission to develop hundreds of houses on land adjoining the estate. He had boasted to Reuters that he “would have the right to build at least a thousand houses on Turnberry if I wanted to.” But Scottish planners had different ideas: Plans for an 87-house development on farmland adjoining Turnberry were rejected by the local authority in 2019, the Scotsman reported.

The ruling specifically stated that the development had been rejected because it could “negatively affect” the status of Turnberry as an iconic resort — which suggests that Trump’s plan to build houses on his golf resorts may be very unsound from a business perspective.

That brings us to the second theory: Incompetence.

Is it simple incompetence? 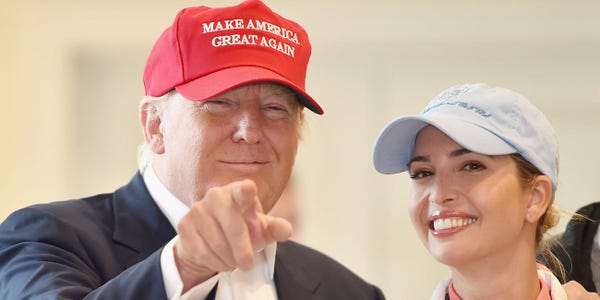 Trump’s patchy business record is well-documented. He demonstrated a genius for self-marketing that saw him license out his to resorts and luxury developments all over the world, and ultimately propelled him to the White House. But his businesses have also filed for corporate bankruptcy six times and he counts dozens of hugely expensive failures among his successful business ventures.

Over the decades there were his Atlantic City casinos, which folded after racking up billions of dollars in debt, there was Trump University, which paid out a $25 million settlement to former students in 2017 after New York’s attorney general called it “fraudulent,” and there was a short-lived airline called Trump Shuttle.

The accounts for Turnberry and Trump Links suggest that they may too be two further examples of poorly run businesses. A detailed analysis of Trump’s two courses by Behind the Balance Sheet, a financial research consultancy, illustrated that profits have been consistently lower than at other established rivals in Scotland, including Loch Lomond Golf Club and Gleneagles, the world-famous golf resort. Additionally, capital expenditure has consistently outstripped revenue growth at both resorts. All in all, it’s difficult to see how either business will ever generate a positive return on Trump’s huge initial investment.

Are they being kept for ‘fishy’ tax purposes? 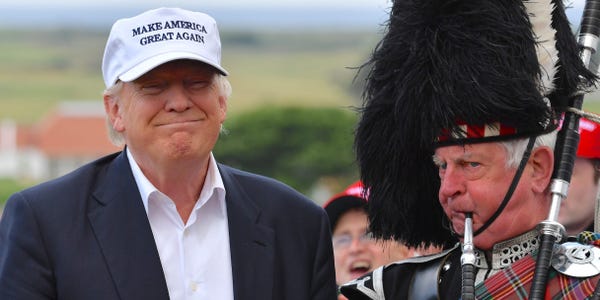 Their loans are unusual, however, because they are interest-free, which is an unusual arrangement because it negates any potential tax benefit of loaning money between companies owned by Trump, Mother Jones reported.

“Under US tax law, you can’t really have an interest-free loan between related parties,” he said.

“There would be a tendency to impute the market interest rate, or else they say it’s really equity.

“So when separate tax entities are engaged in transactions, the idea is that it’s got to be arms-length, it’s got to reflect reality.”

That said, Shaviro said it wasn’t obvious that there was any benefit to the way Trump had set up the loans.

“I don’t see the obvious tax benefits here,” he said. “Whether it’s money-laundering or playing games with lenders, there is a pretty good guess something is going on, but I’m not sure exactly what it would be.”

That brings us to the last unanswered theory. 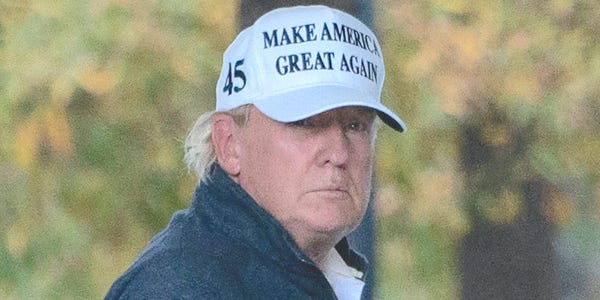 Harvie, a member of Scottish parliament, told the house in February: “The purchases in Scotland were part of a very long spending spree, with his spokespeople claiming that he had vast sums of money sitting around and available for investment even though, at the same time, he was apparently being turned down for credit.”

The details are striking: Trump, who used to style himself the “king of debt,” had spent his career building businesses on other people’s borrowed money, even bragging about it on the campaign trail in 2016.

In 2006, he suddenly went on a spending spree, and would spend the next decade buying up more than $400 million worth of properties in cash, the Washington Post reported. The first purchase was his Balmedie estate in 2006; the most expensive of them all was his purchase of Turnberry in 2014, despite the fact it was loss-making then, too. He purchased a course in Doonbeg, Ireland, in the same year, also using cash. So where did it come from?

Harvie alluded to testimony to the US Congress given at a closed-door meeting in 2017 by Glenn Simpson, the head of FusionGPS, the political research agency which produced the controversial Steele dossier on alleged links between Trump and Russia — one part of which was called “misleading” by a UK judge.

Simpson told lawmakers that the firm’s investigations had identified in the Trump Organisation “patterns of buying and selling” real estate that was “suggestive of money laundering.”

Later in his testimony, he said: “Because the Irish and the Scottish courses are under the UK … we were able to get the financial statements.

“And they don’t, on their faces show Russian involvement, but what they do show is enormous amounts of capital flowing into these projects from unknown sources and — or at least on paper it says it’s from the Trump Organisation, but it’s hundreds of millions of dollars. And these golf courses are just, you know, they’re sinks. They don’t actually make any money.”

Trump’s son Eric said Harvie’s claims had “no basis in fact” and called them “disgusting.”

Scotland’s government ultimately rejected these calls for an unexplained wealth order on the grounds that it was for the country’s law officers, not politicians, to instigate such investigations. Nonetheless, these questions about how Trump paid for his golf resorts and why they persist to lose quite so much money will only grow.