William H. Regnery II, a racist, reclusive multimillionaire who used his inherited fortune to finance vile white supremacist groups in the hopes of one day forming an American whites-only ethnostate, died earlier this month, his family and associates confirmed. He was 80 years old.

Regnery, whose family amassed riches from its right-wing publishing empire, died on July 2 in Florida after a “long battle with cancer,” his cousin Alfred, the former head of Regnery Publishing, confirmed to HuffPost.

Asked if he’d like to comment on his cousin’s life and legacy, Alfred Regnery replied: “No, it’s all been said before.”

In the final two decades of his life, William Regnery funneled hundreds of thousands of dollars — and likely much more — to extremist groups. He is often credited with being one of the main funders of the so-called alt-right, the resurgent fascist movement that gained momentum during the rise of former President Donald Trump.

“His patronage of white nationalists over more than two decades helped popularize a genocidal vision for a white ethnostate on North American soil and sinking fear of racial replacement in the hearts of a growing portion of the white American population,” Ramos added. “This vision will not prevail, but it won’t either be easily extinguished.”

HuffPost first learned of Regnery’s death on Twitter, where some of the many avowed white nationalists permitted on that platform mourned their benefactor’s passing.

“Bill Regnery was a good man, who cared about the future, and, as they say, ‘did something’ about it,” tweeted Richard Spencer, the racist who led the National Policy Institute, a white nationalist organization Regnery founded.

Kevin MacDonald — perhaps America’s foremost anti-Semite, who authored a series of books claiming that Jews are genetically hard-wired to destroy Western civilization — also tweeted that he hoped Regnery would “rest in peace.”

MacDonald and Spencer are both members of the Charles Martel Society, a secretive organization of prominent American fascists founded and funded with nearly $90,000 donated from family charities and other tax exempt organizations affiliated with Regnery. (Nonprofits are not legally required to identify individual donors, so it’s possible Regnery personally donated much more.) The society publishes The Occidental Quarterly, a journal for which MacDonald serves as editor.

Other white nationalists who weren’t direct beneficiaries of Regnery’s largesse also expressed sadness at his passing.

“My friend and a true hero,” wrote James Edwards, host of the white nationalist radio show “The Political Cesspool.” “He set a sterling example for the rest of us to follow and upon his shoulders we stand.” 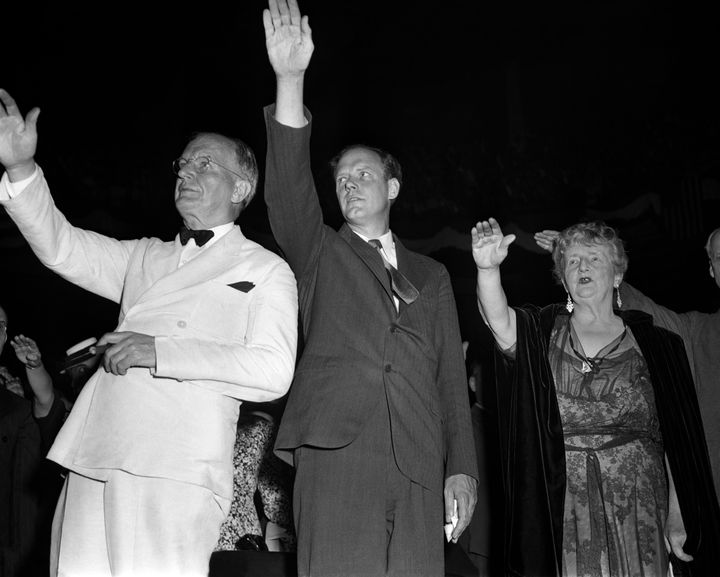 His grandfather and namesake, textile magnate William H. Regnery I, was a founding member of the infamous America First Committee. The organization, led by anti-Semitic aviator Charles Lindbergh, opposed America’s intervention in World War II and counted many Nazi sympathizers among its ranks.

In 1947, Bill Regnery’s uncle, Henry, founded Regnery Publishing, which would grow into one of  the most influential right-wing media dynasties in America. In its early years, the company published prominent conservative thinkers, including William F. Buckley, a racist and segregationist, and Robert Welch, founder of the John Birch Society, the anti-communist conspiracist group.

More recently it has published anti-Muslim bigots Robert Spencer and David Horowitz, and anti-immigrant crusaders Ann Coulter and Michelle Malkin, as well as books from Republican senators and other politicians ― including Donald Trump’s 2015 “Time to Get Tough.”

When Henry Regnery died in 1996, The New York Times eulogized him as “the godfather of modern conservatism.”

The Regnery family’s influence extended beyond the publishing world. Bill Regnery’s cousin Alfred Regnery was an official at the Department of Justice under President Ronald Reagan before eventually taking over the family publishing company.

Bill Regnery started showing an interest in politics while a student in the early 1960s at the University of Pennsylvania, where he launched a conservative student magazine. He never graduated from Penn, however, telling BuzzFeed News in an extensive 2017 interview that he was “still a couple credits short of a degree.”

He said he left to work for the 1964 presidential campaign of Republican Barry Goldwater, the far-right senator from Arizona. As BuzzFeed News described, Regnery claimed to have hatched a bizarre scheme to suppress Democratic votes on Election Day that year:

His most memorable effort, he claimed, was a convoluted scheme called Operation Dewdrop, intended to suppress Democratic voters in Philadelphia. At the time, he explained, the theory was that Democrats voted less in the rain. So on election day, he said, he tried to seed rain clouds by using dry ice and a twin-engine airplane. It didn’t rain, he recalled, but he burned his fingers from the dry ice canisters, a detail that helps add a ring of authenticity. Goldwater lost to Lyndon Johnson in a landslide.

Such bizarre failures and embarrassments seem to have marked Regnery’s life. According to Alfred and another cousin, Frederick Meyers, he nearly ruined the family’s textile business, and the family forced him to resign as president in 1981, court records show.

In the early 1990s, Regnery became disillusioned with mainstream American conservatism, seeing it as insufficiently concerned about race, according to a memoir he published in 2015, “Left Behind,” a copy of which Mother Jones reviewed. It horrified him that whites might one day be a minority in America.

In December 1999, Regnery convened a conference for prominent white nationalists at a hotel in Florida, where he declared his belief in breaking up the United States into a series of enclaves based on race and religion, a plan that would undoubtedly involve the violent ethnic cleansing of nonwhites.

“In closing, I charge the participants of this conference with the sacred task of beginning to secure for our children’s children a proper home,” Regnery said at the conference.

Two years later, in 2001, he founded the Charles Martel Society, named for the 8th century Frankish ruler the modern far-right often glorifies for defending Gaul, in modern-day France, from an invading Arab army. Regnery staffed the organization with a who’s who of infamous white supremacists, including Sam Francis, who once suggested “imposing adequate fertility controls on nonwhites.”

In 2004, Regnery tried to launch a whites-only dating website, an effort he hoped would increase the number of white families, “since the survival of our race depends upon our people marrying, reproducing and parenting.”

And in 2005, he founded the innocuous-sounding National Policy Institute (NPI), a white nationalist think tank on a mission “to elevate the consciousness of whites” by studying “the consequences of the ongoing influx that non-Western populations pose to our national identity.”

This paranoia over immigration from nonwhite countries into America and Europe — often called the “great replacement” theory — has animated multiple white supremacist massacres in recent years, including those in Pittsburgh, El Paso and Charleston, South Carolina.

According to a BuzzFeed News tally, nonprofits and other tax-exempt organizations affiliated with Regnery poured nearly half a million dollars into NPI’s coffers from 2005 to 2015. (Though William Regnery himself could have personally donated more.)

Regnery seemed content to be the moneyman behind NPI and the Charles Martel Society, working quietly behind the scenes.

“Where his relatives have headed corporations, held public office, and run high-profile civic groups, the younger William works hard to keep his activities out of the public eye,” the Southern Poverty Law Center once wrote of Regnery, adding that while his family members “worked to cultivate an air of mainstream respectability, William ran headlong into the fever swamps of white nationalism, where his familial and financial clout allowed him to set himself up as a major force shaping the entire movement.” 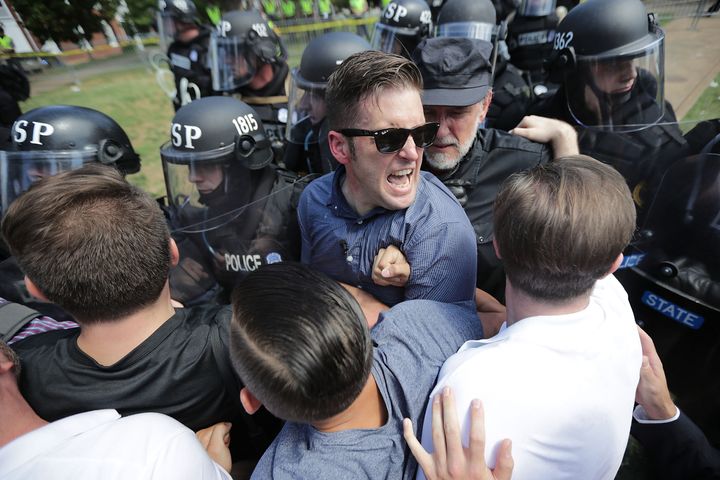 Regnery tapped Richard Spencer to lead NPI in 2011. In Spencer, Regnery found someone who relished the limelight. Also from a wealthy conservative family, Spencer had pursued a doctorate at Duke University while making inroads among right-wing extremists, writing for numerous publications, including The American Conservative.

Spencer launched two websites, AlternativeRight.com and RadixJournal.com, which eventually became important propaganda outlets for the so-called alt-right, a term Spencer claims to have coined himself to describe a growing online coalition of racists, including trolls and shitposters, neo-Nazis and Klansmen, Holocaust deniers and suit-and-tie fascists.

When Trump launched his presidential campaign in 2015, he often mimicked “alt-right” talking points, such as calling Mexican immigrants rapists and proposing a ban on Muslims entering the United States. The chief executive of Trump’s campaign, Steve Bannon, had previously run Breitbart News, which he described as a “platform for the alt-right.”

As Trump’s poll numbers rose and the size of his rallies swelled, the media clamored to explain what the alt-right was and often found a willing spokesman in Spencer, who gave interviews to almost anyone who would ask. He quickly became the face of the far right in America.

In 2016, Regnery boasted in a speech that tapping Spencer to lead the NPI “secured my place in history.”

Regnery and the American white nationalist movement were jubilant when Trump was elected president. At an NPI conference in Washington, D.C., a few weeks after the election, Spencer shouted “Hail Trump!” and “Hail victory!” — the English translation of the Nazi cry “Sieg Heil!”

His supporters responded with Nazi salutes. 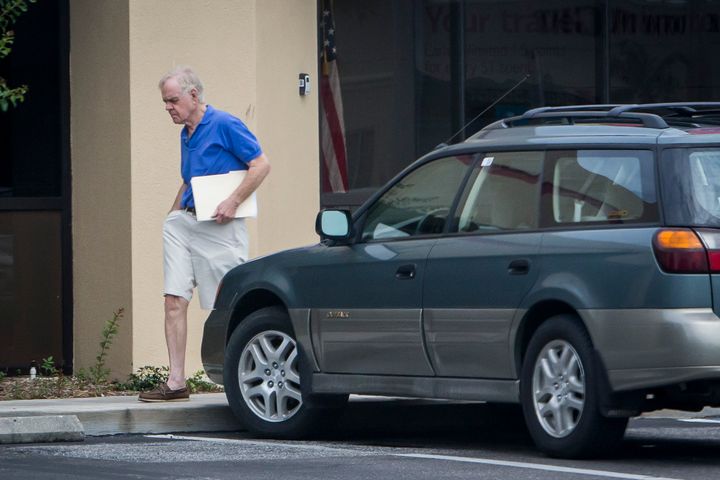 Cassie Miller, a research analyst at the Southern Poverty Law Center, told HuffPost that Regnery’s “material contributions helped to build networks of racist activists and a large body of pseudoscientific literature that, he hoped, would legitimize his calls to build a white ethnostate.”

Miller said the two major organizations he built, the Charles Martel Society and the NPI, were “once highly influential” but noted that the NPI is now “in disarray.”

“It appears to no longer be operational, and its death knell likely came earlier this year when a judge ordered NPI to pay $2.4 million in damages to an Ohio man injured at the Unite the Right rally for his physical and emotional suffering,” Miller said.

Spencer and the NPI helped organize the infamous Unite the Right rally in Charlottesville, Virginia, in 2017, where some 1,000 white nationalists marched through the streets as clashes became increasingly violent. In the most vicious attack, a neo-Nazi drove his car into a crowd of counterprotesters, killing 32-year-old Heather Heyer and injuring 19 others.

In the following months, the NPI organized a few “free speech rallies” on various college campuses but were often confronted and humiliated by counterprotesters.

Widespread anti-fascist organizing, lawsuits and law enforcement crackdowns have started undoing much of the alt-right that Regnery and Spencer helped build, but their rise did not come without consequences.

“Regnery’s real legacy is not what he built but the immense harm that he caused,” Miller said.

His death was announced on the website of Lemon Bay Funeral Home & Cremation Services in Englewood, Florida, not far from his house in Boca Grande.