A book the size of a child’s hand contains multitudes 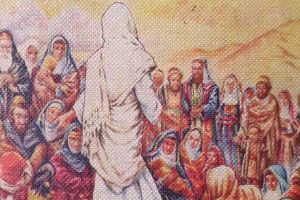 The littlest book on my shelves is also one of the biggest books in history.

It’s about 10cm by 14cm by 3cm, a little brick. You could build houses upon houses with it. Actually, metaphorically, that is indeed what has transpired across the centuries. It is the Bible. 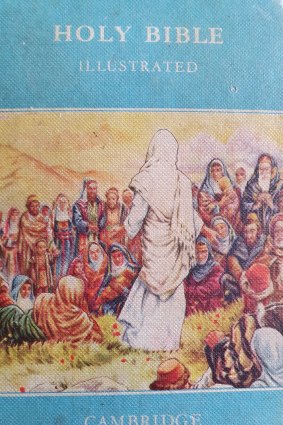 The cover of Warwick McFadyen’s copy of the Cambridge Illustrated Holy Bible.

Specifically, it is the Cambridge Holy Bible (Illustrated). I’ve had it for about 50 years. Having asked a friend from those days, I discovered it was a gift for my confirmation.

On the first left-hand page is written this:

Note the words are all upper case; they are etched in ink from a nib. No pencil here that can be easily erased; this was to be forever. I have to admire my sense of ownership.

Perhaps a young McFadyen thought that in the event of walking the streets of Kotara, Bible in hand, he might take his rest and misplace it, and lo and behold its finder would see the contact details inside. Perhaps the confirmation priest told us all to go straight home and inscribe our name to God.

I can faintly recall trying to read it as a book – start at the start, end at the end – and failing. It is too dense, literally: the type must be three-point, smaller than the racing results you would see in a newspaper. For a child, its language is dense too, forbidding and archaic, and necessarily so, for the sake and decree of tradition.

It starts: “Published by the syndics of the Cambridge University Press.” I only came across syndics much later through the Rembrandt painting Syndics of the Drapers’ Guild. Being the King James version, it begins with a dedication more than 500 years old: “To the most high and mighty prince James, by the grace of God, King of Great Britain, France and Ireland, Defender of the Faith.”

Its illustrations, such as that of the Good Samaritan, are not Rembrandt-class.

The King James version is largely attributed in its origins to the work of William Tyndale, who in the early 1500s made it his mission to translate the Testaments into English. And while he did, it cost him his life. He was found guilty of heresy and executed by strangulation, then burnt at the stake for good measure. Just to be sure, one could suppose, though more likely to remove all trace of the heretic’s life on earth.

Countless tributaries of human behaviour have run out from the river of words that is the Bible. For a child in Newcastle in the 1970s, holding a little book with its immensity of universes and history was unfathomable. It was, after all, no bigger than my hand.

Warwick McFadyen is a desk editor at The Age.