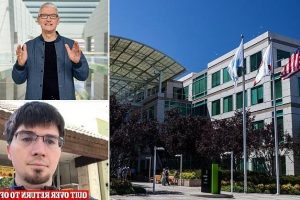 Apple is finally implementing its long-touted return to the office, with Tim Cook announcing on Monday that from September 5 all staff must be back at their desks at least three days a week.

The Silicon Valley company first announced in May 2021 that staff would be required back in the office three days a week.

One of their senior leaders, Ian Goodfellow, Apple’s director of machine learning, announced he was quitting as a result – arguing that forcing his team back to the office was not the most productive solution for his team.

He was hired by Google 11 days later.

Tim Cook, Apple’s CEO, has long pushed to get staff back to work and in a memo to staff, obtained by The Verge, said on Monday that the time had come.

‘We are excited to move forward with the pilot and believe that this revised framework will enhance our ability to work flexibly, while preserving the in-person collaboration that is so essential to our culture,’ Cook wrote. 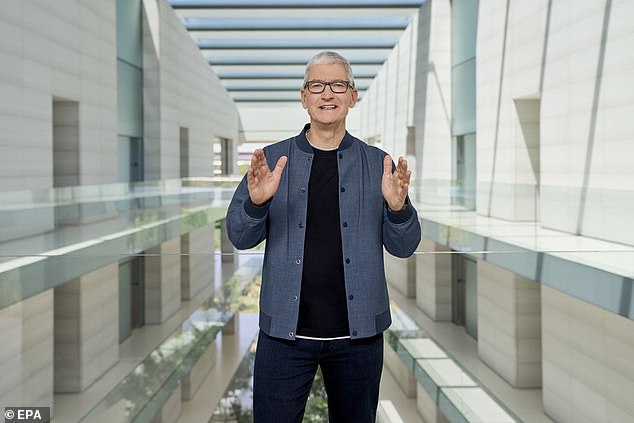 Tim Cook, the CEO of Apple, said on Monday that staff returning to the office is essential for ‘preserving the in-person collaboration that is so essential to our culture’ 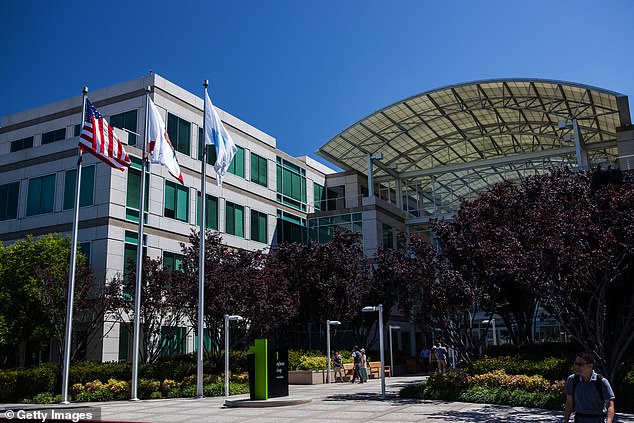 The main campus of Apple in Cupertino, California. From September 5 staff must be back three days a week

Ian Goodfellow, Apple’s director of machine learning, quit at the beginning of May in protest at their policies forcing people back to their offices three days a week

Craig Federighi, SVP of software engineering, urged employees to enthusiastically embrace the transition back to the office.

‘After years in limbo (and a couple of false starts) it’s really happening: the week of September 5th marks the true start of our hybrid work pilot in the Santa Clary Valley — and I personally can’t wait to experience the special energy of having all of us back in the office together again!’ he wrote.

The company will require employees to work from the office on Tuesdays, Thursdays and a regular third day that will be determined by individual teams.

‘I find Apple’s company-wide “return to office” policy to be misguided,’ he tweeted.

‘I joined Apple back in 2015. For nearly 5 years, I worked in the office nearly every workday. Apple was pretty hostile to remote work in general. 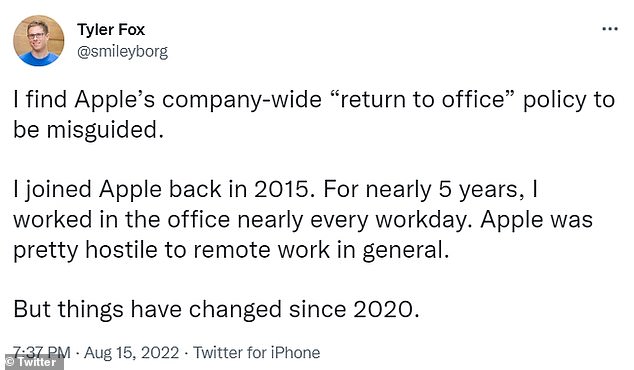 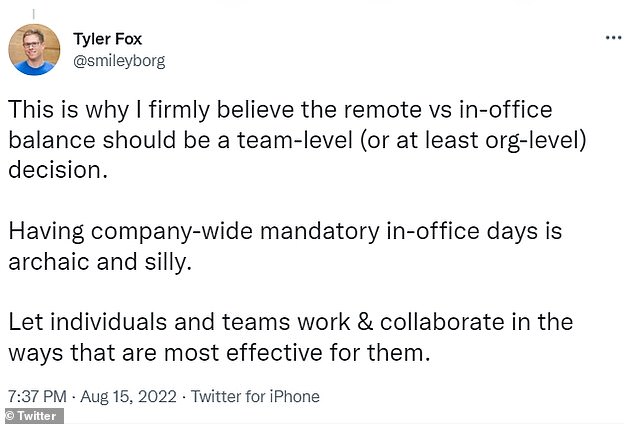 ‘Speaking specifically about software: the past 29 months have proven that for many teams, working from an office is not only unnecessary, but is actually anti-productive for many individual contributors (software engineers).

‘For me personally, I find 1-2 days in the office a week to be about right. Some weeks maybe more, other weeks fully remote, depending on what’s happening and what I’m working on.

‘This is why I firmly believe the remote vs in-office balance should be a team-level (or at least org-level) decision.

‘Having company-wide mandatory in-office days is archaic and silly.

‘Let individuals and teams work & collaborate in the ways that are most effective for them.’

Apple joins several technology and finance companies that have begun mandating a return to office as COVID cases ease.

Earlier in June, Elon Musk, the CEO of Tesla, asked employees to return to the office or leave the company. 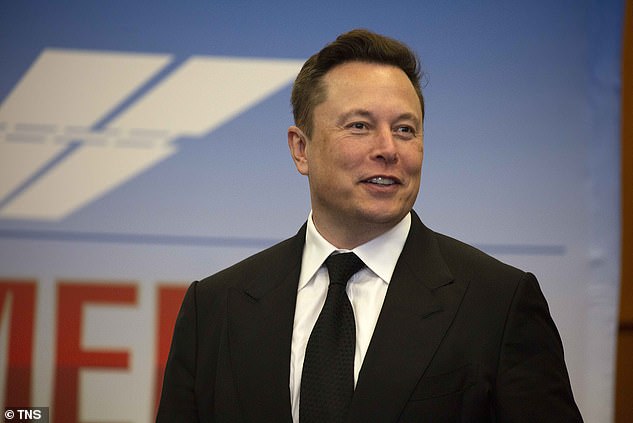 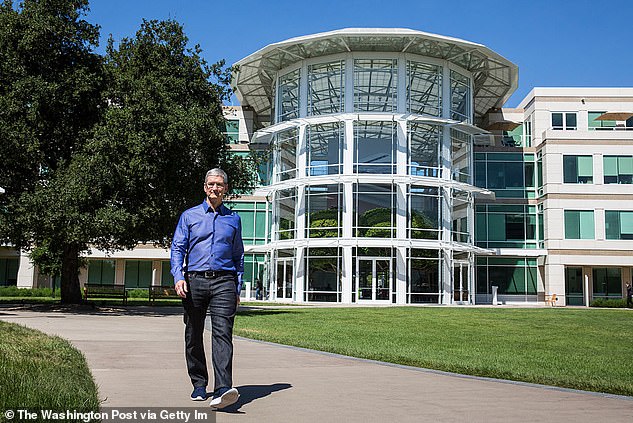 Tim Cook, the CEO of Apple, is seen at the company’s headquarters in Cupertino

Apple began on April 11 mandating one day a week in the office – a requirement that rose to two days on May 2.

By May 23, all staff were originally intended to be at their desks three days a week – but that policy was shelved in June.

A survey of Apple workers from April 13-19 found 67 percent saying they were dissatisfied with the return-to-office policy, Fortune reported.

And Goodfellow, in his resignation note, said he would not do it.

‘I believe strongly that more flexibility would have been the best policy for my team,’ he said, according to The Verge.

Cook has been adamant about the return to office of his employees – unlike other Silicon Valley firms.

In early March, he wrote to staff saying they needed to prepare to return.

‘In the coming weeks and months, we have an opportunity to combine the best of what we have learned about working remotely with the irreplaceable benefits of in-person collaboration,’ Cook said in his spring memo.

‘It is as important as ever that we support each other through this transition, through the challenges we face as a team and around the world.’

Cook acknowledged that not everyone was excited at the prospect.

‘For many of you, I know that returning to the office represents a long-awaited milestone and a positive sign that we can engage more fully with the colleagues who play such an important role in our lives,’ Cook said.

‘For others, it may also be an unsettling change.’

After the announcement, employees in internal forums vowed to quit.

‘I don’t give a single f*** about ever coming back to work here,’ one Apple employee ranted on corporate message board Blind, according to The New York Post.

‘I’m going to go in to say hello and meet everyone since I haven’t since I started and then sending in my resignation when I get home.

‘I already know I won’t be able to deal with the commute and sitting around for 8 hours.’

Another Apple employee responded with a laughing emoji and wrote: ‘I’m gonna do the same.’

Twitter, by contrast, decided to allow staff to work remotely forever, if they choose.

In March, Parag Agrawal, the CEO, told staff that the policy of his predecessor Jack Dorsey, allowing staff to work remotely forever, would remain. 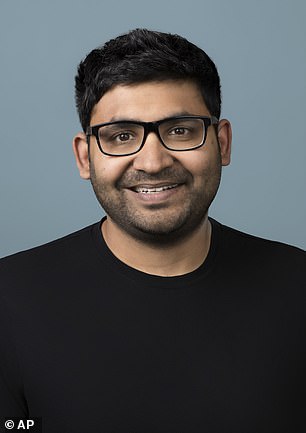 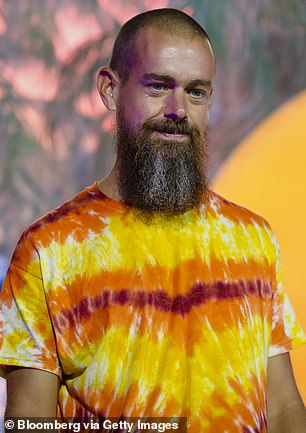 ‘As we open back up, our approach remains the same,’ Agrawal said.

‘Wherever you feel most productive and creative is where you will work and that includes working from home full-time forever.

‘Office every day? That works too. Some days in office, some days from home? Of course.’

At Facebook, the parent company Meta announced in the summer of 2020 that all full-time employees could apply to work from home if their jobs allowed it.

Facebook’s executives have been making the most of the arrangement, The Wall Street Journal reported, with Chief Executive Mark Zuckerberg spending significant amounts of time away from the Menlo Park headquarters and more time in Hawaii. 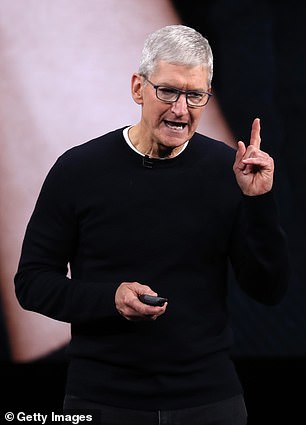 Tim Cook, the CEO of Apple, is demanding a return to the office of all staff three days a week

Alex Schultz, chief marketing officer, plans to move to the United Kingdom, according to a company spokesperson, while Guy Rosen, the company’s vice president of integrity, will be moving to Israel.

Naomi Gleit, Meta’s head of product and one of its longest-tenured employees, has relocated to New York, while Adam Mosseri, the head of Instagram, has been working remotely from locations including Hawaii, Los Angeles and Cape Cod, the paper said.

Apple and Google are the outliers, with Google demanding in March that most workers had to come back into the office three days a week from April 4.

Google employees could request remote work, if their job allowed.

The order from Google includes the caveat that employees could take pay cuts if they leave the San Francisco Bay Area or New York City for less expensive parts of the country.

An open letter signed by more than 1,050 Apple employees past and present urged leaders at the company to rethink their plans.

‘You have characterized the decision for the Hybrid Working Pilot as being about combining the ‘need to commune in-person’ and the value of flexible work,’ the letter states.

‘But in reality, it does not recognize flexible work and is only driven by fear. Fear of the future of work, fear of worker autonomy, fear of losing control.’

They write that working remotely allows them to engage with colleagues in Europe and Asia effortlessly, and argue that allowing remote work encourages diversity in the workforce. They also complain about the commute to the office, and the frustration at the waste of time.

‘We tell all of our customers how great our products are for remote work, yet, we ourselves, cannot use them to work remotely?’ they write.

‘How can we expect our customers to take that seriously? How can we understand what problems of remote work need solving in our products if we don’t live it?’