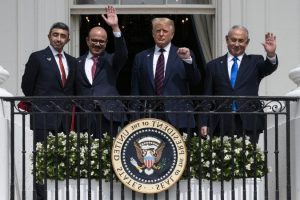 Washington: An eight-month-old accord aimed at normalising relations between Israel and the Arab world and signed at the White House is facing its first major test as violence flares from Jerusalem to Gaza. And it’s proving tricky to navigate.

Weeks of public anger over Israel’s move to expel Palestinian families from their homes in Jerusalem were already making it more difficult for the United Arab Emirates and three other signatories of the so-called Trump-era Abraham Accords to justify deepening ties. Now that’s been followed by an explosion of violence, with fighting in Jerusalem and the Hamas-run Gaza Strip leaving mounting civilian deaths, most of them Palestinians. 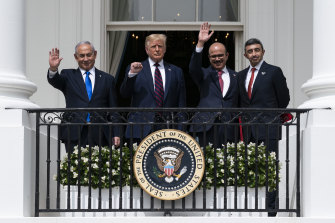 As the fighting threatens to escalate into all-out war, pressure is rising on Arab governments to take a stand. While the UAE and Bahrain are unlikely to tear up their so-called normalisation deals, at least for now, diplomats and analysts say the violence will complicate efforts to translate them from ink on paper into a genuine partnership.

The Abraham Accords signed last year under the Trump administration gave Israel “the false impression that they don’t need to come to terms with the Palestinians, that if they’re able to forge these agreements with the Arab world, then it’s irrelevant. That argument has been proved dead wrong by these clashes,” said Marwan al-Muasher, former foreign minister of Jordan, now vice-president of studies at the Carnegie Endowment for International Peace in Washington.

“Without peace with the Palestinians one can never hope for Israel to be accepted in the rest of the Arab world.”

When the UAE became the first Gulf Arab country to strike the deal with Israel last year, it focused on reciprocal economic benefits — and the incentives for peace that business would bring. Deals quickly followed. 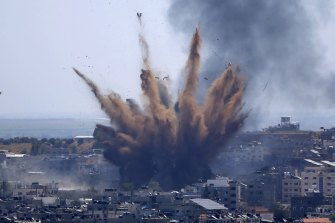 UAE officials permitted direct flights and have since mooted billions of dollars worth of investments in the Jewish state, setting up a joint $US3 billion ($3.8 billion) fund in Jerusalem along with the US. A UAE investment fund plans to buy a $US1.1 billion stake in an Israeli gas field and there have been deals on everything from oil pipelines, to soccer clubs to payments technology. The chairman of Dubai-based port operator DP World submitted a bid for Israel’s Haifa Port in October and said trade between the two nations could amount to $US5 billion a year. The UAE will be loath to give up such big commercial opportunities at the first hurdle.

What all that meant for Palestinian aspirations of statehood, a touchstone issue for generations of Arabs, was pushed aside in an effort to rethink the approach to a conflict that’s destabilised the broader region for decades.

“The security and commercial collaboration between the UAE and Israel will not be much affected by the events in Palestine,” said Laleh Khalili, professor of International Politics at Queen Mary University of London. “Likely, the Emirati state will just lower its profile and get the social media pundits writing on its behalf to tone down their criticisms of Palestinians.”

With the latest violence, the UAE has pushed behind the scenes for calm in an effort to ease pressure on the accords, a set of bilateral deals that don’t aim to resolve the Israeli-Palestinian conflict or contain any mechanism for dealing with associated strains. Diplomats who’ve followed the events closely say the UAE is beginning to grasp the limits of any leverage the deal offers in a decades-old struggle seen as existential by both Israelis and Palestinians.

The UAE is looking to seize the initiative by hosting an emergency meeting of Arab parliamentarians to discuss the situation in Jerusalem, though it isn’t clear what that could achieve. Sudan, Morocco and Bahrain also signed normalisation deals with Israel, but they’re seen as more peripheral partners in the accords, which Palestinians labelled a betrayal.

Anwar Gargash, a key UAE foreign policy adviser, defended his government against Arab opponents of normalisation, saying the Gulf nation’s stance on the Palestinian issue hasn’t changed, though it isn’t articulated in the accords.

“The UAE stands with the rights of the Palestinians and with the end of Israeli occupation, with a two-state solution and with an independent Palestinian state with its capital in east Jerusalem and this is a historical and principled stand that will not waver,” he wrote on Twitter. “How saddening are the insults that have been hurled in these endless Arab regional civil wars. Exploiting the suffering of the Palestinian people for narrow interests is not appropriate.”

More than 130 Palestinians have been reported killed in Gaza and at least eight people have died in Israel since the violence erupted late on Monday. The violence has spread to mixed Arab-Jewish cities while also threatening to escalate into the fourth war between Israel and Hamas since the group took control of Gaza in 2007.

Israel recognised the challenges, its ambassador to the UAE said, but it expected the accords to survive and was working to deepen what it sees as a strategic relationship.

“The Abraham Accords answer the interest of both countries,” Eitan Na’eh told Bloomberg. “Both countries face the same enemies, same challenges. The enemies of Israel, the enemies of peace are the radicals whether it’s Hamas or others.”

If the violence worsens or touches off a prolonged period of unrest, however, it will be increasingly difficult to imagine Israelis openly doing business or holidaying in Dubai, even if the UAE stands by its agreement.

“I’m sure the UAE is wishing it would just go away and if it doesn’t, they’ll have to be very careful, careful with their population and with the population in the wider region,” said Joost Hilterman, Middle East & North Africa Program Director at the International Crisis Group. “Though we don’t see the same solidarity with the Palestinian cause as we saw a generation ago, it hasn’t gone away altogether.”

Instead, less than eight months after they were signed, the Abraham Accords could suffer the same fate as the Egypt’s peace deal with Israel, which was struck more than 40 years ago, ending successive wars across a long shared border but never blossoming into much more. Jordan’s peace agreement with Israel was signed the year after the 1993 Oslo Peace Accords raised the tantalising prospect of an end to the Palestinian-Israeli conflict. But it’s also remained cold.

“We have seen normalisation before and we have seen how it has gone,” said Hilterman. “Security and intelligence ties will remain strong with the UAE and Israel but on a people-to-people basis, I expect this to be as cold as the peace between Jordan and Israel and between Egypt and Israel.”