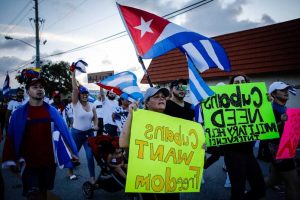 ‘This is not correct’: Florida Democrat rips AOC over Cuba statement

So far, all President Joe Biden has offered the tens of thousands of protesters risking their lives to call for freedom in Cuba are a few words of support. It’s time to do more — by acting to secure internet access on the island.

Since last Sunday, Cubans have been taking to the streets across the nation to demand freedom from the dictatorship, adequate access to food and medicine and the resignation of President Miguel Díaz-Canel. The regime responded by telling police to open fire and by shutting down Web access to stop demonstrators from communicating via Facebook, WhatsApp, Instagram and Telegram and sharing images of his goons’ violence.

In a letter to the White House, Sen. Marco Rubio (R-Fla. — and a Cuban American) outlined several steps Washington should take beyond well-wishing. The key: enabling open and free satellite Internet access.

Biden said Thursday that he’s considering it, telling reporters: “They’ve cut off access to the Internet. We’re considering whether we have the technological ability to reinstate that access.”

That sounds like a stall: The feds should know that already, since the idea’s been suggested for years, for example when Iran’s rulers shut down the Web to squelch protests — and it’s an obvious tool to help freedom-lovers around the globe in such situations.

Delay is deadly. “Time is of the essence here,” as Gov. Ron DeSantis (R-Fla.) notes: “Every day that the regime has to black out the truth is a day they can get the upper hand on this.”

But it looks like the White House is slow-walking any response — or, rather, leaving it to drawn-out interagency discussions, as Julie Chung, acting assistant secretary for the State Department’s bureau of Western Hemisphere affairs, told Politico, even as she called the idea “something that we’re very interested in promoting and advocating for.”

Sen. Lindsey Graham said last week of Biden’s slowness to even speak up in solidarity with the protesters that the prez is “like a deer in the headlights when it comes to standing up to oppression.”

That seems to extend to jumping on the internet idea.

Desperate, hungry and oppressed Cubans are waving American flags as a sign of freedom in the streets of Havana: The least Uncle Sam can do is make sure their voices ring around the world.