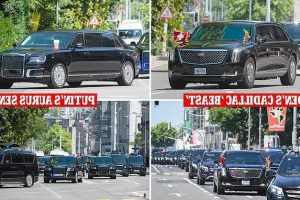 Battle of the Beasts! Biden’s indestructible stretched Cadillac squares up to Putin’s Russian Rolls Royce-lookalike limo ‘which can protect occupants while submerged UNDERWATER’

Joe Biden and Vladimir Putin arrived for their historic summit in Geneva on Wednesday in their respective motorcades with each leader being ferried in their own bulletproof and bomb-proof presidential limos.

The US president rode up in his Beast – the $1.5million Cadillac that boasts of night vision cameras, tear gas cannons, and 8 inches of armor.

Its doors weigh as much as those on a Boeing 757 aircraft and its tires are pneumatic run-flats so the vehicle can still drive even if they are deflated.

The president also can use a state-of-the-art communication system that is built into the Beast, which weighs about 20,000 pounds.

There is also a secure oxygen system and a supply of the president’s own blood in case of an emergency. 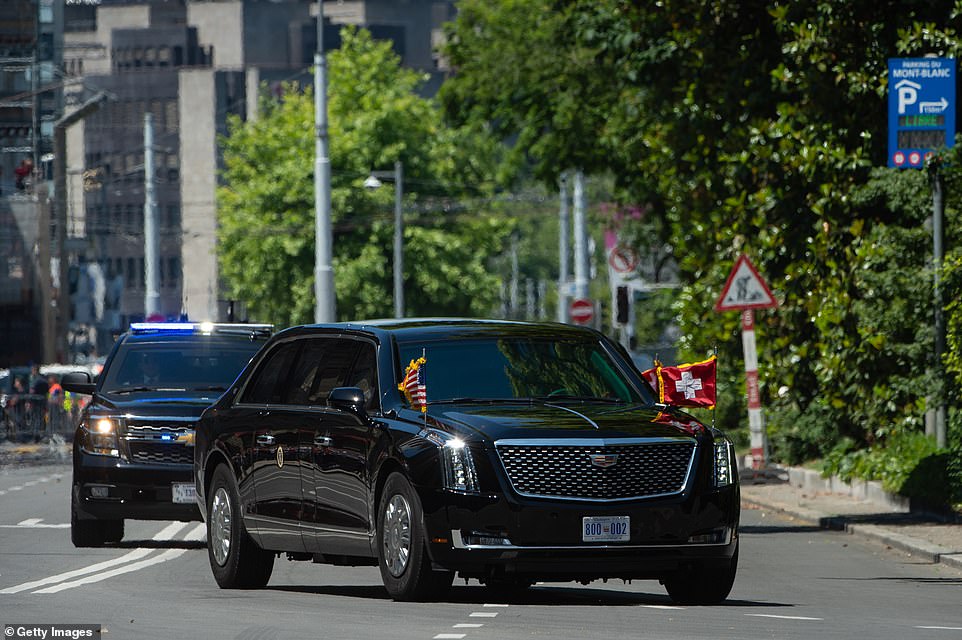 The Beast was built to withstand chemical and biological attacks as well as bullets and explosions.

The rear compartment seats the president and up to four passengers that are separated from the vehicle by a glass partition.

The president is the only one who can lower the partition with a flick of a switch.

The boot is also equipped with a firefighting system, tear, and smoke screens.

The rear seats have a satellite phone with a direct line to Vice President Kamala Harris and the Pentagon.

The Beast’s fuel tank is armor-plated and filled with special foam that prevents it from exploding even in case of a direct hit.

The vehicle’s chassis, which was developed by General Motors, is made of steel while the body of the car is a combination of steel, aluminum, titanium, and ceramic.

The Russian president boasts his very own protective limousine that can protect the leader even if submerged under water.

Manufactured by Russian luxury auto brand NAMI, the Aurus Senat is an armored limo that runs on a 598-horsepower 4.4-liter V8 engine.

The Senat, which is measured at 21.7ft long and weighs in at 14,330 pounds, includes a hybrid drive system and a 9-speed automatic transmission – enabling power to be sent to all four wheels.

NAMI is said to be in the process of manufacturing an even more powerful version of the Senat – one that boasts an 857 horsepower 6.6-liter V-12 engine.

A civilian version of the Aurus Senat is being produced by the company, which is largely state-owned.

Putin’s version costs much more given the security accessories that were added to it.

The Aurus is Russia’s attempt to compete with heavyweights like Bentley and Rolls-Royce in the luxury automotive market. 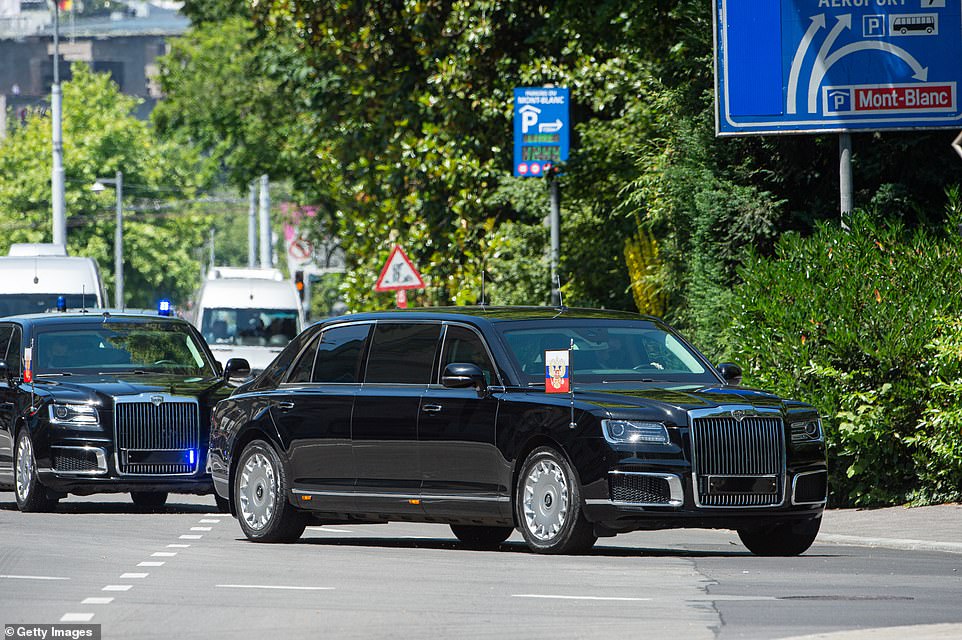 Russia has also been trying to reduce its dependence on imported goods and technology, a drive that gathered speed after Moscow was hit by Western sanctions in 2014.

Russia unveiled plans for the Aurus line of cars in 2013. Putin helped to promote its limousine model by driving it during his 2018 inauguration as president for a new six-year term.

Production of the sedan is unlikely to have a significant impact on Russia’s car industry in the near future. Industry Minister Denis Manturov said 200-300 cars would be produced this year, the Vedomosti newspaper reported.

The battle of the Beasts: How Biden and Putin’s ‘rolling bunker’ motorcades shape up against each other

. Carries pints of the president’s blood in case of a medical emergency.

. The doors weigh as much as those on a Boeing 757 aircraft

. Fitted with run-flat tires from Goodyear so it never slows down

. Carries the Cadillac branding, but is built on a General Motors truck chassis

. Is bigger than the US president’s Beast.

.  Can be submerged in water

. Tires are reinforced with steel to stop them going flat.

. Has 0.5-inch thick armor plating with a reinforced chassis

. Can withstand gunshots and landmine explosions

How the ‘Beast’ has changed over the years

The presidential state car has taken on many guises over the years since the first model in 1939 to the current model that hit the roads in 2018, according to Vanarama.

Here are the different ‘Beasts’ and some of their key features:

The first version of the presidential car that became known as the ‘Beast’ was the Lincoln K Sunshine Special used by President Franklin D. Roosevelt from 1939 until 1942.

Features included a two-way radio, extra-wide running boards and handles for Secret Service agents to grab and ride on the outside of the car.

After the attack on Pearl Harbor in 1941, armored doors, bulletproof cars and machine guns were added to the car.

1942: The first with protective armor

Built during the Second World War, the 1942 Lincoln Custom was the first presidential car fitted with protective armor.

The armor made the car 7,000 pounds heavier so had to be fitted with a Bendix Aviation brake servo, to help the driver slow the car down.

When Harry Truman was elected president in 1948 he changed the chosen carmaker from General Motors to Ford – supposedly because GM wouldn’t let him use its cars during the White House race.

The car was modified by President Dwight D. Eisenhower in 1954 to include the ‘bubble-top’ so people would be able to see him in the car if the roof was up.

Four versions of the Lincoln Continental were made between 1961 and 1972.

In 1963, President John F. Kennedy was riding in the car with the code name SS-100-X when he was shot dead, spelling the end to the open-top presidential car and sparking a ramp-up of bulletproof materials and armor plating.

Cadillac made its first presidential car – the Fleetwood – for President Ronald Reagan.

President George H. W. Bush commissioned the Lincoln Town Car in 1989, marking the last Lincoln car used as Cadillac has supplied the cars ever since.

It had an updated powertrain to allow for the extra weight from the fortified vehicle.

The Cadillac Fleetwood made a return with the addition of communication systems inside for President Bill Clinton to take calls while on the move.

It could also reach speeds of up to 142 MPH.

The 2001 presidential car – the Cadillac DeVille – is thought to have been most high-tech car in the world at the time with an infrared night vision system.

It also reportedly carried an emergency supply of blood.

2005: The car with partitions inside

The one of a kind Cadillac DTS hit the roads in 2005 with five-inch-thick armor panels, windows that cannot be opened, run-flat tires and a glass partition between the driver and the back seat.

2009: The most technologically advanced protection vehicle in the world

The Cadillac One was the presidential car from 2009 to 2018, and was described as the ‘most technologically advanced protection vehicle in the world’ with five-inch-thick bombproof glass and a sealed interior to prevent against chemical attacks.

It was used for President Barack Obama’ inauguration.

The newest limo – now known as the Beast – used by President Donald Trump is an updated version of the 2009 model and has been dubbed a ‘rolling bunker’.

Features include a foam-sealed fuel tank to prevent it exploding while inside there is also high-tech comms systems and an oxygen and blood supply.