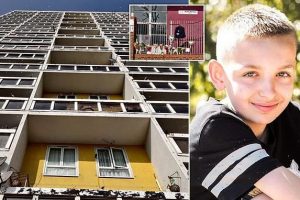 Budding astronomer, 14, accidentally fell to his death from 7th tower block balcony at his grandparents flat after ‘trying to look at the stars’ inquest hears

A 14-year-old boy who tragically fell to his death from a seventh floor balcony in East London may have been ‘trying to look up at the stars’.

Marcel Bruchal, from Newham, was at his grandparent’s house in Bow when he plummeted onto the tarmac at around 9.15pm on March 19.

At the inquest a family member recalled him looking over a balcony ‘in a weird way’ twice before his death.

An ambulance got to the scene for 9.35pm and found a badly injured Marcel in cardiac arrest. He died later at Royal London Hospital.

Marcel was ‘well liked’ and ‘respected’ student at Oasis Academy Silvertown, in North Woolwich, who had a love of astronomy.

A devastating statement by his grandma Iwoulia Wozniak recalled their last moments together before his tragic death.

She said: ‘That evening was a very starry night and there was a comet going past. Maybe he lent out to have a look…We know for sure Marcel did not plan it.’ 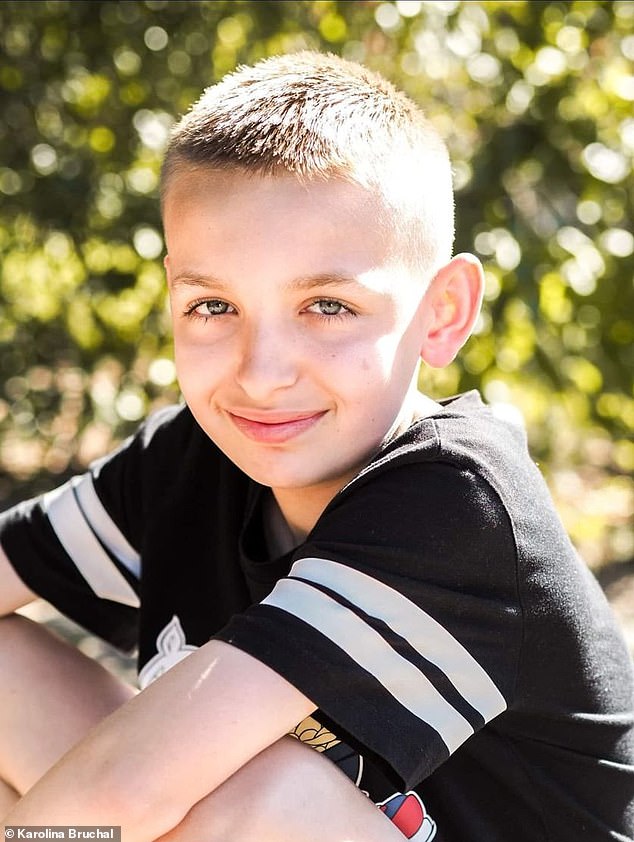 Marcel Bruchal, 14,who was a budding astronomer may have fallen after ‘trying to look up at the stars’ 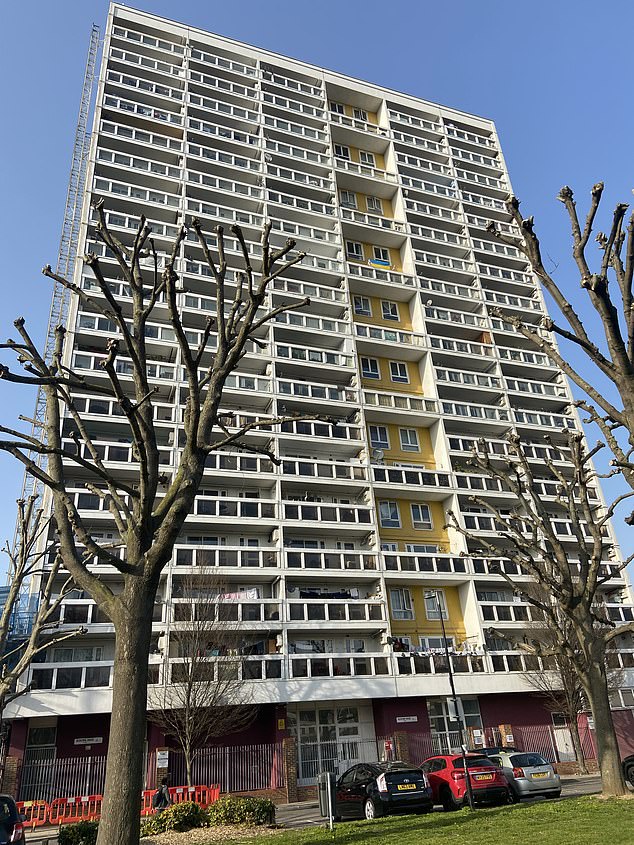 The 14-year-old fell from his grandparent’s seventh floor balcony onto the tarmac in Bow, East London

The inquest heard how Marcel and another family member were ‘very excited’ to stay with Marcel’s grandparents and they had a ‘fantastic time’ and they ‘danced around’.

His grandmother Iwoulia said: ‘While we were dancing salsa Marcel left to go to the toilet for a while.

‘A family member followed him out and he saw Marcel standing by the balcony and looking down. He described Marcel looking at it in a weird way.’

Iwoulia then took them to Tesco to shop and noted Marcel was ‘joined at my hip’ and ‘thought it was weird at the time’. But Marcel’s mother Karolina told her it was normal and he was ‘clingy’.

Iwoulia remembered opening the balcony door and Marcel and the family member went outside. 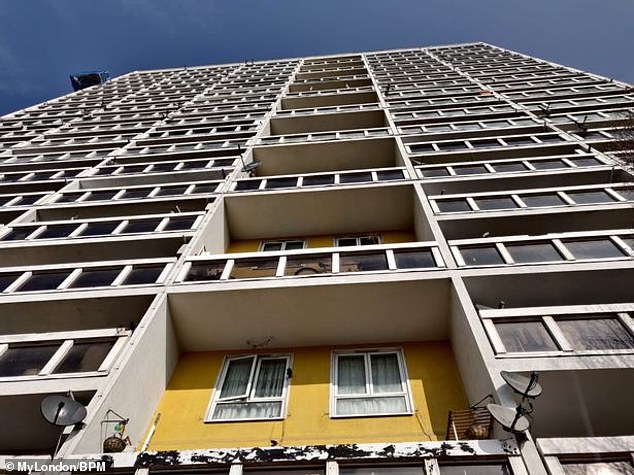 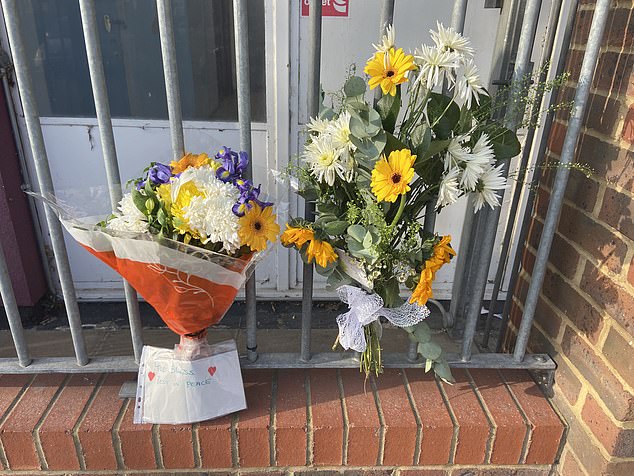 Tributes and flowers have been left near where Marcel fell, with Marcel’s family describing his as, ‘beloved, beautiful, smart, intelligent and sensitive’

Iwoulia’s world suddenly turned upside down as she heard the cries of the family member.

‘He grabbed my hand and took me to the balcony. I looked out over the balcony, I did not know what he wanted me to look at. I was told ‘Marcel is laying there’.

‘Then I recognised Marcel’s top, we ran out of the block and we saw him laying there. He was not on the pavement, he was laying far from the building.

‘My husband moved him around a bit, but I was shouting hysterically, I was shaking.

‘I told my husband not to touch him, because I wanted to cover him up with the patchwork but at that point the ambulance turned up.

Iwoulia said she did not know why Marcel ‘might have jumped’.

The family member told her Marcel was bullied at school and she recalled an incident a few months earlier where ‘there was a boy making smacking noises at him and saying ‘are you gay?’.

Despite this, she added: ‘I do not think bullying was the reason.’

Marcel was a ‘great student and loved astronomy’ and they were not aware of ‘mental health issues’, according to his grandma.

She guessed: ‘That evening was a very starry night and there was a comet going past. Maybe he lent out to have a look…We know for sure Marcel did not plan it.’

He said: ‘I was on my way downstairs when I heard a family member screaming ‘Marcel no Marcel no Marcel why?’… I was pulled over towards the balcony and all three went there. I looked over the side and saw Marcel laying on the floor.

‘I was not aware of any problems Marcel was having to make him do this.. I know there were some small issues at school a few months ago, I can only think something triggered this we are not aware of, or a very unlucky accident.’ 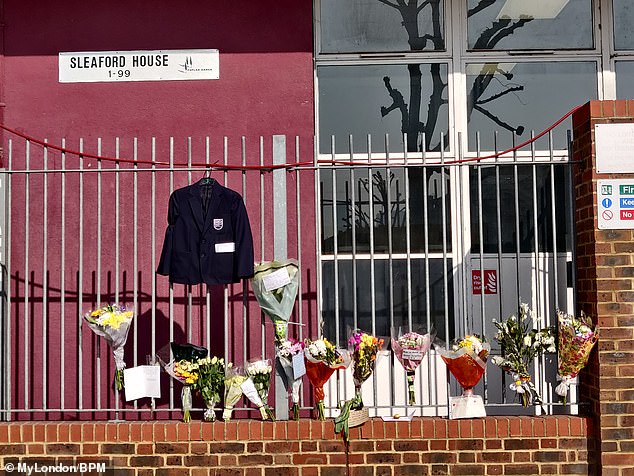 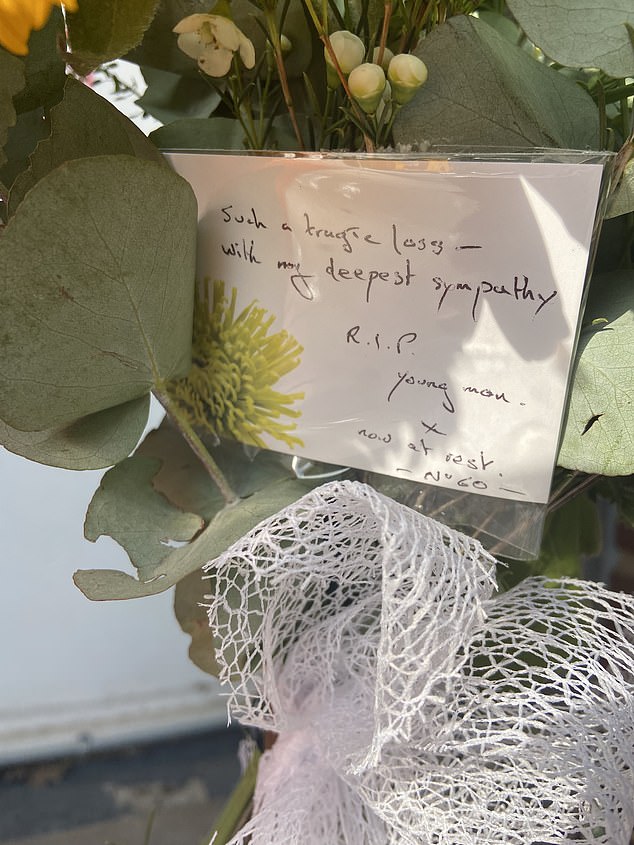 Floral tributes have been left to him, including this one which says: ‘Such a huge loss – with my deepest sympathy. RIP young man’

A family member said Marcel had gone out to the balcony ‘three to four times’ and would often ‘go on his tiptoes using his hands to grab himself up to get a better view and put his head over to look at the ground’. But, the final time they saw Marcel do this they told him to come inside.

Marcel’s father attended the court and wept as coroner Mary Hassell read the distressing evidence onto the record and said he was ‘not aware of any bullying’.

In an investigation into his death, detectives found ‘nothing untoward’ after checking his mobile phone for messages with evidence of bullying or searches for suicide.

They also found no suicide note after looking in his school bag.

Police were also confident he was well cared for by his family.

Oasis Academy acting principal Emily Boxer said: ‘Marcel was well liked, respected, and appeared happy at school. Students described him as very loyal, calm, and a kind friend. They said he had a big future.’

A toxicologist ruled there was nothing abnormal in Marcel’s blood test and a pathologist ruled his death 1A Multiple Injuries after ‘devastating’ damage to his body from the fall. 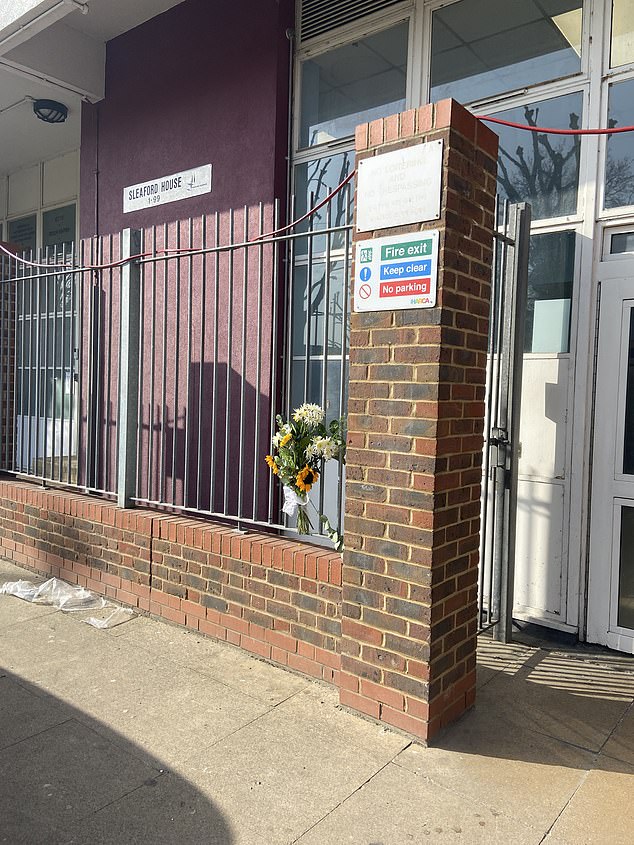 Concluding the hearing, Coroner Mary Hassell said: ‘Some elements of how Marcel died are clear to me, but some are more difficult to understand. No other person was involved with that.

She remarked he ‘obviously developed an interest in getting up on balconies’ and maybe his ‘love of astronomy’ could have led him to look at the stars.

‘The likelihood is that he fell from the balcony and that this was an accident fall.’

Leading tributes after his death, Marcel’s mum Karolina Bruchal said: ‘In our lifetime, we never thought we would be in this situation. My worst nightmares never thought I would ever write these words.

And I write because we are so lethargic and helpless, because we would like to wake up so much. There are no more tears. Our beloved, beautiful, smart, intelligent and sensitive Marcelek.’

A letter, left by his grandparents at the scene, read: ‘Dearest Marcel, it is hard to put in words how empty our lives have become one day to another. You will stay in our hearts forever, you will always be our beloved first grandson.

‘We love you more than life itself, as hard as it is only possible. We are in despair and feel an overwhelming emptiness without you. Grandma and Grandpa.’