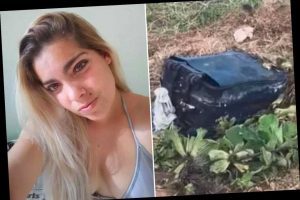 Poverty in Brazil triples to 27 million due to pandemic

Brazilian gang members allegedly recorded themselves killing a 21-year-old woman, chopping up her body and stuffing the pieces into a suitcase — which was later found by workers in a drainage ditch when her arm got loose and floated to the surface, according to reports.

Gabriela Lima Santana is believed to have been butchered in a bathroom in a suspected retaliation against a rival gang, The US Sun reported, citing local media reports.

She was first reported missing March 13 but is believed to have disappeared much earlier, according to the news outlet.

Municipal workers in Capao da Canoa discovered her remains when they were operating an excavator to remove garbage in the area.

One of Santana arms reportedly fell out as a worker used the heavy machine to remove the luggage in front of terrified employees, the outlet reported. The limb landed in the water and floated to the surface.

The victim’s head, torso, legs and other arm were recovered from the suitcase by forensics experts, The US Sun reported, citing news outlet Caboco.

Along with the body parts, investigators found saws and knives believed to have been used to dismember the young woman. The suitcase also contained rocks, which were evidently placed inside to make it sink.

The victim was reportedly identified by her fingerprints and distinctive tattoos, one allegedly associated with a local gang.

The gruesome discovery led investigators to review a shocking video they had received earlier in which a woman was seen being hacked by a smiling killer inside a bathroom.

It was unclear how the horrific video was obtained by police, who have arrested two suspects, including a 23-year-old who allegedly recorded the footage, the outlet reported.

Two other suspects are being sought.