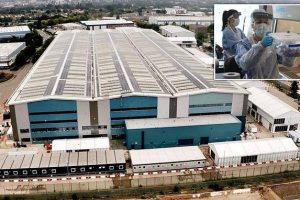 Britain’s first Covid mega-lab opens: No10 unveils Leamington Spa facility that will process up to 300,000 swabs a day

Britain’s first testing ‘mega-lab’ opened today with the goal of processing hundreds of thousands of Covid swabs every day.

Health Secretary Sajid Javid claimed the massive facility in Leamington Spa would be the ‘centrepiece’ of the UK’s pandemic response when lockdown is lifted.

Operating as part of the NHS test and trace network, ‘disease detectives’ at the lab will aim to limit the spread of the virus through testing.

The lab will create up to 1,500 jobs. Ministers are planning to launch another mega-lab in Scotland.

Between the two facilities, ministers hope to be able to carry out 600,000 extra tests per day, on top of the one million-plus being carried out already.

Many of the daily tests are done using lateral flow devices and so do not need to be sent to labs like the gold-standard PCR ones.

The new mega-lab is bigger than the Government’s Lighthouse facilities which have done the bulk of PCR tests during the pandemic and can process more than 70,000 swabs every day. The Rosalind Franklin Laboratory, which was opened today, will process up to 150,000 Covid tests a day, speedily detect new variants of concern and identify future disease threats 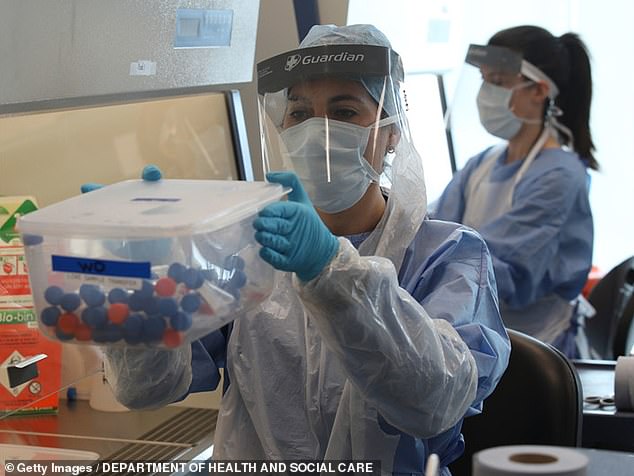 Up to 1,500 staff will work at the Rosalind Franklin Laboratory in an effort to process up to 150,000 tests every day, giving the UK a greater capacity to carry out surge testing

More than 200million coronavirus tests have been taken in the UK since the first two patients were diagnosed last January.

But demand for tests is expected to notch up to record levels in the coming weeks, with ministers bracing for up to 100,000 cases a day by August following Freedom Day on July 19.

The publicly-owned lab is named after Dr Rosalind Franklin, the English chemist who identified the structure of DNA and viruses. The Cambridge University-educated scientist died in 1958.

Baroness Dido Harding — the former head of NHS Test and Trace — today insisted the scheme has been a success, despite SAGE saying the scheme has failed to slow the pandemic.

She told MPs she was ‘proud’ of the work done by the £37billion much maligned Covid contact tracing system.

Facing a grilling on the scheme, Baroness Harding said the scheme had achieved its goal of helping break the chains of transmission.

Baroness Harding quoted a Government study suggesting the scheme has reduced transmission by ’18 to 33 per cent’.

Her comments come after the Scientific Advisory Group for Emergencies (SAGE) said the system had a ‘marginal’ impact on tackling the virus because it neither tests nor traces enough people.

Test and Trace has been allocated a £37billion budget for two years — £18.5billion-a-year — but has already burned through £23billion of that cash according to figures released earlier this month.

Baroness Harding’s tenure was criticised by former Treasury chief Lord Macpherson, who accused her of presiding over ‘the most wasteful and inept public spending programme of all time’.

Meanwhile, Boris Johnson urged the nation not to delete the NHS Covid-19 app, amid fears millions of Brits will be ‘pinged’ and told to self-isolate every week after ‘Freedom Day’.

He told the public to stick with it ‘for a little bit longer’, with people who have had both vaccinations forced to isolate until August 16 — six weeks after all restrictions were supposed to end on July 19.

The UK Health Security Agency (UKHSA) — established in April to plan, prevent and response to health threats — will oversee the facility.

The Department of Health said the lab will ‘play an indispensable role in responding to new variants of concern and future disease threats’.

As well as providing extra testing capacity to keep future outbreaks under control, the lab will also carry out genomic sequencing of positive samples.

It will use machines that can analyse the samples for mutations in just two days.

Mr Javid said: ‘The UK Health Security Agency is going to put us at the forefront of the global battle against Covid and help us stay a step ahead of new and emerging future threats.

‘Trailblazing technologies are going to be pivotal to delivering on this bold ambition and I’m delighted that today we are bolstering our capabilities in testing and genomic sequencing with the opening of the Rosalind Franklin Laboratory.

‘This Laboratory will be one of the centrepieces of our efforts to manage this virus in the future, processing hundreds of thousands of positive Covid tests a day to help us stop cases becoming outbreaks.

‘Testing has already been instrumental in helping us control the virus and it is going to be essential to continue to protect ourselves and our communities in the months ahead. I’d urge everyone to take up our offer of free, twice weekly rapid testing.’

Dr Jenny Harries, chief medical officer of UKHSA and one of the top advisers to the Government throughout the pandemic, said: ‘Our mission at the UK Health Security Agency is to learn the lessons of this global pandemic and positively harness them in how we prepare and steel ourselves against future health threats.

‘The pandemic has provided us with clear evidence, on a daily basis, that you can only challenge viruses of this kind with the right testing and genomics infrastructure in place.

‘The Rosalind Franklin Laboratory is going to be a critical scientific addition to how we manage this virus in the months ahead, arming us with data and intelligence on the spread of variants that will inform decision-making and ultimately, save lives.’

Since the beginning of the Covid pandemic, the Government has built a network of diagnostic testing facilities.

This includes seven in the UK ‘Lighthouse laboratories’ that process Covid tests for NHS Test and Trace.

However, both the labs and the scheme — which was run by Baroness Dido Harding —  have been criticised for their response to the pandemic.

SAGE said the £37billion Test and Trace programme only had a ‘marginal’ impact on tackling the virus because it neither tests nor traces enough people.

Last September, genomics scientist and inventor Phil Robinson said the the labs were poorly managed, running out of staff and had failed to set up automatic processes.