British citizens told to flee Myanmar due to 'rising violence' 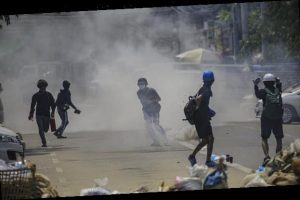 Britain on Friday advised its citizens to flee Myanmar, as a UN expert warned the junta is likely committing ‘crimes against humanity’ in its attempt to stay in power.

The military authorities are cracking down with increasing severity on daily protests against their February 1 coup, with at least 70 people killed according to the UN’s top rights expert on the country.

The turmoil prompted Britain, the country’s former colonial ruler, to urge its citizens to get out if they could, warning that ‘political tension and unrest are widespread since the military takeover and levels of violence are rising’. 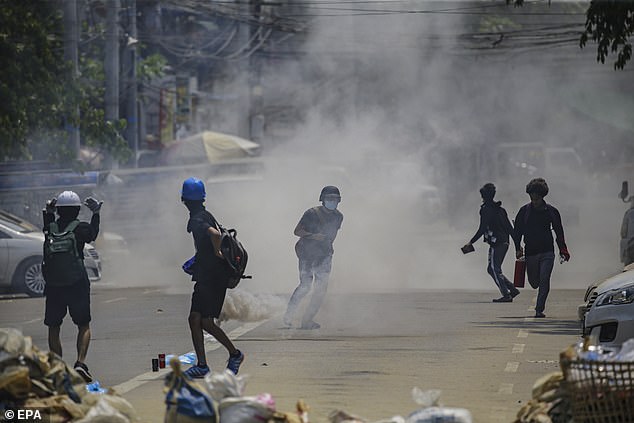 Britain, Myanmar’s former colonial ruler, has told its citizens to leave the country immediately due to rising levels of violence being used by the military junta to crush protests 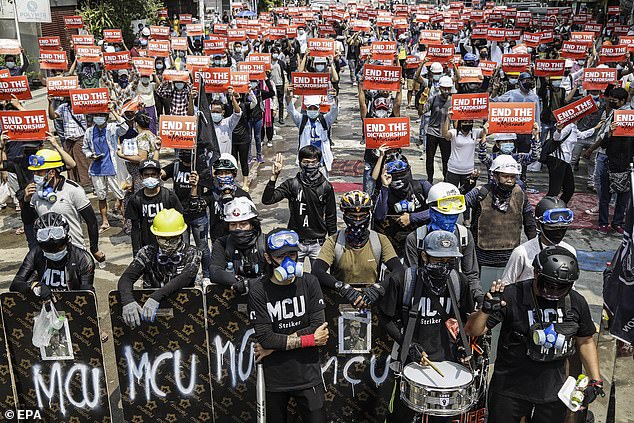 At least 70 pro-democracy protesters have been killed during daily marches demanding an end to military rule, after Myanmar’s general seized power in a February 1 coup 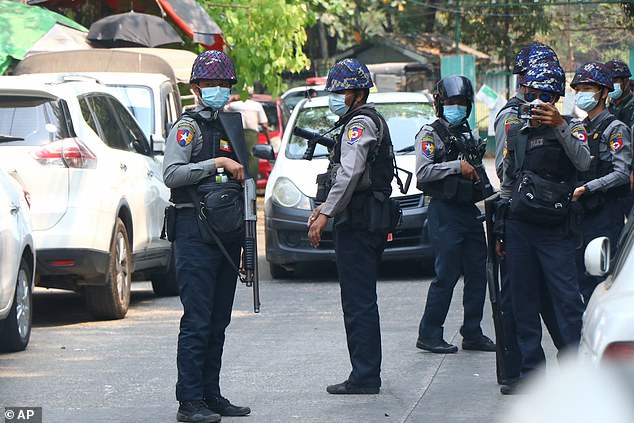 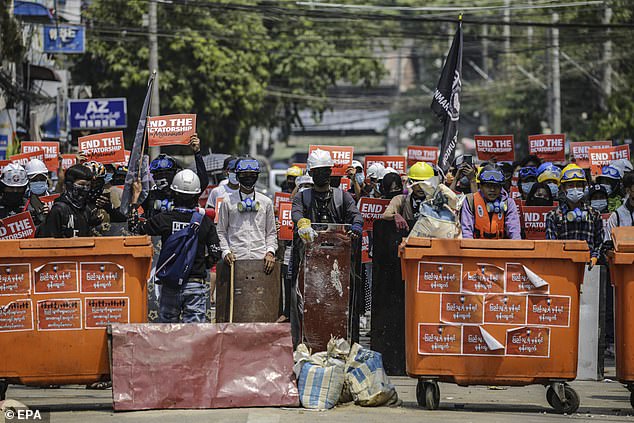 ‘The Foreign, Commonwealth & Development Office advises British nationals to leave the country by commercial means, unless there is an urgent need to stay,’ the British foreign ministry said.

The move comes after Thomas Andrews, the UN Special Rapporteur on human rights in Myanmar, gave a stark assessment of the crisis.

The country is ‘controlled by a murderous, illegal regime’ that was likely committing ‘crimes against humanity,’ Andrews told the UN Human Rights Council in Geneva.

While stressing that such offences can only be determined in a court of law, he said there was clear evidence that the junta’s crimes were ‘widespread’ and part of a ‘coordinated campaign’.

Thursday saw at least nine protesters killed in different parts of the country, including six in central Myanmar’s Myaing township – five of them shot in the head, according to a witness.

Rights group Amnesty International released a major report on the crisis on Thursday, accusing the junta of using battlefield weapons on unarmed protestors and carrying out premeditated killings.

International pressure has been building on the generals, but they have shown no signs of heeding calls for restraint, continuing to try to quell daily protests by force.

The United Nations on Wednesday condemned the crackdown, which has seen more than 2,000 arrested, with even traditional Myanmar ally China calling for ‘de-escalation’ and dialogue.

Junta spokesman Zaw Min Tun said the detained chief minister of Yangon admitted giving Suu Kyi $600,000 in cash, along with more than 11 kilograms ($680,000 worth) of gold. 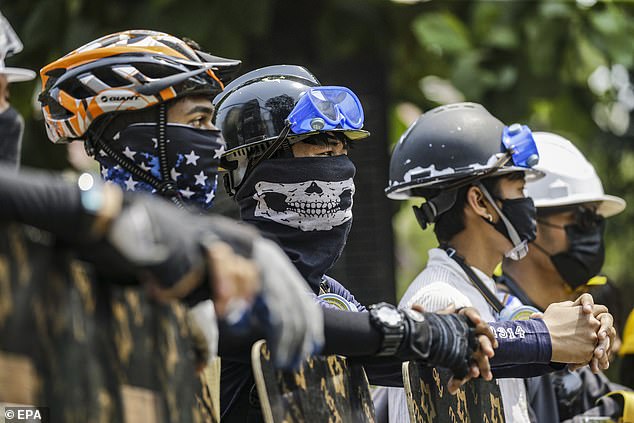 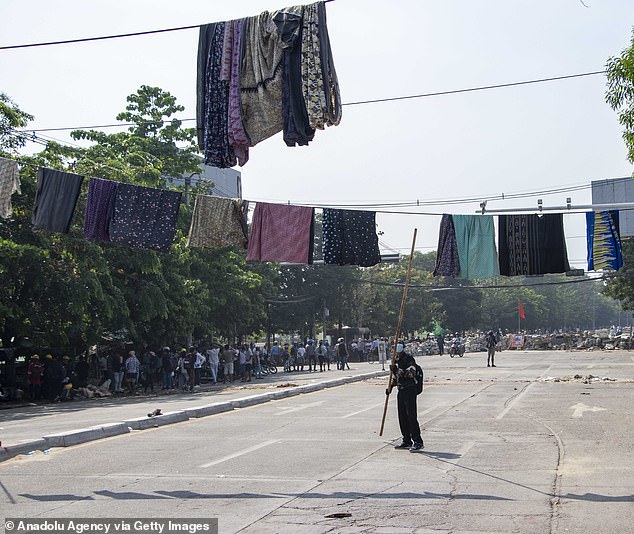 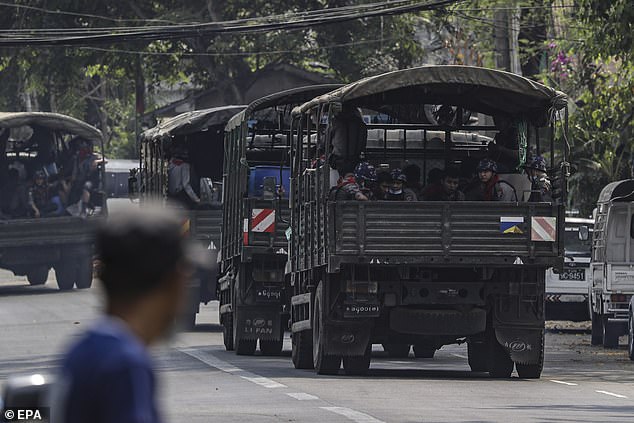 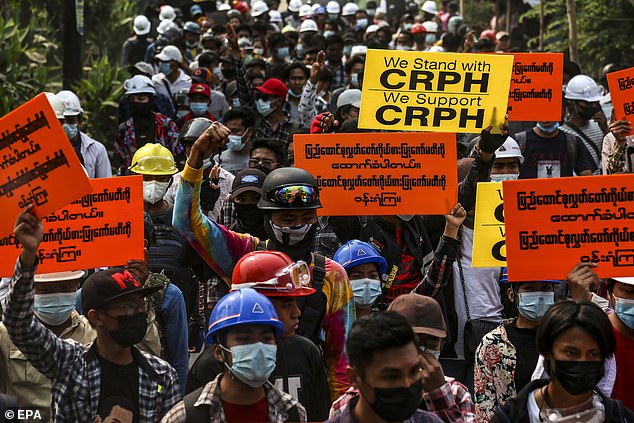 On Thursday state-run media announced that the Arakan Army (AA) – which fights for autonomy for the ethnic Rakhine people in northern Rakhine state – was no longer considered a terrorist organisation.

Observers say the move indicates the military is trying to avoid spreading itself too thinly, aiming to concentrate its forces on quelling the protests.

The AA has been fighting the army for years, with hundreds killed and some 200,000 civilians forced to flee their homes.

As well as using tear gas, rubber bullets and live rounds to break up street protests, the military authorities have also carried out regular night raids, searching apartments and making arrests after dark.