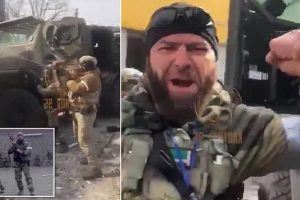 A brutal sect of Chechen soldiers executed ‘heavily wounded’ Russian troops in a hospital that lies northwest of Bucha, witnesses have claimed.

The Kadyrovtsy, who have been used as a PR tool in Vladimir Putin’s war, allegedly murdered their own comrades and ‘operated a torture chamber’ in a glass factory on Yablonska Street – confirming previous reports by Ukraine’s ombudsman for human rights, Lyudmila Denisova.

Artem Hurin, a member of the city council of the neighboring town of Irpin who also serves as a deputy commander in Ukraine’s Territorial Defense Forces, was one of the first to visit Borodyanka, northwest of Bucha, after the Russians retreated last month.

He said: ‘They would bring heavily wounded Russian soldiers to a big hospital they had there, and those who were very heavily wounded, they would just shoot them. No one other than the Kadyrovtsy did this.’

Hurin recalled the horrifying stories of torture and rape from residents and saw evidence of ‘executed civilians’ who lay on the street, the Daily Beast reports. 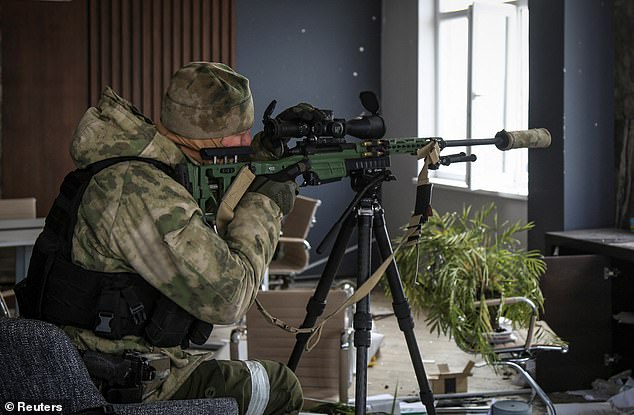 A brutal sect of Chechen soldiers executed ‘heavily wounded’ Russian troops in a hospital that lies northwest of Bucha, witnesses have claimed. Pictured: A service member from Chechen Republic aims his rifle 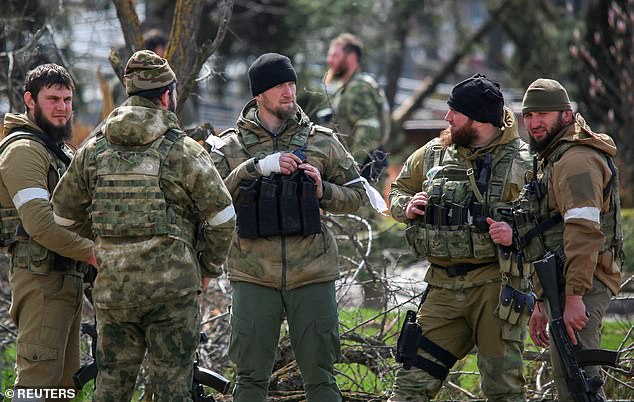 The Kadyrovtsy, who have been used as a PR tool in Vladimir Putin’s war, allegedly murdered their own comrades and ‘operated a torture chamber’ in a glass factory on Yablonska Street

According to residents of the town, the killer squad of Chechen fighters – known as Kadyrovtsy – had executed people as early as March 5.

One woman recalled how she endured four days of torture by one Kadyrovtsy soldier and one Belarusian soldier before they brutally shot her husband in the head.

Meanwhile, the Bucha Mayor, Anatoliy Fedoruk, claimed Chechen troops tied white bands around prisoners’ arms who were captured that were similar to those found on the bodies of executed civilians.

Opening up about civilians who attempted to leave their homes to get food and water, Hurin added: ‘They didn’t allow them to do anything. There they just killed people through binoculars for example. They just shot them.’

Many Chechen soldiers were fighting alongside the Russian military, which waged two wars against Chechnya – a Muslim republic in southern Russia – between 1994 and 2000.

This comes as the towns around Kyiv which were recaptured by Ukrainian forces have revealed horrific atrocities, with the bodies of hundreds of dead civilians piled up after Putin withdrew his band of thugs. 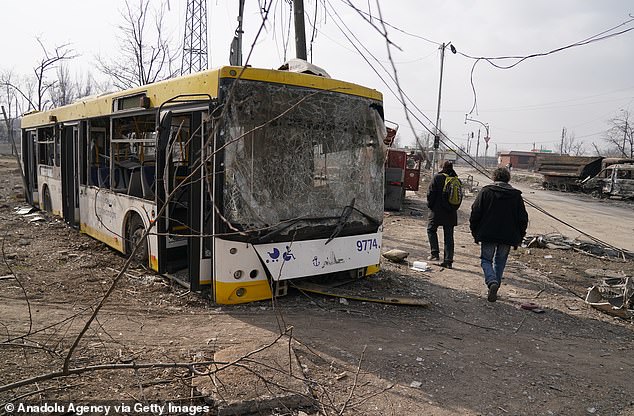 One woman recalled how she endured four days of torture by one Kadyrovtsy soldier and one Belarusian soldier before they brutally shot her husband in the head. Pictured: A wrecked bus is seen as civilians are being evacuated along humanitarian corridors from the Ukrainian city of Mariupol

Russia has denied targeting civilians despite the many stories of gang rape, sexual abuse in front of children, torture and executions to emerge from the barbaric war.

A United Nations mission to Bucha documented ‘the unlawful killing, including by summary execution, of some 50 civilians there’, the UN’s Office of the High Commissioner for Human Rights said.

Forensic tests carried out on civilian corpses dumped in mass graves in the Kyiv region show women were raped before being brutally killed.

Dozens of autopsies have been carried out on mutilated corpses from Bucha, Irpin and Borodianka, with many showing signs of torture and multiple bullet holes in the back. 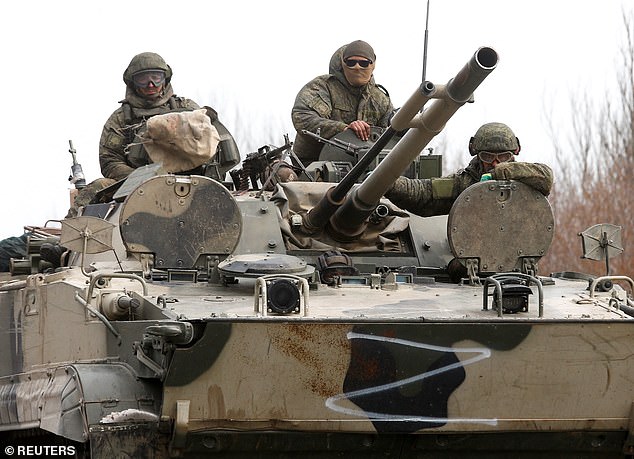 Russia has denied targeting civilians despite the many stories of gang rape, sexual abuse in front of children, torture and executions to emerge from the barbaric war. Pictured: Service members of pro-Russian troops drive an armoured vehicle during Ukraine-Russia conflict on a road outside the southern port city of Mariupol

Some have been so badly disfigured or even decapitated that investigators have been unable to identify them.

Vladyslav Pirovskyi, a Ukrainian forensic doctor who carried out the autopsies, told The Guardian: ‘We already have a few cases which suggest that these women had been raped before being shot to death.

‘We can’t give more details as my colleagues are still collecting the data and we still have hundreds of bodies to examine.’

His team has been analysing 15 bodies a day, with most killed by automatic gunfire.

He added: ‘There are many burnt bodies, and heavily disfigured bodies that are just impossible to identify.

‘The face could be smashed into pieces, you can’t put it back together, sometimes there’s no head at all.’

The evidence has been passed on to the region’s senior prosecutor, Oleh Tkalenko, for further investigations.

Last month, a group of Chechen fighters were seen firing heavy machine guns towards residential buildings in Ukraine’s besieged city of Mariupol, on a video released on TikTok.

The soldiers, dressed in camouflaged military gear, pumped their fists to the camera and could be heard shouting ‘allahu akbar’.

On his Telegram channel, Kadyrov claimed his fighters were clearing ‘the territory of the Nazis’ – parroting a line used by Russian president Vladimir Putin and his propaganda machine to justify the invasion of Ukraine.

Mariupol has seen some of the most intense fighting since Putin ordered his armies into Ukraine on February 24. Russian forces have been shelling the city indiscriminately, razing large swathes of the city.

Officials say at least 2,400 civilians have been killed in the southern port city, but it is feared that the true toll is much higher. One official said earlier this month that he feared as many as 20,000 people could have been killed.

The Chechen military is known for its Hollywood-inspired videos claiming to show their soldiers in action, while actually showing them doing very little. Experts say the videos are just another branch of Putin’s propaganda efforts.

Kadyrov’s video also showed his soldiers climbing through the window of a building, seemingly to help a civilian out. However, while the soldiers were passing a mattress between then, the footage did not actually show anyone being carried.

Instead, one grinning fighter wearing sunglasses panned his camera around to show the scene of devastation around him, in a style that – anywhere else in the world – could be mistaken with a selfie-video from an Instagram influencer.

Chechen troops have been embedded in the National Guard of Russia and have been fighting in Ukraine since the start of the invasion.

One squad of Kadyrov’s fighters was reportedly sent to try and assassinate Ukraine’s president Volodymyr Zelensky, but was destroyed by Ukraine’s forces.

Ukrainian President Volodymyr Zelensky switched into Russian in his nightly video address to urge Russian soldiers not to fight in Ukraine, saying even their generals expected that thousands of them would die.

He said Russia has been recruiting new troops “with little motivation and little combat experience” for the units that were gutted during the early weeks of the war so these units can be thrown back into battle.

He said Russian commanders fully understand that thousands of them will die and thousands more will be wounded in the coming weeks.

“The Russian commanders are lying to their soldiers when they tell them they can expect to be held seriously responsible for refusing to fight and then also don’t tell them, for example, that the Russian army is preparing additional refrigerator trucks for storing the bodies,” Mr Zelensky said late on Saturday.

“They don’t tell them about the new losses the generals expect. Every Russian soldier can still save his own life. It’s better for you to survive in Russia than to perish on our land.”

It comes as Sweden said a Russian military plane violated Swedish airspace. The incident happened late on Friday in the Baltic Sea near the island of Bornholm.

In a statement on Saturday, the Swedish Armed Forces said a Russian AN-30 propeller plane flew toward Swedish airspace and briefly entered it before leaving the area.

Sweden and neighbouring Finland are both considering Nato membership following Russia’s invasion of Ukraine. Moscow has warned that such a move would have consequences, without giving specifics.