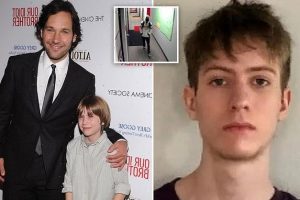 Child actor Matthew Mindler, 19, is found dead near his college campus after going missing earlier this week: Starred opposite Paul Rudd in 2011 movie Our Idiot Brother

Former child actor Matthew Mindler, best known for his role opposite Paul Rudd in the 2011 comedy Our Idiot Brother, has been declared dead after disappearing from his college in Pennsylvania last week.

The college he attended, Millersville University, confirmed his death after releasing a statement on Saturday.

‘It is with a grieving heart that I let you know of the death of 19-year-old Matthew Mindler from Hellertown, Pennsylvania, a first-year student at Millersville University,’ the statement obtained by TMZ read.

Matthew Mindler (left), a freshman at Millersville University and a former child actor who starred opposite Paul Rudd (right), vanished on Tuesday after walking out of his dormitory

‘A search had been underway for Matthew since Thursday, after he was reported missing. Matthew was found deceased this morning, Saturday, August 28, in Manor Township near campus.’

The cause of death has yet to be released as of Saturday afternoon, and authorities did not say whether or not foul play was involved.

According to the Millersville University police, Mindler, a 20-year-old freshman, was last seen on campus on Tuesday night after attending classes Monday and Tuesday. He was reported as missing the following night on Wednesday, after failing to return to his dormitory room and skipping classes.

Police wrote in an Instagram post that Mindler was spotted walking from the West Villages residence hall toward the Centennial Driver parking lot at around 8.11pm on Tuesday.

The Millersville University Police have released a screenshot from security footage, showing Mindler in a hallway in the West Villages residence hall on Tuesday night

As seen in a screenshot from security video, the student was wearing a white Millersville University hooded sweatshirt with black stripes on the arm, a black face mask, dark-colored jeans and sneakers. He was carrying a black backpack.

Mindler’s IMDB page lists eight acting credits in films and television shows, including in the 2013 short Frequency, which directed by his older brother, cinematographer Derek Mindler.

His biggest role to date was in Our Idiot Brother, which follows Rudd’s character, an idealistic farmer who upends the lives of his three sisters, played by Elizabeth Banks, Zooey Deschanel and Emily Mortimer.

Midler has not acted since 2016, when he appeared in the TV movie Chad: An American Boy.

‘Matt’s health and safety are paramount and I know our thoughts are with him, his family and friends,’ Wubah wrote in part. ‘Our police department is continuing efforts to locate Matt in conjunction with regional law enforcement agencies. They are following every lead and appreciate your attention to this effort.’