Home » Clap but don’t cheer: How will the Tokyo Olympics work? 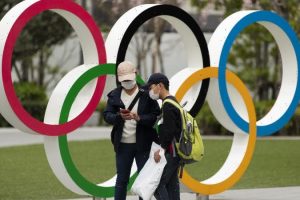 As a new coronavirus variant sweeps Japan, Olympics organisers are racing to make contingency plans, set spectator limits and prepare to isolate infected participants. Here’s what you need to know.

Clap but don’t cheer. No high-fives. Wear your mask at all times except when competing, training, eating or sleeping. Do not go to bars, restaurants and shops – it’s banned. And make sure you agree to the “compliance and sanctions” on page 32 or you can forget about taking your place on the blocks for your event.

The 11,000 athletes, coaches, international federations and media networks preparing for the most tightly controlled Olympics in modern history are about to be hit with a barrage of new restrictions as Japan attempts to host the largest sporting event in the world in the middle of a pandemic.

The timing could hardly be worse. Just when Japan thought it had broken through its third wave, a fourth wave appeared on the horizon. It is now adding 3000 cases a day, 1000 alone in Osaka, a daily record, where Governor Hirofumi Yoshimura has cancelled Olympic torch relay runs on public streets and is contemplating calling for a state of emergency.

In Tokyo, the Olympic organisers have their minds fixed on lighting the cauldron at the Olympic Stadium on July 23, although whether there will be spectators to see it live won’t be known until the last minute. They have judged it is too late to pin their hopes on a vaccine, so they are proceeding as if one does not exist. Delayed and dismissed in the face of an economic and health crisis, the Games of the XXXII Olympiad are ploughing ahead.

“If we prepare correctly, and if all the stakeholders and participants cooperate, I think we can minimise risk and enjoy the Olympics in a slightly different way than usual,” says Maki Kobayashi, an executive director of the Tokyo Organising Committee in an interview from the Japanese capital.

Kobayashi corrects herself. “I mean, quite a different way than usual.”

So how will the Tokyo Olympics work? What restrictions will athletes face? And will it be enough to stop another outbreak of COVID-19? 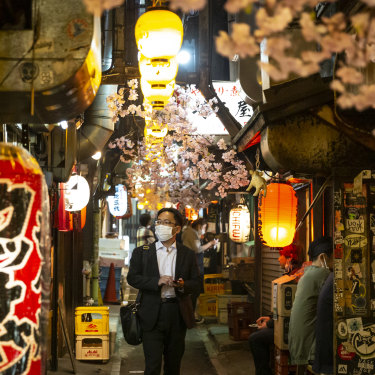 A man walks through the Shinjuku area of Tokyo as COVID cases surge in Japan. Credit:Getty Images

What does this mean for competitors?

For the thousands of athletes, federation officials, support staff and media travelling to Tokyo, the journey starts 14 days before they leave for Japan.

They will have to monitor and report health updates on an app for two weeks before they leave, take a COVID-19 test 72 hours before departure and narrow down their list of close contacts, including coaches and teammates. These are the only people with whom they are meant to interact while in Japan.

If they pass their COVID test before departure and on arrival, they will not have to quarantine. 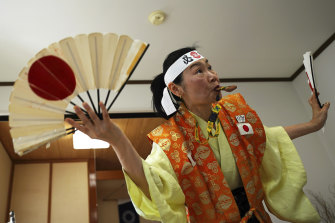 Olympic fan Kyoko Ishikawa, who has become somewhat famous in Japan as an unofficial Olympic cheerleader, will have to cheer from afar. Her headband says “Win!” Credit:AP

Anyone apart from the athletes, their immediate support staff and a restricted media contingent is barred from coming to Japan.

Athletes will also have to finalise a “planned activities” itinerary that is restricted to official Games venues and their accommodation.

“Avoid shouting, cheering and singing – find other ways to show support or celebrate during competition, such as clapping.

“During your stay in Japan, you will be expected to limit your activities to what is required in order to carry out your role.”

That means no after-parties in the Olympic Village and no late-night shenanigans. The lifetime of training that has for decades culminated in a heady mix of athletes blowing off steam after their events will have no place in Japan. In 2016, organisers ordered 450,000 condoms for Rio. Tokyo will only have 150,000 for those still bold enough to attempt to navigate the complexities of sex and social distancing.

For those thinking about flouting the regulations, the committee has this warning: “Repeated or serious failures to comply with these rules may result in the withdrawal of your accreditation and right to participate in the Olympic and Paralympic Games.” 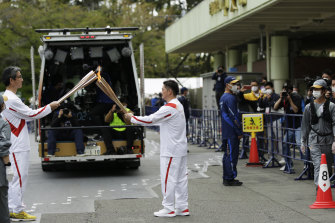 The first day of the Olympic torch relay north of Osaka on April 13, now moved off public streets.Credit:AP

What happens if there is a positive case?

Once the Games begin, athletes will be tested at least every four days. The rules will remain consistent across the Olympics and Paralympics, the latter start on August 24, with allowances made for medical conditions and extra precautions taken for comorbidities.

“If there is any suspicion of a potential case, information will go to the COVID liaison officer and to the Olympic Village infection disease operations centre,” says Kobayashi. “The relevant authorities will quickly track behaviour history and identify those who had close contacts and isolate those when necessary.”

Athletes in contact sports will be tested more regularly but the exact regulations are still being decided, with another update to the Olympics playbook due by the end of April and a final one in June.

Competitors across the 33 different Olympic sports are also facing the risk of being forced into isolation and missing their event if they are a close contact of a confirmed case. Organisers have left all options on the table, including cancelling heats or matches and withdrawing competitors if necessary. 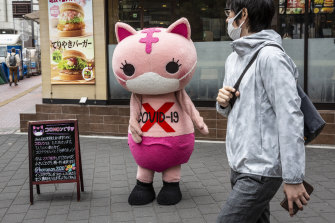 A costumed character reminds passersby in Tokyo of the dangers of COVID.Credit:Getty Images

The Australian Open, from which Olympics organisers sought advice, had 10 infections among the 1200 people who were forced to quarantine for 14 days on arrival. But these cases were contained largely to their hotel rooms, limiting the chance of community transmission.

There are 10 times as many athletes coming to Tokyo, plus their entourage, and no automatic quarantine requirements on arrival.

Authorities have booked 300 hotel rooms for athletes and support staff to isolate but only after they test positive and have mild or no symptoms. Those with symptoms will be taken to hospital clinics or government isolation facilities.

The Olympics Committee says patients will “be discharged from isolation in accordance with the discharge guidelines in Japan”. The Japanese Health Ministry currently has a 10-day quarantine period for COVID cases, meaning athletes who are diagnosed are unlikely to meet rescheduled events after discharge. The Olympics are scheduled to run for 16 days. 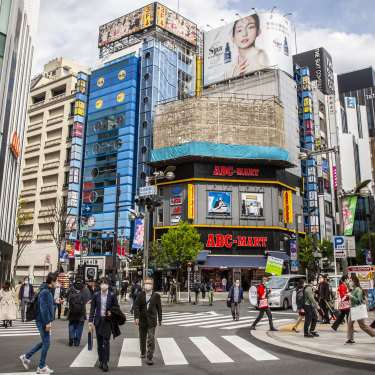 People wear masks in the Shinjuku area of Tokyo amid a surge in COVID cases.Credit:Getty Images

What have Australians said about the rules?

Australian Olympic Committee President John Coates said in February that the playbooks were sensible and “if there was ever a question of putting the safety of athletes at risk, then we wouldn’t do it.”

“They’ll be limited to just the Olympic Village, the transport from the village to their own venue, the Olympic Stadium for the opening ceremony, and that’s it — they won’t be going downtown and we’ll have social distancing in the village,” he said.

But Tennis Australia CEO Craig Tiley urged the International Olympic Committee to extend the timeline of the Games to allow athletes to quarantine and train in their own accommodation. “I’ve seen the playbook for the Olympics and I’ve looked at it carefully,” Tiley told Reuters in February “and compared to what we’ve done, we’ve had a far more rigorous program than is being proposed at the Olympics”.

“There’s no such thing as no risk,” he said. “But I cannot see it being done any other way, unless you are willing to accept a much higher risk of spreading the virus.”

What is the current COVID situation in Japan?

Bad and getting worse. Tokyo was placed under a month-long state of “quasi-emergency” on April 9. Bar and restaurant hours have been reduced as the country reached 500,000 total cases. It is still far below the tallies in the US, India, Brazil and Russia but four times as many as its neighbour China, where the coronavirus was first detected.

Osaka is now the centre of the latest virus outbreak in Japan. The country’s third-largest city is grappling with a highly contagious variant first recorded in Britain that is pushing the infection rate above 1000 cases a day.

“The mutant strain is spreading rapidly, and we are extremely concerned,” Japanese Economy Minister Yasutoshi Nishimura said on April 9.

Compounding the attempts to get on top of the virus is its slow local vaccine rollout. The country’s strict regulatory regime delayed the emergency approval of vaccines ticked off overseas until local clinical trials could be conducted. Pfizer remains the only vaccine officially approved. Japanese drugmaker Daiichi Sankyo Co has begun the first local production of a vaccine through AstraZeneca in anticipation of it being approved, but this remains vulnerable to ongoing concerns about very rare blood clots linked to the vaccine.

Kobayashi says when they begin, the already delayed 2020 Summer Olympics will allow the world to appreciate what many have been taking for granted.

“The games will remind all of us the importance of solidarity and cooperation. Because of the medical workers, the researchers, the essential workers and the citizens who have been bearing these situations, we can make things possible,” she says. “This is going to be the platform for hope.”