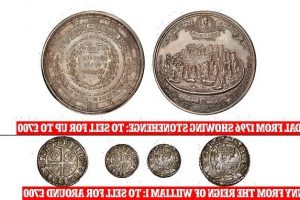 Collection of 650 coins, tokens, historical medals and paper money from Wiltshire is expected to sell for £20,000 at auction

A late numismatist’s coin collection is expected to fetch a whopping £20,000 at auction.

The collection centres on Wiltshire and includes a rare 1796 medal featuring Stonehenge and the ancient druids, which is set to sell for between £500 and £700.

Meanwhile a penny from the reign of William I that was minted in Salisbury is set to fetch a similar price.

Mr Ward, who died earlier this year, started collecting as a teenager in 1968.

His life-long collection will be sold on September 30 at auctioneers Dix Noonan Webb in 136 lots.

Very rare medal dating from 1796 showing Stonehenge and the ancient druids, set to fetch between £500 and £700 at auction

Peter Preston-Morley, head of the coin department at Dix Noonan Webb, said: ‘The Ward collection of Wiltshire 17th-century tokens, numbering 246 different varieties and 33 duplicates, is the second significant group of the county to be sold in these rooms in 2021.

‘It includes many pieces absent from the late Robert Thompson’s collection and is to be commended to those seeking to fill gaps in the county series.’

Also in the sale are coins collected by John Akins, including an extremely rare halfcrown for the Douglas Bank Co, Isle of Man.

Coins collected by Seattle-born Bill McKivor are also being sold and includes a rare 1792 trial copper halfpenny from Coalbrook Dale, Shropshire, that is tipped to fetch £1,500.

Also in his collection is a stunning proof halfpenny from 1797 depicting Gloucester & Berkeley Canal Co which could reach £800.