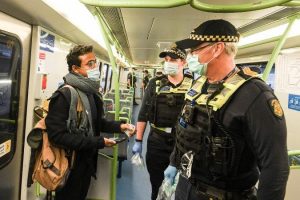 A sharp fall in the number of public health order breaches as Victoria moved on from pandemic restrictions has contributed to a significant reduction in the state’s crime rate.

For the year ending in March this year, Victoria recorded an 11.5 per cent drop in the number of criminal offences, the lowest figure since the same period in 2015. 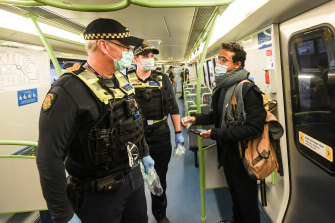 Crime rates have fallen, thanks in part to a decline in public health order breaches.Credit:Justin McManus

The number of reported victims of crime also fell by 6768 over the year, which Deputy Commissioner Rick Nugent said was the lowest figure since police introduced the LEAP database in 1993.

Family violence incidents decreased 2.4 per cent over the year to March, with 90,794 incidents reported across the state.

But non-family violence related assaults increased by 4.8 per cent, while serious assaults outside the home were up by 2.4 per cent over the year.

Nugent attributed the increased violence to a rise in the number of disputes between housemates and neighbours during lockdown, and a surge in attacks at licensed premises when they opened after the pandemic.

Residential burglaries, robberies, theft, drug offences and youth offending all fell during the 12-month period when orders from the Chief Health Officer kept many Victorians at home for several months.

Nugent conceded that a 72 per cent reduction in the number of public health order breaches had contributed to an overall reduction in crime rates.

He also urged caution on the continued fall in family violence, which remains a significant problem, particularly in vulnerable communities.

“While these reductions are positive, they must be treated with caution as we know that family violence is still under-reported in many areas across Victoria,” Nugent said.

“Family violence is, and will remain, a significant priority for Victoria Police”

While reports of family violence fell, the number of assaults outside the home increased.

Deception offences rose by 107 per cent over the year but, according to Nugent, that figure had been skewed by two alleged offenders charged with hundreds of counts of credit card and identity document theft.

In Brighton, where influencer Bec Judd claimed residents were living in fear, the number of crimes dropped by 829 offences compared with the previous 12-month period.

Across the whole Bayside local government area, crime dropped by more than 12 per cent over the year.

Crime Statistics Agency chief statistician Fiona Dowsley said the relaxation of public health orders had contributed to the downturn in crime across the state.

“[This has] resulted in fewer breaches of CHO direction offences, driving key crime measures down in the last 12 months,” she said.

“Decreases in acquisitive crime such as thefts and deception have also contributed to decreases in key crime measures, following trends seen throughout the pandemic period.”