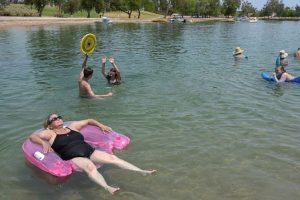 The heat wave pummeling the West won’t be leaving this week and could make wildfires even more dangerous to residents.

Dozens of record high temperatures were broken on Tuesday, including Denver at 101 degrees, Palm Springs at a scorching 120, and Palmdale, California, clocking in at 107.

The sweltering heat will not end any time soon.

By Thursday the temperature is forecast to reach 110 degrees in Sacramento. By Friday, the heat will climb to 118 degrees in Phoenix.

Red flag warnings and heat warnings have been issued from Montana to Southern California where the record heat, gusty winds near 50 mph and bone-dry conditions could easily spread wildfires.

Evacuations have been ordered in Montana as the 2,000-acre Robertson Draw Fire spreads near the Wyoming border. Firefighters expect the blaze to grow even more due to the hot, dry and windy conditions, according to the Montana Department of Natural Resources and Conservation.

Meanwhile, the Gulf Coast is preparing for the likely development of a tropical depression or tropical storm, which would be named Claudette.

From Houston to New Orleans, residents are expected to get heavy rain and gusty winds Friday into the weekend.

The worst conditions are forecast to come ashore Saturday morning.

Louisiana could see 1 foot of rain.