Demolition to begin at site of Florida building collapse 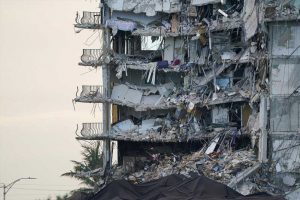 The remaining portion of a collapsed Florida condo building will be razed Sunday night between 10 p.m. and 3 a.m., officials said.

Miami-Dade Mayor Daniella Levine Cava said the unstable structure, which has hampered search and rescue efforts at the site of the deadly collapse, has to be demolished for work to continue on the site, where 24 have been confirmed dead and 121 remain missing.

“Bringing the building down in a controlled manner is critical to expanding our scope of search, as you know, in the pile, and allowing us to search in the area closest to the building,” Cava said at the briefing.

She said residents in the area have been cautioned to keep windows and doors closed to avoid having dust from the demolition enter their homes — and said “there may be noise.”

Cava also addressed concerns that some pets that may be left behind in that part of the building — and who have urged that the demolition be delayed until they are found.

“As an animal lover and pet owner myself my entire life I have made it a priority since day one to do absolutely everything possible to search for an animal that may still have been in the building,” she said.

“And in the days since the collapse, the Miami-Dade fire rescue team has conducted three full sweeps of the premise, including searching in closets, under beds, and all the other places that they could to seek an animal that may be in hiding,” she said.

The Champlain Towers South in Surfside collapsed shortly before 1:30 a.m. on June 24, burying nearly 150 people in the rubble.

Earlier Sunday, an Israeli colonel who is leading one of the rescue teams said he believed that there was a “close to zero” chance that survivors could still be found in the rubble.

“The circumstances that we saw at the last two days are too difficult for me to say professionally that I believe that there is a solid chance to find somebody alive,” Col. Golan Vach told WPLG-TV in an interview.

Hundreds of first responders, including the Israeli team, began sifting through the ruins after the collapse, with work stalled for 15 hours Thursday and again Saturday over concerns over the remaining structure.

The decision to bring down the rest of the building, initially expected to take weeks to complete, was hastened with the coming arrival of Elsa in the Sunshine State.

Controversy over the collapse has continued to intensify, with new reports of possible construction flaws and the recent revelation that the building’s manager chided Surfside officials just three days earlier about stalling on needed repairs.

The building went up in 1981 and was due for an upgrade for the required 40-year recertification, which was delayed for years following a 2018 engineer’s report that flagged major structural concerns near a pool area.

No cause for the collapse has been reported, but some experts believe the pool area, which sat above an underground parking garage, was the epicenter of the tragedy.