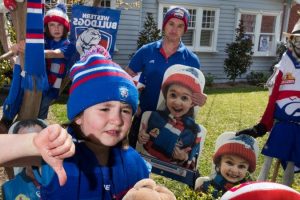 In the fortnight leading up to the grand final, diehard Bulldogs fan Mat Lyons never stopped believing his team could overcome the highly fancied Demons.

Although that faith was not rewarded with a premiership on Saturday night, the Elsternwick secondary school English teacher still has high hopes for the Bulldogs in the coming season.

“We will be back stronger than ever in 2022,” he said. “Beware the vengeful Bulldog.” 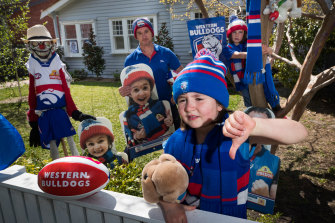 By half-time he was “shaking like a leaf”, his nerves jangled after a slow first quarter followed by an explosive second term as the Dogs finished in front at half-time.

But just minutes into the final quarter it was clear the game was beyond the Bulldogs’ reach and he had already accepted they were beaten by the better team.

Mr Lyons was part of the campaign to save the Bulldogs from merging with Fitzroy and he said during that time just surviving and being competitive against other clubs was considered an achievement.

“I grew up in the ’80s when we were rattling tins to stop the clubs from folding or merging.” 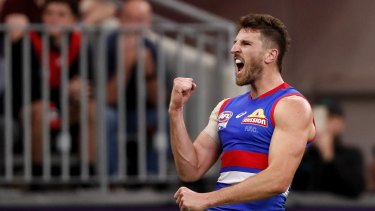 Marcus Bontempelli of the Bulldogs celebrates a goal during the 2021 Toyota AFL Grand Final match between the Melbourne Demons and the Western Bulldogs at Optus Stadium on September 25, 2021 in Perth, Australia. Credit:AFL Photos

He said coach Bulldogs Luke Beveridge had completely changed the club’s culture, instilling a competitive and winning spirit that would hold it in good stead in coming years.

Mr Lyons insisted the Bulldogs had the right players to bring them success in the future.

“I think we’ve got the right blend of players in their mid-20s who haven’t reached their peak yet,” he said.

His daughters Holly Marland-Lyons, 8, and Ruby Marland-Lyons, 7, share his love for the club. The family planned a Bulldogs-themed day on Saturday, starting with blue, white and red pancakes. 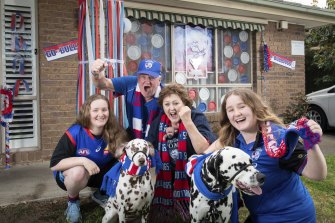 Fellow fan Mikayla Royal usually runs out in the Melbourne colours when she plays for the Bentleigh Demons, but the Bulldogs are in her blood.

Both her parents Keith and Christine were already Footscray supporters before they met.

Ms Royal was nervous and excited in the fortnight before the grand final as she hoped her team could pull off an unlikely victory. Yet she still took pride in what her team had achieved despite falling short of a premiership.

“We’re proud of what we’ve accomplished especially in the past two years with COVID,” she said.

She will hold onto the memories of watching the 2016 grand final victory at the MCG and considers it one of the best days of her life.

Ms Royal agreed with Mr Lyons that the Bulldogs had the potential to win another premiership soon.

“I think we are pretty well set up to keep pushing for a flag in the next five or six years – maybe even longer if we can retain our younger players.” 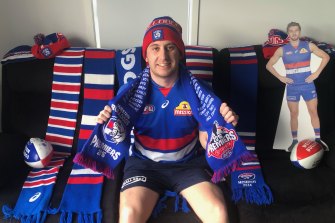 In Werribee, Sam Twaddle, one of the Bulldogs cheer squad leaders, chose the team as a child and got his first membership when he was 12 years old.

Mr Twaddle said he was devastated to lose the grand final, but he was happy for Melbourne supporters who got to enjoy breaking a decades-long premiership drought – just as Dogs fans did in 2016.

But above all, he is most looking forward to watching his beloved Bulldogs play in person.

“Next year hopefully footy being back to normal, we’ll be able to go to games and let the boys know we’re there for them,” he said.