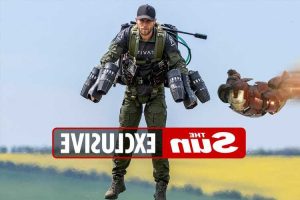 A MAN with two jets on each hand and a roaring engine on his back hovers 4ft above the ground.

Suddenly, arms pointed down, he darts through the air and across the field with astonishing ease. 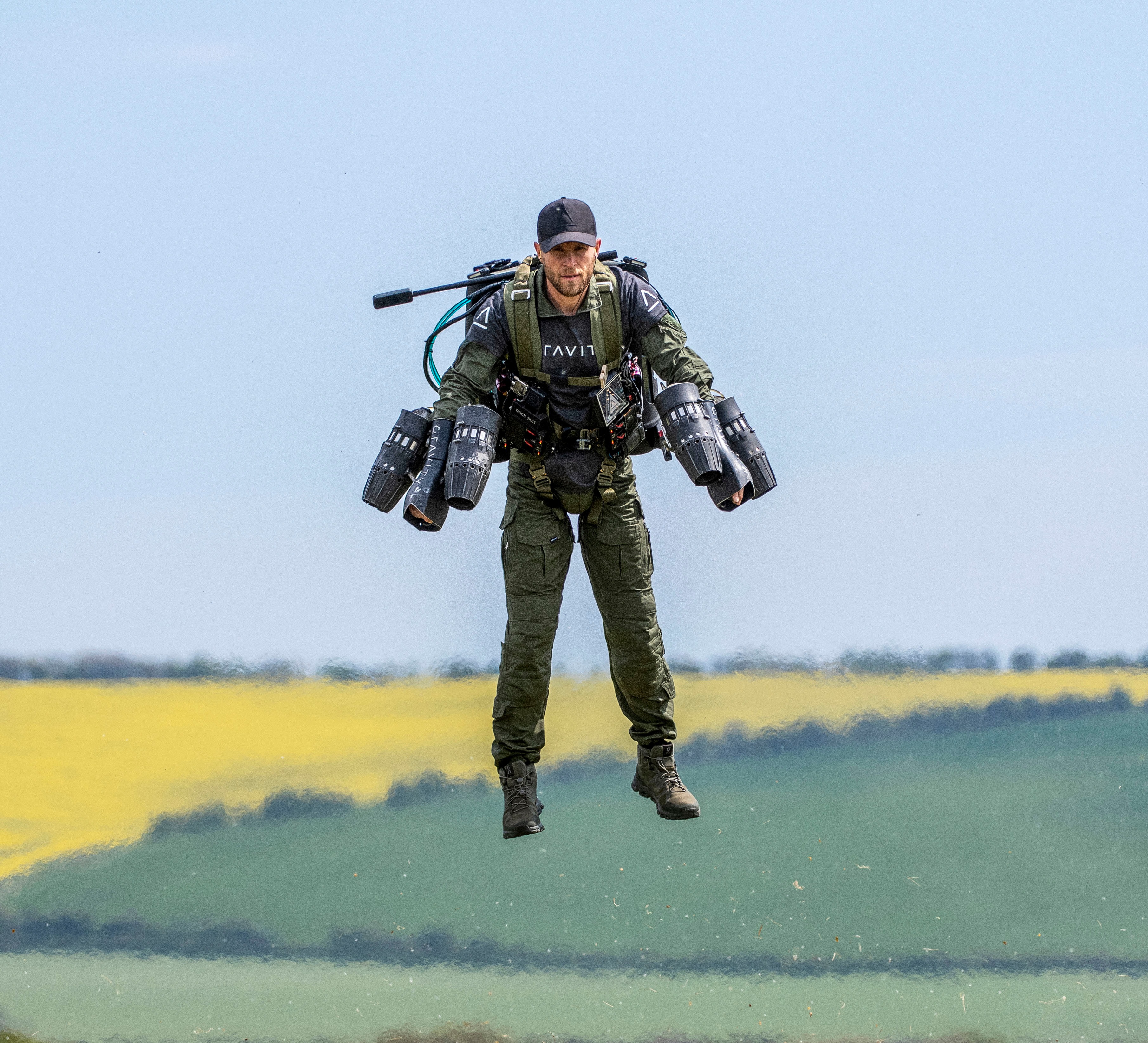 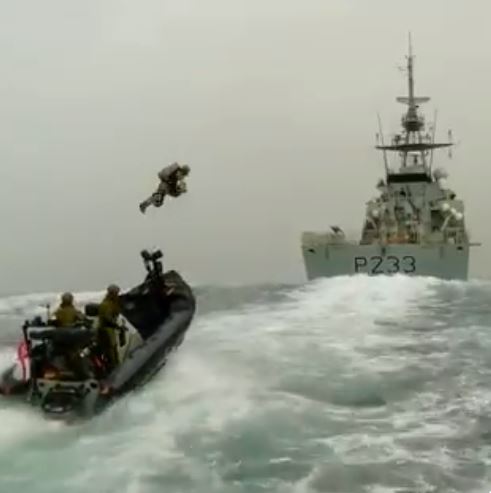 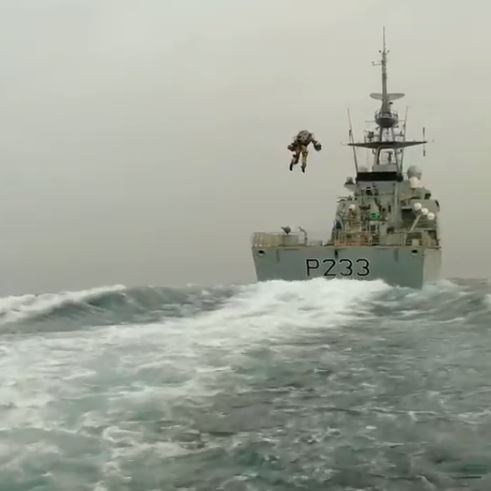 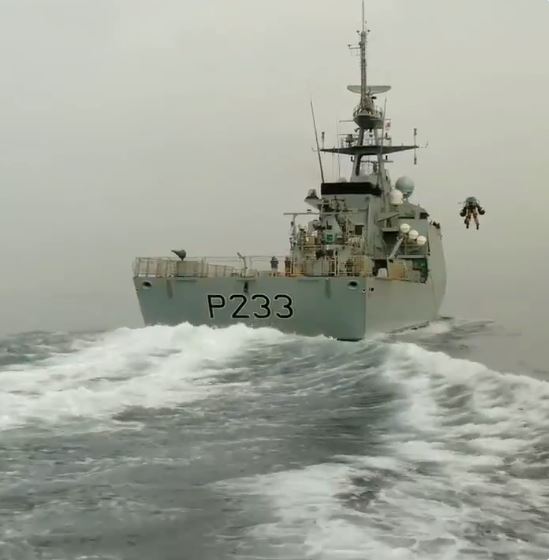 This is Richard Browning, real-life Iron Man, founder of Gravity Industries and inventor of the world’s first jet-powered flying suit.

With 1,000 horsepower — more than a Formula One racing car — this astounding creation has the potential to reach 100mph and soar to thousands of feet.

Four years since his first lift-off in a Wiltshire farmyard, Richard’s ­discovery is now at the forefront of military innovation, as well as starring on the wish lists of millionaires and dreamers alike.

It makes the exploits of Marvel’s big-screen superhero Iron Man seem real. But for the former oil trader and Royal Marines reserve, creating a flying suit was simply a chance to turn the impossible into a reality.

Richard, 42, says: “There is this innate passion that everybody seems to have about looking at the birds and thinking, ‘Wouldn’t it be cool to do that?’ So one of the main aims of this was to try to create something that would allow a human to fly in the most raw, intimate and minimalist way.”

Richard’s life has had a dramatic transformation in the past four years. In 2016 he was an oil trader for BP, working in London but flying around the world on business.

At weekends he would tackle ultra-marathons, then spend time with his wife Debbie and their sons Oliver and Thomas at home in Salisbury, Wilts.

Frequent flyer Richard says: “I have quite a busy mind and I find when you’re stuck somewhere on a plane, you can’t go anywhere and you can let your brain relax.

“It was in that quiet environment that I used to just sketch and come up with crazy ideas.”

It was on one such trip that Richard thought of building a flying suit, based around the human mind and body as a balancing system, adding just the right amount of technology to lift a person off the ground.

Telling only his family and a few friends of his plans, he began his research. He soon discovered he could buy powerful mini jet engines for a few thousand pounds and ordered one through the post. 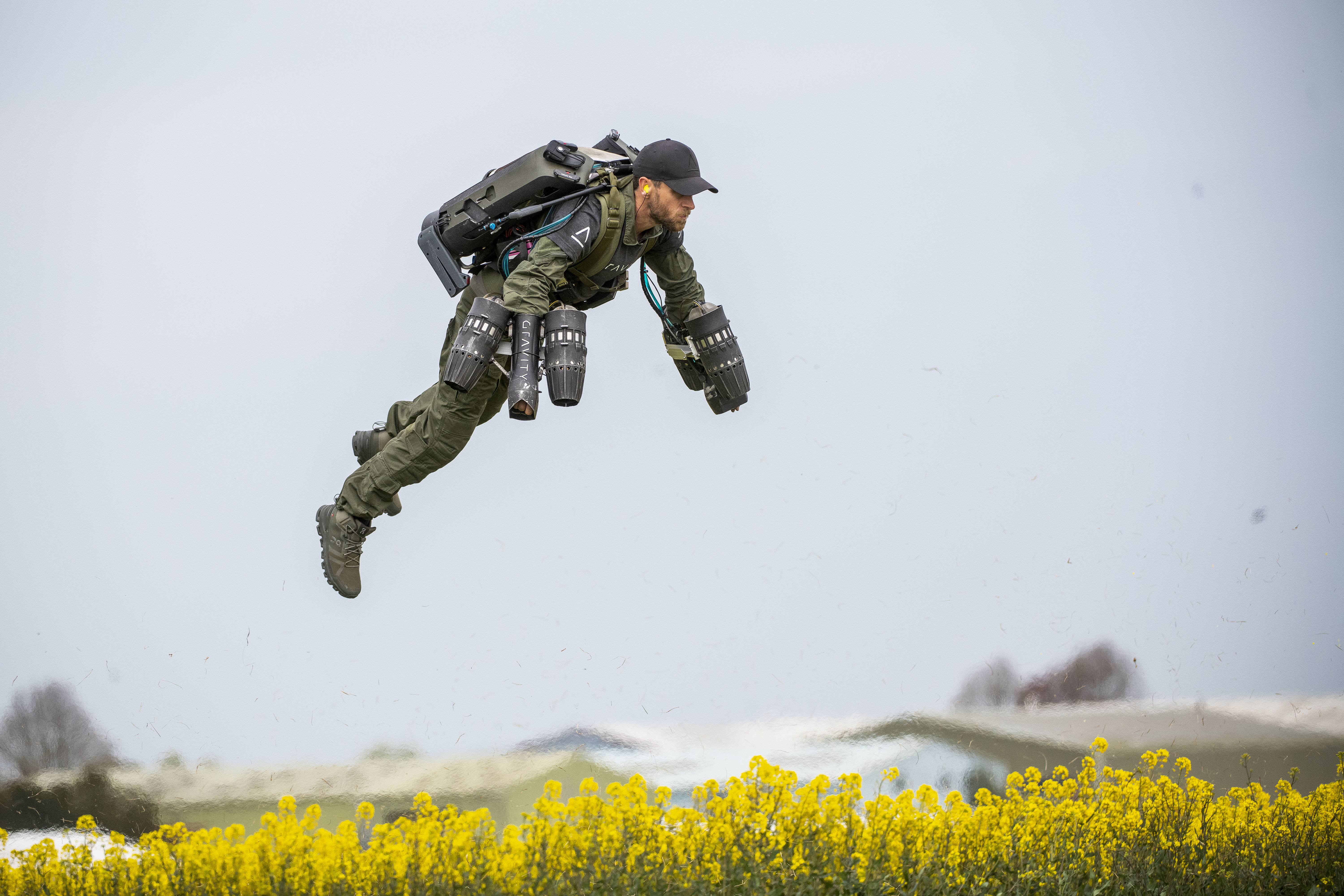 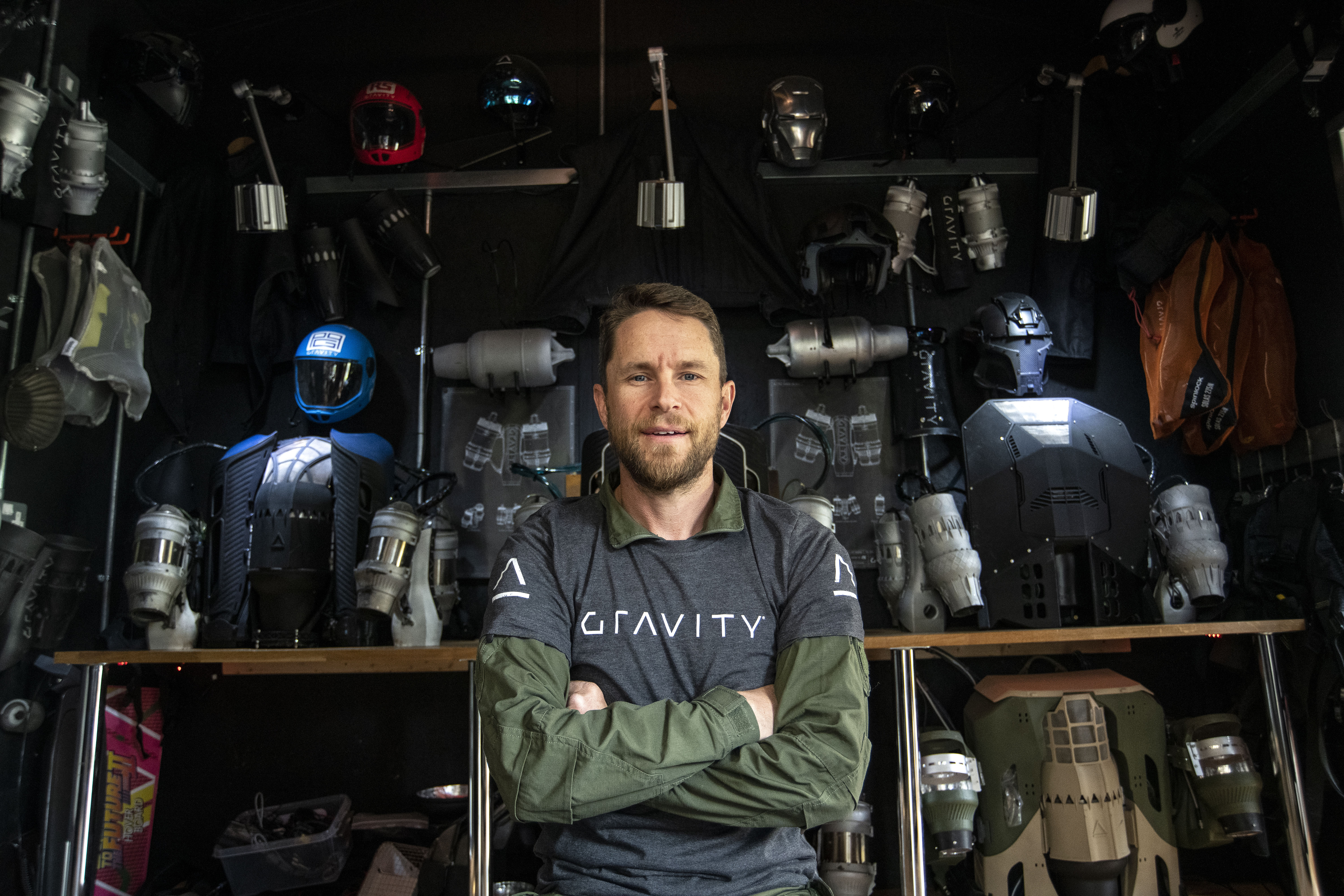 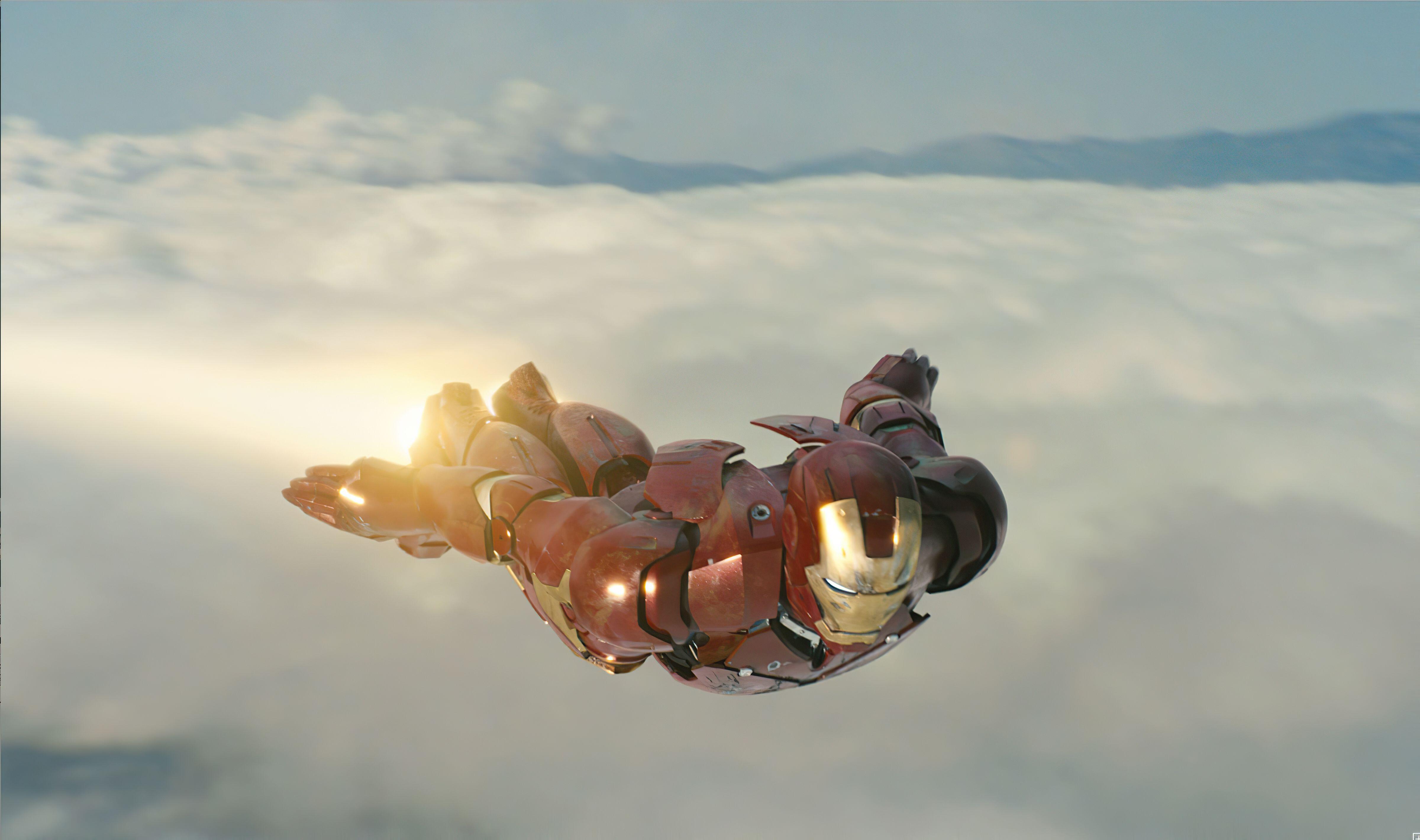 Finding one jet engine ­produced an extraordinary amount of thrust when pointing downwards, Richard bought another, then two more, and attached them to his arms to see if he could get lift-off.

Using a Tupperware box to contain the ­electrics, a baby carrier to inspire the harness, and a broken drill trigger to control the jets’ speed, he worked late into the night on his invention, after his demanding day job. For eight months he tweaked the suit, heading out most weekends to a local farmer’s yard to test his changes.

Then, after countless failures and multiple falls, it worked. In October 2016, for six seconds, his jet suit lifted him off the ground and forward through the air. From that moment, Richard, who refuses to reveal the cost of developing his suit, knew it could work.

He says: “When you fly the suit, you’re not thinking about balancing or steering, you simply think about where you want to go, and you go. It’s quite a euphoric freedom.”

By early 2017, Richard was ready to share his suit with the world. With a bit of outside investment, he launched Gravity Industries.

He has since demonstrated the suit at 115 events in 33 countries, covering everything from Top Gear to Ted Talks in front of Tesla founder Elon Musk and Amazon boss Jeff Bezos. One jet suit packs into two standard suitcases, making it easy to transport.

Richard’s invention has taken him everywhere, from opening the Japanese basketball season on live TV to flying in the Arizona mountains.

He has now reached speeds of 85mph in the suit and there are even plans for an electric version.

But it is Gravity’s collaborations with militaries around the world that is really making waves.

Marines often use stealth to board suspect ships at sea, and in a test last week, the Royal Marines used jet suits to board a military vessel at sea. Footage of the exercise shows Richard and two other pilots flying across the water and landing on patrol ship HMS Tamar.

Later, First Admiral Tony Radakin, head of the Royal Navy, shared the clip on Twitter and hailed the suits as “game-changing”.

And while the Marines have said the suits are not yet ready for ­military adoption, they said the invention shows “significant promise”. As Richard’s journey has progressed, a more personal influence has become apparent to the inventor.

Sitting in front of family photos, Richard talks about his dad Michael, a “maverick inventor and designer” who ended his life when Richard was 15. Michael’s passion for creating prompted him to leave his job as an aeronautical engineer to work full-time on his inventions for ­folding bikes and bike suspension.

Richard says: “I grew up around his infectious desire to take an idea that’s seemingly impossible and growing it. A lot of the skills that helped me to prototype the jet suit came from my childhood of playing around with his workshop. 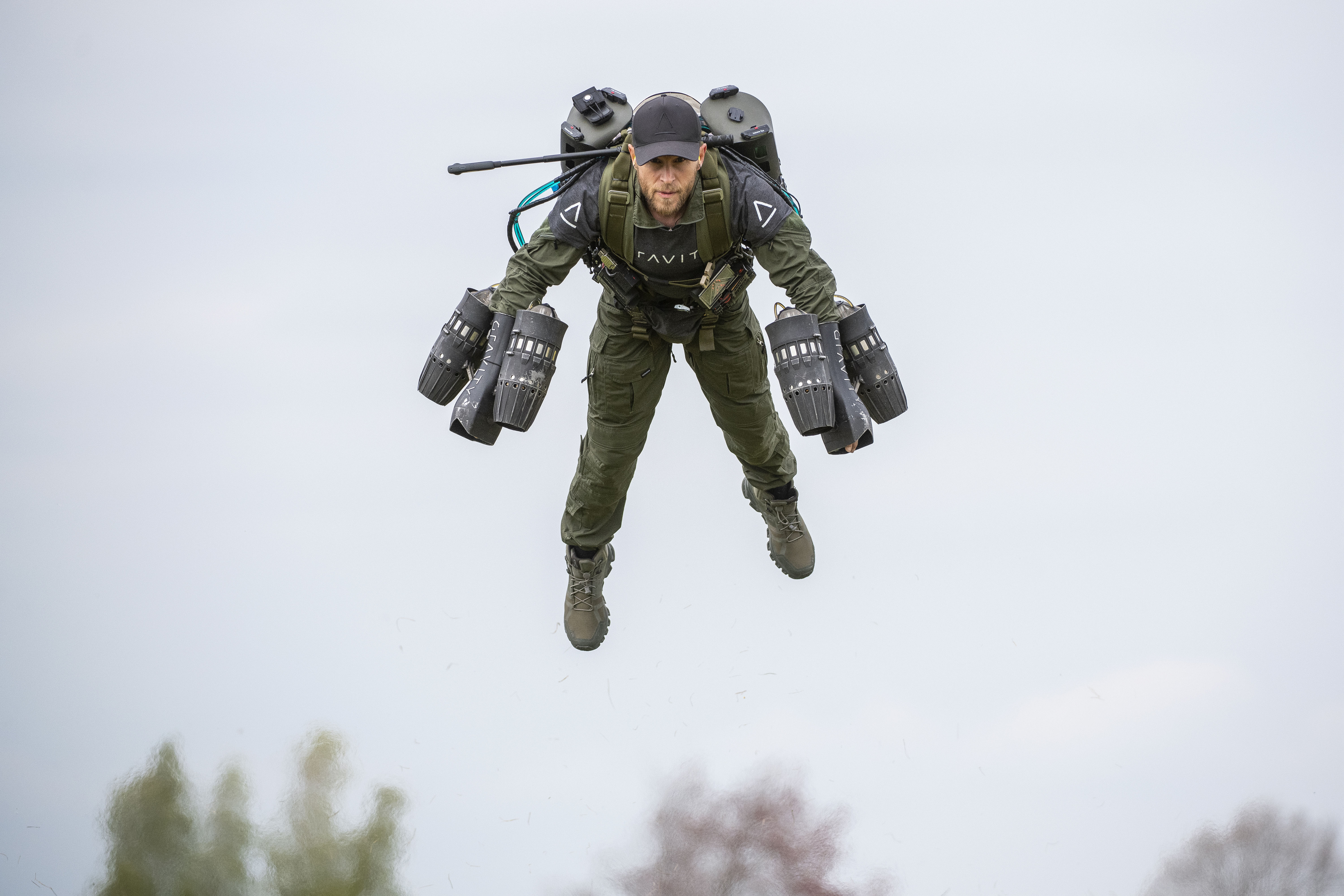 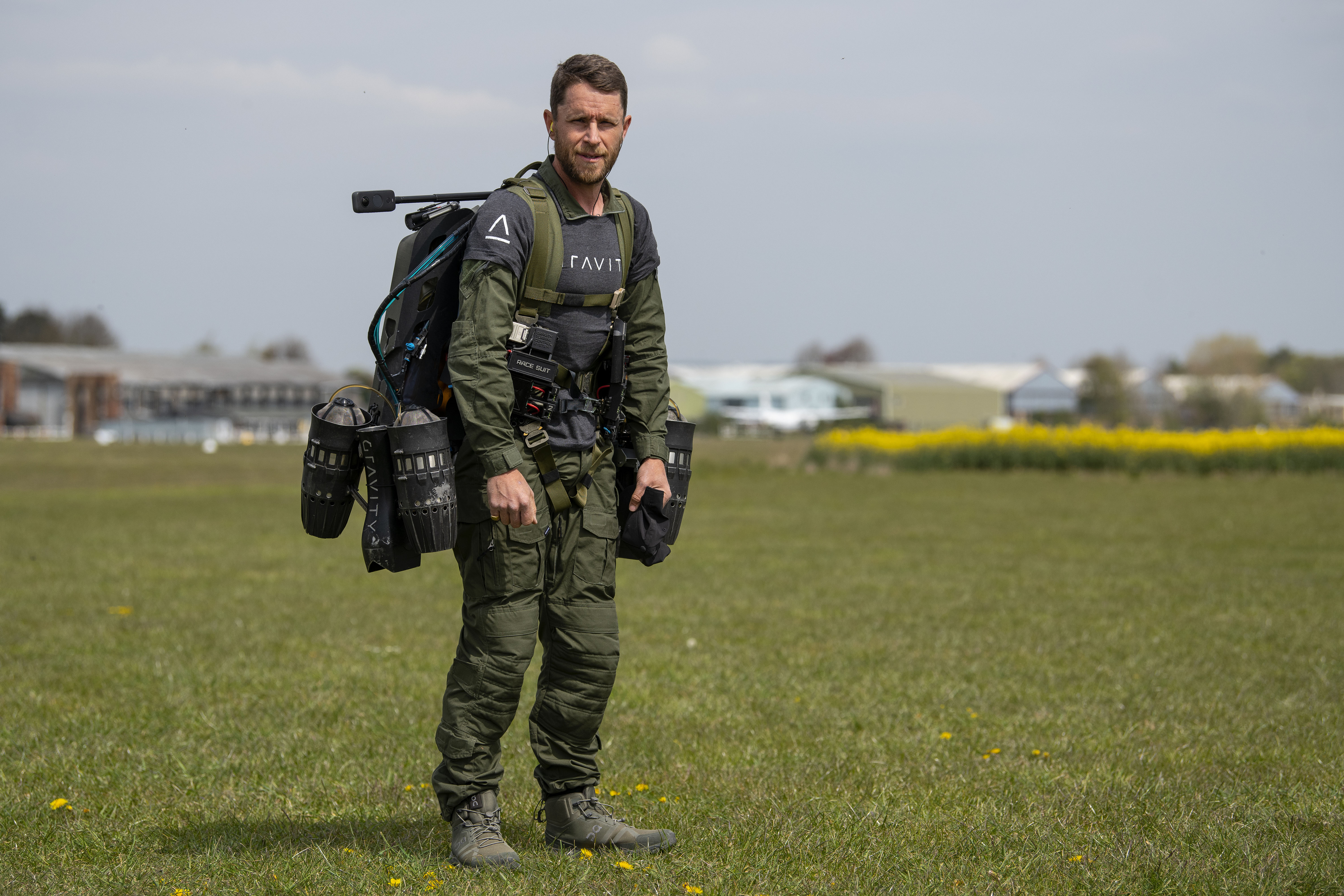 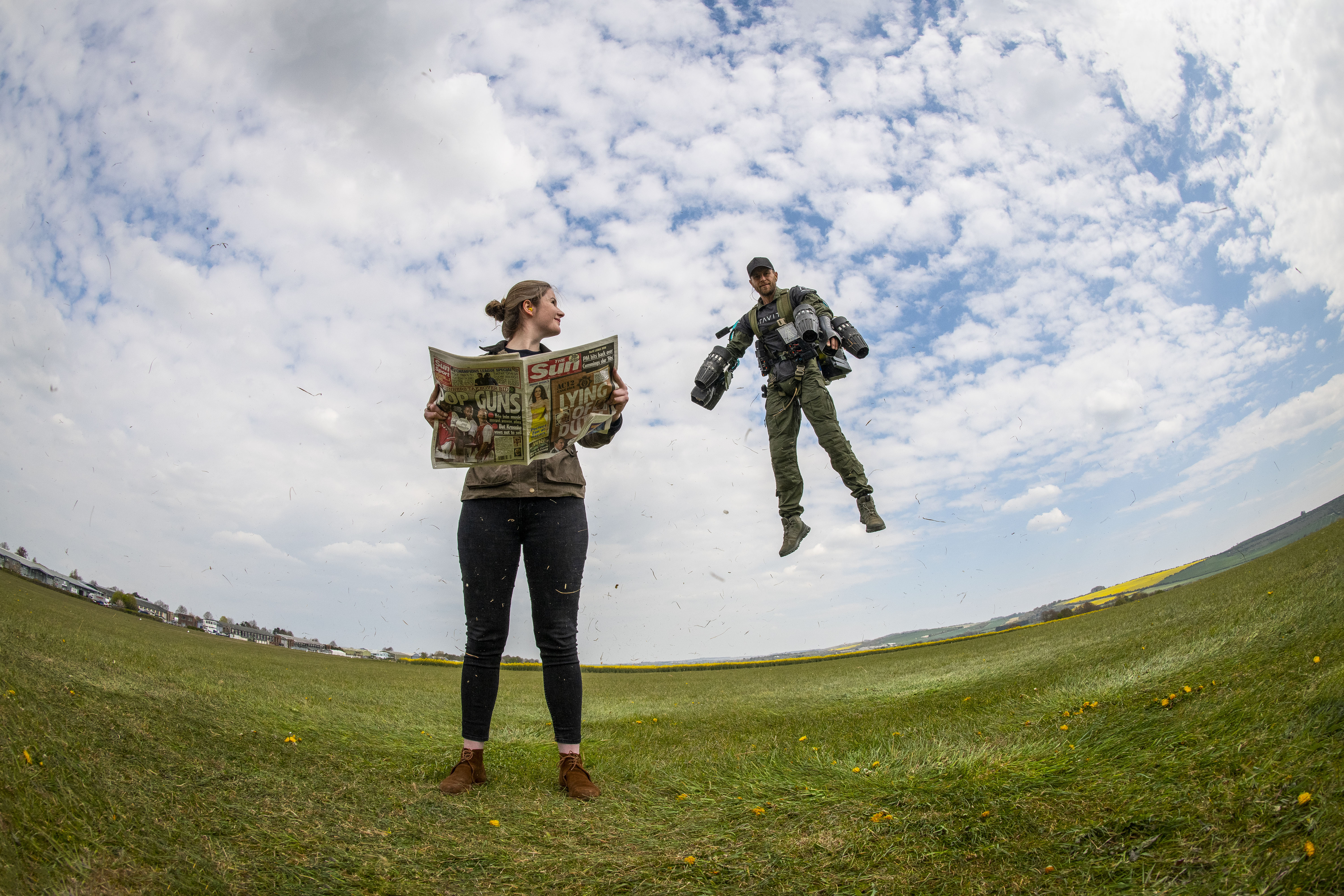 “I’m confident he’d have absolutely loved this. In some ways it’s a bit of a tribute to him, I think.” As lockdown eases, Richard aims to restart the company’s jet suit training ­sessions for members of the public, at £2,000 to £6,000 a time, and there are plans for televised jet suit racing.

Richard says: “In terms of the future of gravity, I’m really proud of where we’ve got to in only four years. We’ve got a huge amount of work going on with search and rescue and the military. Our research and development journey never slows down. If anything, we’re growing rather than going away.”

l Taking On Gravity by Richard Browning (£20, Bantam Press) is out now. Find out more at gravity.co or on social media @gravityindustries and @takeongravity.