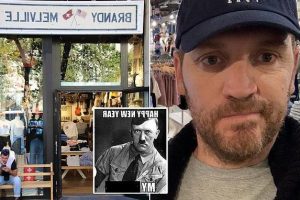 The CEO of teen fashion empire Brandy Melville, Stephan Marsan, demanded full body photos of store staff and fired anyone who didn’t match his ideal of blond, skinny and white, according to claims by current and former staff.

‘If she was black, if she was fat… he didn’t want them in the store,’ former senior vice president of Brandy Melville Luca Rotondo told the Business Insider.

Staff claimed Marsan and other top executives had a group chat where they would share racist and sexist memes, including one that featured Hitler, and fostered a toxic work culture that exploited young women and was openly racist and discriminatory.

One former employee even claimed that a store manager sexually assaulted her, Insider reported.

Rotondo told Insider that in his nine years at the company he was instructed by Marsan to fire hundred of staff members, particularly if he felt that a certain store had too many black employees.

Rotondo provided Insider with a grab of a September 2019 text which included a picture of a dark haired manager in Newport Beach and Marsan responded that he was ‘only hiring pieces of sh*t,’ and that they were ‘going to destroy the store,’ finally demanding ‘kick her out’ in his native Italian. 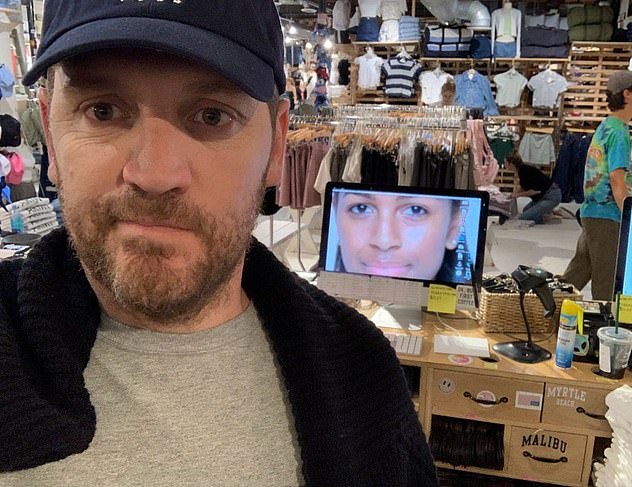 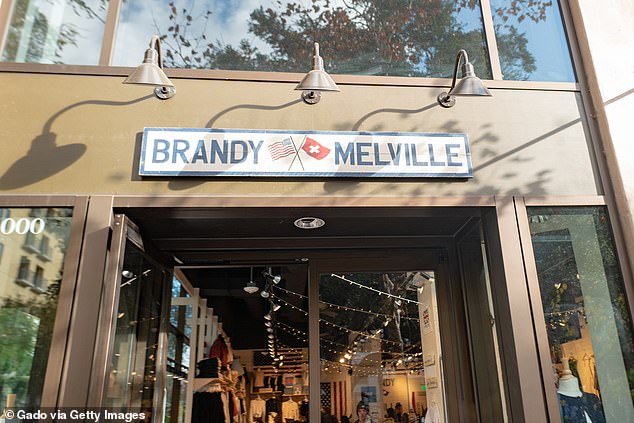 The European clothing and accessory brand was launched in the U.S. in 2009 and was founded in the 1990s by Italian retailer Silvio Marsan 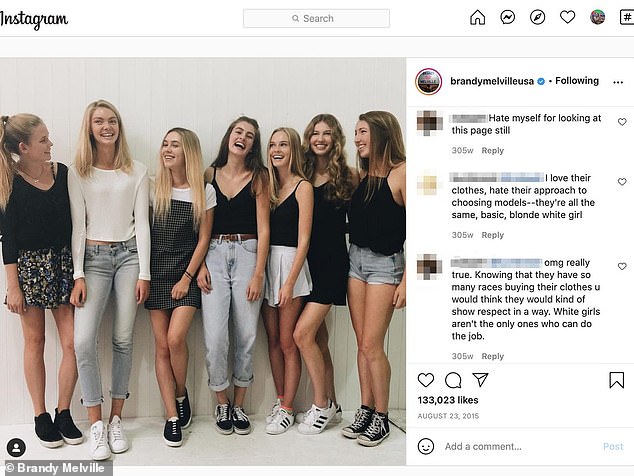 Brandy Melville’s U.S Instagram page has drawn criti from followers who have questioned the lack of diversity among the brand’s models 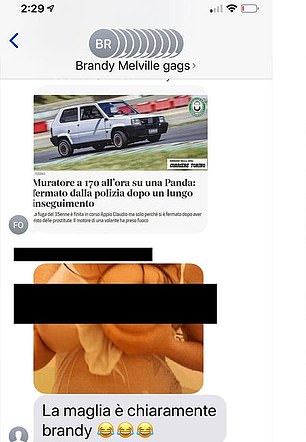 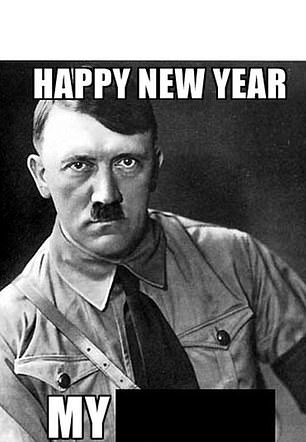 Rotondo and former Canadian store owners claim in two separate lawsuits that they were fired from their positions for refusing to let got of fat or black employees.

In his lawsuit, Rotondo says that when he didn’t go through with firing the ‘piece of sh*t’ Newport Beach manager, per his text, his salary was cut by $40,000 to $260,000 before being let go three months later.

The European clothing and accessory brand, a favorite of supermodels Bella Hadid and Kendall Jenner, launched in the U.S. in 2009 and was founded in the 1990s by Italian retailer Silvio Marsan. 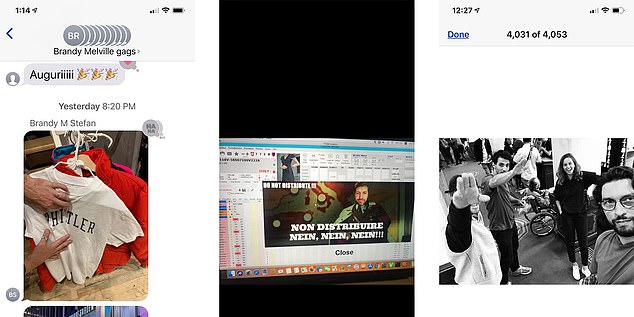 The chat also featured a selfie of top employees doing a Nazi salute, (far right) Marsan himself sent a picture to the chat where he folded a shirt so that the letters features spelled out ‘Hitler’ (far left) and a poorly edited image of Marsan’s head photoshopped onto Hitler’s body Sorgi tells Insider Marsan made himself (center) 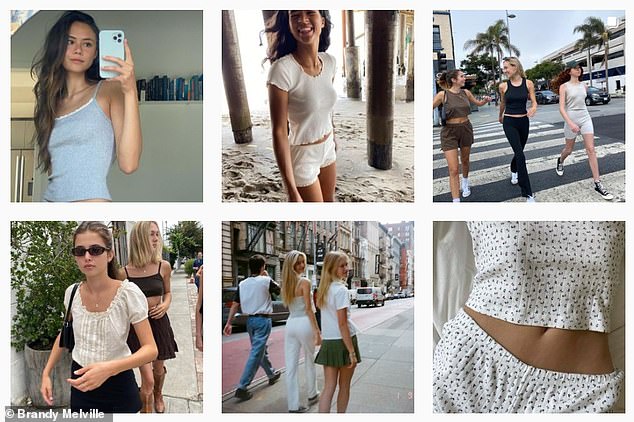 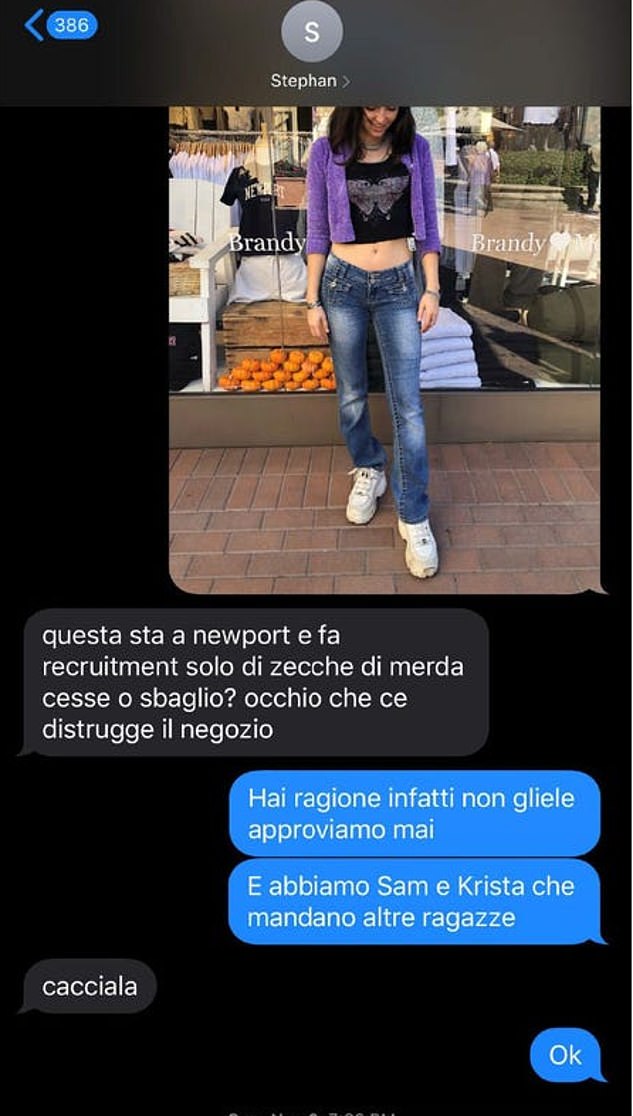 Since making its way to the states, the store became a staple for teens and rivaled established retailers like American Eagle and Urban Outfitters.

The clothing store is probably most famous for it’s controversial sizing model known as ‘one size fits most’ which only goes up to a UK size 6.

The brand is most popular on Instagram, where it has amassed nearly four million followers, and features models known as ‘Brandy girls’ that fit the stereotypical California girl aesthetic of blonde, thin and white.

The clothing store has nearly 100 store locations worldwide and surpassed an annual global revenue of $250 million as of 2019.

Franco Sorgi told Insider that when he helped Marsan open his first stores in Canada in 2012 the CEO made his racist business stance clear from the start, telling him he did not want black people to wear Brandy Melville because it would damage the brand’s image to have black or overweight women wearing his ‘nice and delicate’ garments but instead the clothing store should appeal to ‘good-looking rich little girls.’

This racist mentality applied to employees as well.

Store managers and employees would scout future staff if they fit the Brandy Melville aesthetic, with a a focus on a very specific demographic.

There was no sugar coating it,’ a former New York regional manager told Insider. ‘It was ”She is skinny, white, blond, and pretty — let’s hire her.”

Before a candidate was hired for a retail position multiple executives would be sent photos of the prospective hire and the candidates pay was determined solely by her photo or even a screenshot of her Instagram- the more they fit the Brandy Melville ‘look’ the higher the pay, eight former employees told Insider.

Former employees at the retailer’s New York stores told Insider that black employees would be relegated less desirable post like the stockroom or night shifts and management would hire only hire black employees for ‘prime hours’ out of desperation due to staff shortages but then fire them as soon as white candidates became available. 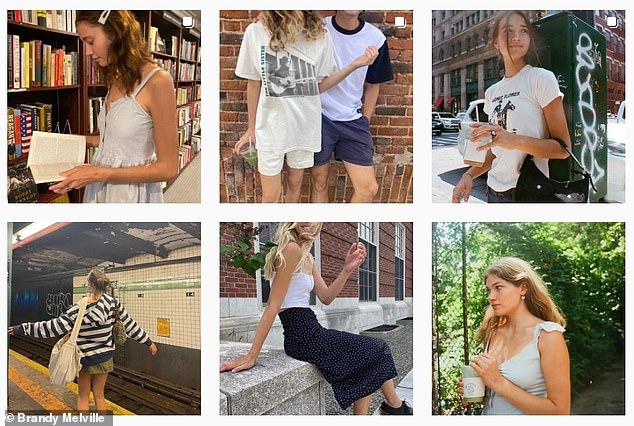 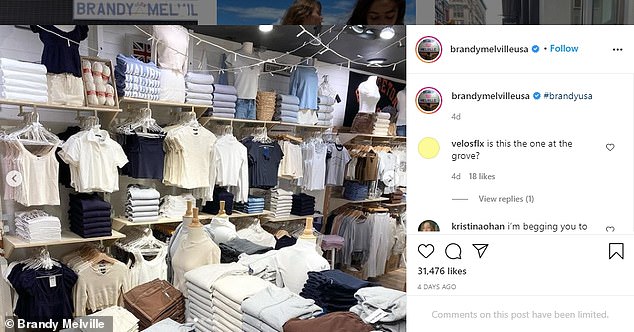 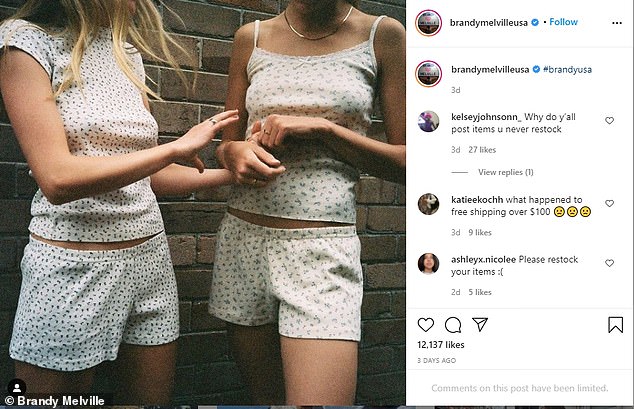 The brand features models known as ‘Brandy girls’ that fit the stereotypical California girl aesthetic of blonde, thin and white

A former regional manager in New York recalled blowing up at Marsan and his right-hand man, Jessy Longo, telling them they couldn’t keep firing all the people of color.

‘Even if they were the best employees ever, they would only keep the ones that were pretty or mixed’ race,’ she told Insider.

Stephenie Legros, a former black employee recalled being fired from the New York flagship store in 2017, around the same time Marsan was spending more time at the location.

She told Insider she was fired on her day off and told by HR it was due to lack of funds, but noted that days prior to being let go the store hired two new employees- one white and another Asian-and that she was told by the new white hire she was earning $13 and hour, $2 more that her.

‘I felt like they were trying to get rid of some of the Black girls because that’s not Brandy’s look,’ Legros said.

Sorgi says he rebelled against Marsan’s racist hiring policy, instead hiring employees on merit and when three top executives flew to Canada to visit his stores in April 2017 they immediately expressed how unhappy they were with how his staff looked and demanded the store closed.

Sorgi said as he understood it, the problem was ‘there’s only Indians here, there’s only dark people,’ and Yvan Marsan, Stephan’s brother, told him the clientele were ‘ghetto.’

Sorgi said he also complained about a manager from another location that she deemed too ‘short and fat’ to work at Brandy Melville, according to Sorgi’s lawsuit against the retailer.

Following the visit he was pressured to close stores that were not in predominately white areas.

In August 2020, after Sorgi claims he and his business partner, Paolo Simeone, were told by Yvan that YYGM was terminating their trademark agreements at the behest of Bastiat USA, the pair filed a suit against Bastiat USA, alleging their agreements were terminated because they refused to discriminate based on race or appearance.

Insider also obtained screen grabs of a group chat called ‘Brandy Melville gags’ which included 30 of the company’s top male exec’s, including Marsan, his brother Yvan, and CFO Rianna where they exchanged pornography, images of Hitler and racist memes with the N-word over the course of 2017- 2020.

The holocaust and Nazi’s were a popular topic of conversation among the Brandy Melville execs, according to Insider from the 150 screenshots they obtained, Hitler was mentioned 24 times.

The chat also featured a selfie of top employees doing a Nazi salute, Marsan himself sent a picture to the chat where he folded a shirt so that the letters features spelled out ‘Hitler’ and a poorly edited image of Marsan’s head photoshopped onto Hitler’s body Sorgi tells Insider Marsan made himself.

The chat also reveled in mocking black people and featured multiple memes that included the N-word and even an image of someone holding up a National Geographic magazine with an ape inches away from a black man, implying a resemblance.

Sorgi told Insider that group chat members went along with the jokes to appease Marsan even if they did not find the jokes funny.

‘Everybody will laugh at the most stupid joke he made, even if they were not funny,’ he said. ‘Everybody would kiss his ass like you can’t even imagine. I wouldn’t be surprised if people … in the chat would post nasty stuff just to make him happy.’

Additionally, former employees told Insider they were encouraged to go on extreme diets in order to keep their jobs and were encouraged by managers to take Adderall in order to have the energy to work long hours but that the clout of working for the ‘cool’ company and the perks that came with it, made it worth it.

Favorites, dubbed ‘special snowflakes’, would even get access to company credit cards for shopping sprees, invited to work trips to Hawaii or Italy, and had access to the ‘Brandy apartment’ in New York City’s exclusive SoHo neighborhood, Insider reported.

‘We call it a sorority … so many horrible things are happening, but at the time it was the coolest thing to be a part of,’ a former New York employee told Insider. ‘Like, I would go back to school and be like, ‘Yeah, I work at Brandy.’ And they’re like, ‘Oh my God, you work at Brandy?!”

Former employees claimed that employees as young as fourteen would undress in front of execs as they tried on new clothing items and that there was a belief among retail workers that going fully topless during the process would lead to higher pay.

‘Even though it was sus, everybody wanted’ to be one of the favorites,’ a former employee told Insider. ‘You’d hear about it and be like, how do you get those privileges?’

In 2012, 17-year-old Mina Marlena said she was encouraged to change in front of Marsan and Longo in just her thong and went along with it in order to not lose her job.

‘I always felt like I had to do what they were asking or I would lose my position,’ she told Insider.

Marsan and Longo allegedly brought beer to a new York  store to share with a 16-year-old employee and sent bottles of wine to a San Francisco store whose staff was mostly underage to drink during an overnight shift.

The unprofessional behavior crossed over into alleged sexual assault according to a former 21-year-old New York store manager,.

She told Insider when she asked to stay in the Brandy Apartment for a night in July 2015, Andrea Castagnasso, owner of multiple Brandy Melville stores in Italy, showed her the room she would be staying in and mentioned he’d be sleeping in the room next to hers despite the impression the apartment was only used by store employees and models.

She says the two went out for drinks in Brooklyn and then she has no memory of what happened next, just waking up in his bed the next morning.

Insider reviewed medical records from the time that include a note from a doctor that wrote that the manager said her boss ‘raped her’ and that she did not proceed with pressing charges in order to not lose her working visa.