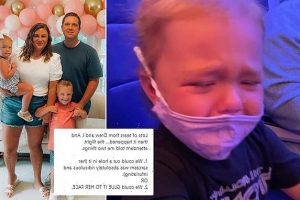 A mom has blasted a Southwest Airlines flight attendant who she says told her to glue her two-year-old daughter’s mask to her face when the child refused to wear it on a flight from Florida to Virginia.

Ali Cleek, was traveling from Orlando to Norfolk, Virginia, last week when her daughter, Drew, started crying and refused to keep on her mask.

The mom of two says Drew wanted to suck her thumb, which is the girl’s way of self-soothing.

Cleek claims the flight attendant gave the family two choices: cut a hole in the mask or glue it to Drew’s face.

‘I don’t like being this person. Wearing a mask is the federal mandate… I get it. I respect it. But at some point we have to have human decency. Compassion.’ 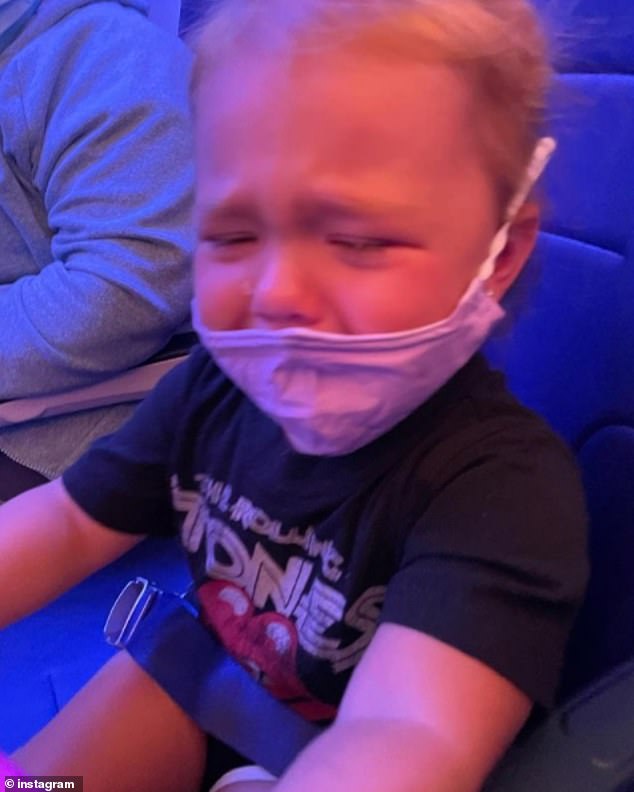 Ali Cleek spoke out on social media after she claims a flight attendant told her to glue her two-year-old daughter’s mask to her face. Her daughter, Drew (pictured), was crying on the family’s Southwest flight and refused to keep on her mask because she wanted to suck her thumb

In an interview Monday with Fox News, Cleek described herself as a ‘rule follower’ and said she does not want to come across as an anti-masker, but also notes the incident had her in tears.

Cleek shared that she and her husband were actively trying to calm Drew down and get her to wear the mask as two flight attendants stood over them.

‘The flight attendant told me two things. 1. We could cut a hole in it (her sarcasm was absolutely ridiculous and infuriating) OR 2. We could GLUE IT TO HER FACE,’ she wrote.

Cleek said the family was ‘doing everything [they] could to comply’.

‘Drew is a thumb sucker and her only way she biologically knows how to soothe herself is by sucking her thumb which is damn near impossible with a mask,’ Cleek’s post reads.

She furthered her explanation, telling the news outlet: ‘I just know that regardless if it was sarcasm or not I was embarrassed and trying to follow the mandate as much as I could.’ 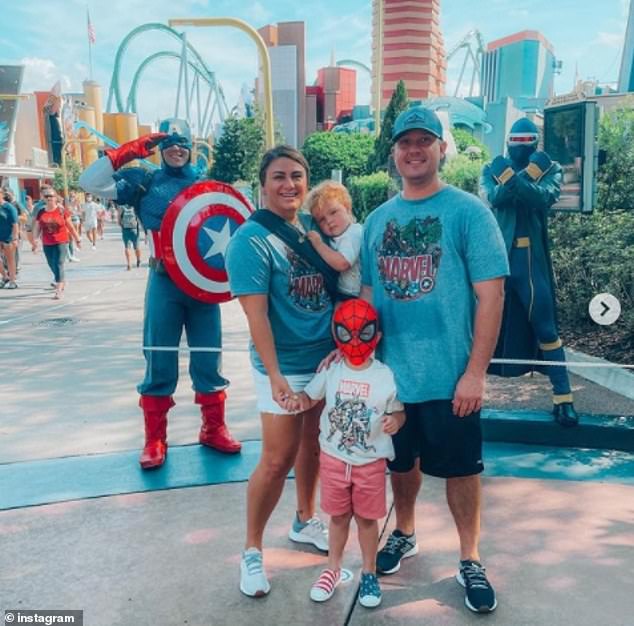 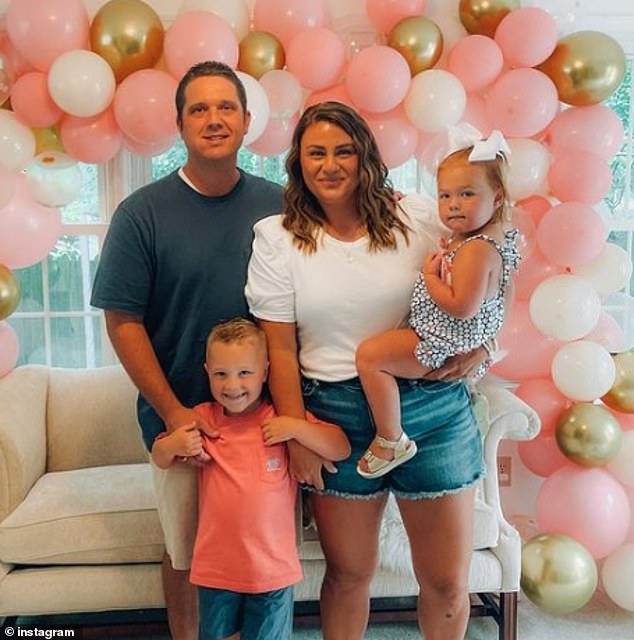 Cleek (pictured with her family at a birthday party in July) said the flight attendant gave the family two choices: cut a hole in the mask or glue it to Drew’s face

Cleek says that since the incident an airline customer service representative contacted her to apologize.

‘They said they would essentially talk to the flight crew,’ she said.

The mother hopes Southwest will communicate with all employees to prevent a situation like this from happening again.

‘I know I never want another parent to be in tears on an airplane because their 2-year-old won’t wear a mask. I really don’t want parents to feel like they have to hold down their child to put on a mask. I also don’t want to feel like I can’t travel with my kids by plane,’ she said.

When contacted by DailyMail.com, Cleek declined to comment further.

Meanwhile, in a statement obtained by Fox, Southwest failed to acknowledge the incident and reiterated that the federal mask mandate for travelers has been in effect since February and ‘requires all passengers over the age of two to wear a mask at all times throughout the travel journey’.

‘We [Southwest] appreciate the ongoing cooperation among our customers as we work, collectively, to follow the federal mandate and support the comfort and wellbeing of all who travel with us during the ongoing COVID-19 pandemic,’ the statement reads. 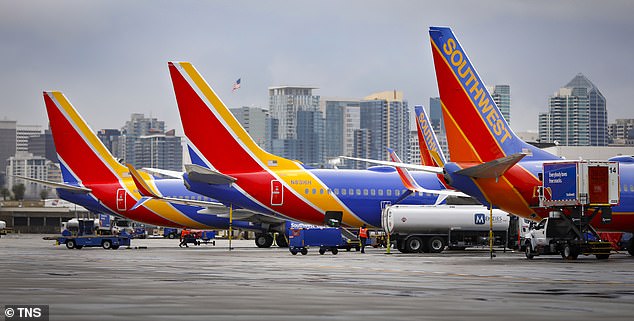 In a statement obtained by Fox, Southwest failed to acknowledge the incident and reiterated that the federal mask mandate for travelers has been in effect since February and ‘requires all passengers over the age of two to wear a mask at all times throughout the travel journey’

‘As a note, customers are reminded of the federal mask mandate multiple times prior to travel. Southwest provides reminders during the booking process on our website; in pre-trip emails sent to customers prior to departure; and as a part of a customer’s Health Declaration Form that must be acknowledged during the check-in process on the Southwest app, Southwest.com, Southwest’s mobile website, and airport kiosks.’

This is not the first time Southwest has made headlines for incidents involving face coverings on children.

In May, the air carrier refused to let an Iowa family on their connecting flight home because their 5-year-old son, who has autism, couldn’t wear his face mask.

Cody and Paige Petek’s young son, who is nonverbal and has autism and a sensory processing disorder, was struggling to wear his mask and was kicked off their plane from St. Louis to Des Moines.

Several passengers reportedly fought to keep the boy and his family on board, but Southwest Airlines still turned them away, claiming they were following federal laws.

However, TSA policy states that people with disabilities who cannot wear a mask because of the disability are exempt from the mandate. Cody and Paige Petek’s young son, who is nonverbal and has autism and a sensory processing disorder, was struggling to wear his mask before the family boarded their Southwest plane from St. Louis to Des Moines last May

Southwest Airlines booted another family off their plane in early April because their two-year-old couldn’t keep his facemask on.

Erik Harvey posted an 18-minute video to Facebook on April 1 titled ‘Kicked off the plane *’not an April fools joke’ where he shared his traveling experience.

In the video, which has garnered over 1,000 views, he said he was ‘fired up’ as he told the story of his family getting kicked off a Southwest flight from Denver, Colorado to Austin, Texas, where they intended to visit family.

The family of three had boarded the plane when two-year-old Jackson ripped off his face mask and was ‘done’ and would not put it back on.

It was then a flight attendant approached the family and said the child had to put it on or the family would have to get off the plane.

Harvey said he and his wife, Michelle, were ‘flustered’ trying to get their son to put the mask on but he would not cooperate. The flight attendant told them they had to deboard the plane.

However, the Harvey family’s situation saw a better ending than most. After Harvey’s video talking about the experience went viral, pilot James Peck flew his twin-engine airplane to Denver, picked up the family, and flew them to Austin at no charge.

The pilot also offered to fly the family back to Denver at the end of their trip. 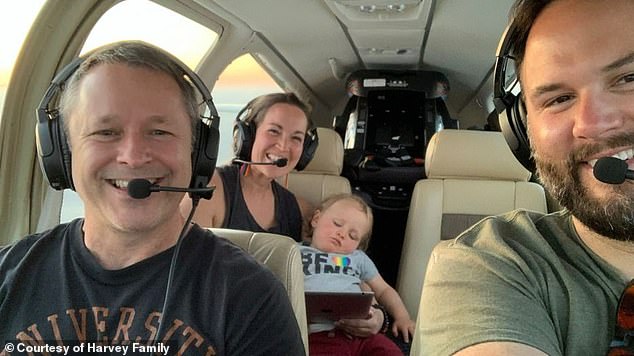 After venting on Facebook about being kicked off a Southwest Airlines commercial flight, Erick Harvey’s friend, pilot James Peck, flew the family to Austin, Texas 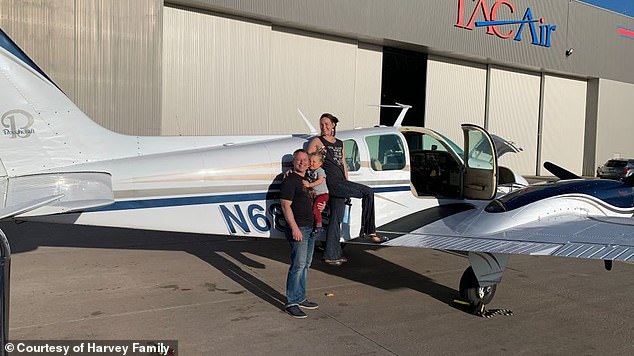 Erik Harvey with his wife Michelle and two-year-old son Jackson. The family flew on a private plane after being kicked off a Southwest Airlines commercial flight to Austin, texas 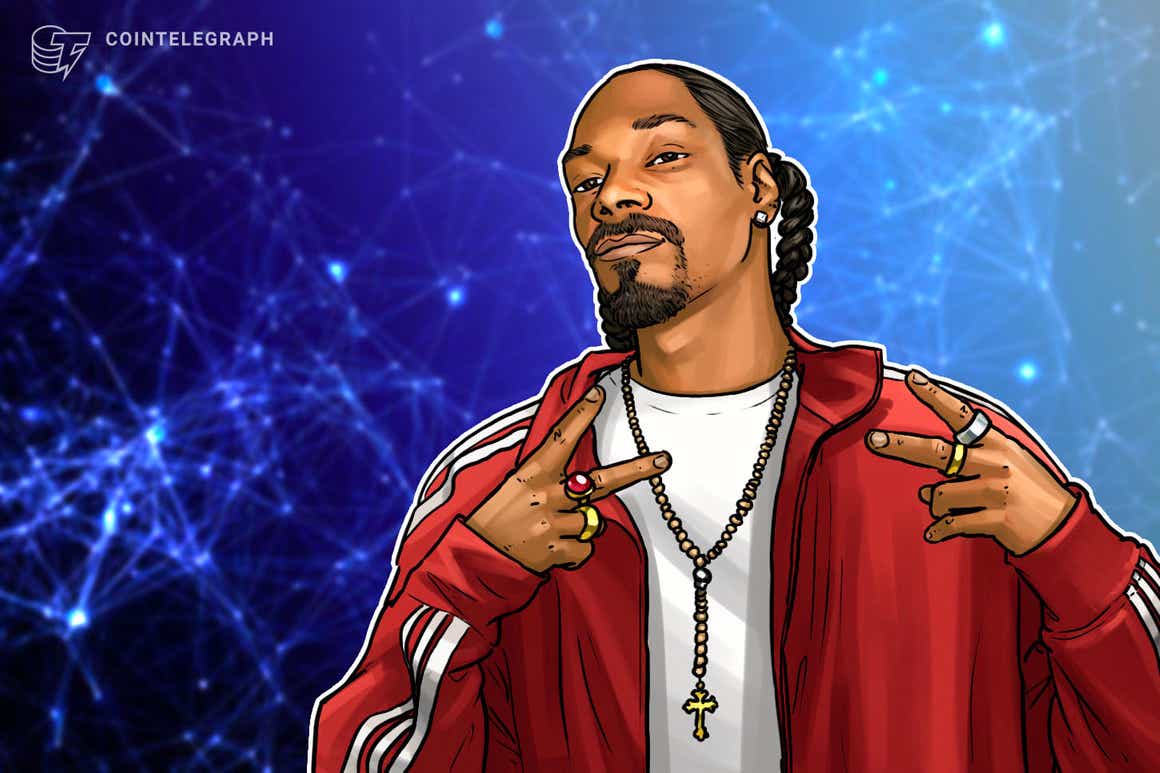