Gunman on scooter opens fire on crowd on Bronx street, wounding one 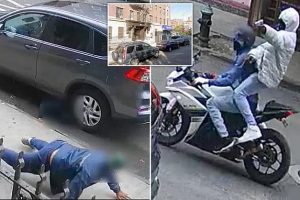 Police are searching for the scooter-riding gunman who opened fire on a group of people in the Bronx, leaving one person wounded.

Surveillance footage showed four men sitting near a stoop on Wales Ave. near E. 152nd St. in Woodstock in the Bronx, New York City, at around 7pm on Thursday when two men on a scooter rode by.

The one riding in the back of the scooter, suddenly stood up, pulled out a gun and began shooting.

The group quickly scattered, with two dropping to the floor and one man even rolling under the car.

A 28-year-old male, whose name was not released, was shot once in the left leg and was rushed to Jacobi Hospital. He has been treated and since released, The Daily News reported.

An NYPD police spokesperson told DailyMail.com ‘they are looking at all avenues on why shooting occurred.’

‘It is unclear at this time if it was gang related or a targeted shooting,’ the police spokesperson said. ‘It is under investigation.’

On Saturday, police released the surveillance footage and are seeking the public’s help in locating the shooter. A reward of up to $3,500 is being offered. 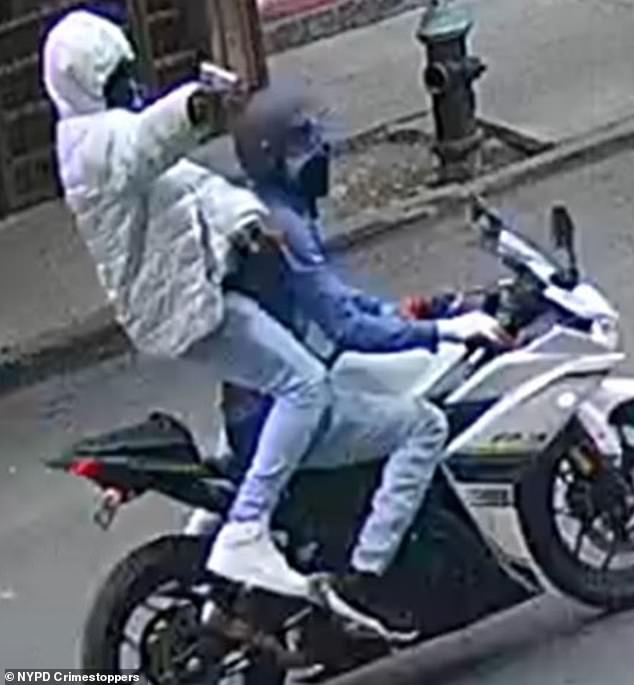 Wanted for an Assault in front of 644 Wales Avenue in the Bronx. Two individuals riding on one motorized vehicle approached a 28-year-old male. One of the individuals displayed a firearm and discharged at the victim multiple times, striking him in the left leg. A reward up to $3,500 is being offered 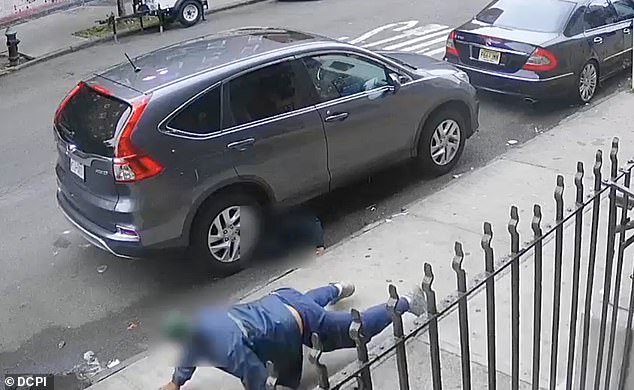 The shooter was dressed in blue jeans, white sneakers and a white puffy jacket. He had his hood over his head as he stood up on the back of the motorbike and aimed his gun directly at the crowd.

The driver of the scooter was wearing jeans, black sneakers, a black helmet worn over a blue-hooded jacket. Both suspects appeared to be wearing some type of face covering.

One man is scene crawling down the stoop on his stomach, while another is scene hiding underneath a car before the scooter disappears, the news outlet reported.

Officials said no arrests have been made.

The NYPD is asking anyone with information to contact NYPD Crime Stoppers at (800) 577-TIPS. All calls will be kept confidential. 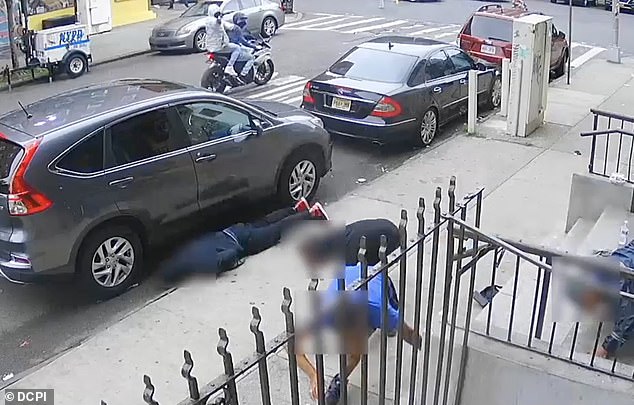 The gunman on scooter is seen aiming at the group of men as they all scatter. One male is seen squeezing his body underneath a grey truck 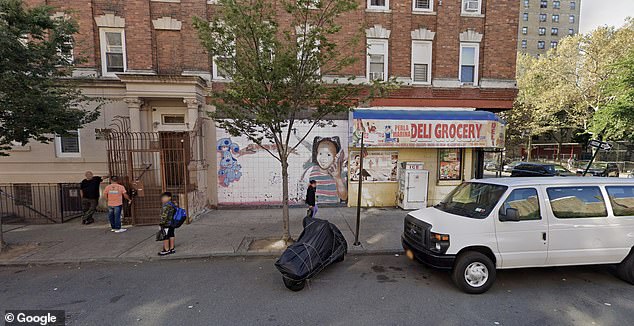 A view of the street where the random shooting took place that injured one 28-year-old male who sustained a gunshot to the leg. The victim was rushed to hospital and has since been treated and released