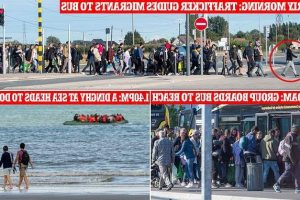 This way to the promised land: SUE REID sees a human trafficker brazenly leading a 70-strong line of Iraqis and Iranians to catch a bus to the beach in Dunkirk… Hours later they were sailing to Britain. How WILL our new Home Secretary end this crisis?

Breakfast time in Dunkirk, and a human trafficker in a black top brazenly marches a large crowd of migrants along a street busy with French shoppers buying their baguettes.

Displaying all the confidence of an official tourist guide, he leads his throng to a local bus stop. There the 70 or so Iraqis and Iranians — some with little children on their shoulders — join him on board for the hour-long road-trip to the beach where a black rubber boat waits to take them illegally to England.

This was the scene on Wednesday morning at the French port, even though plenty of gendarmes were on patrol to stop this latest addition to the flow of illegal migrants crossing the Channel from France.

What we witnessed shows that the migrant crisis on the north French coast is now out of control. Numbers reaching Britain have topped 31,000 this year, and historic Dunkirk — the scene of an iconic evacuation of more than 300,000 British and French troops during the war — is in the grip of traffickers who conduct their multi-million-pound people trade with impunity and no fear of the authorities.

We watched the trafficker and his paying customers over four hours that day, first spotting the group walking fast along a road leading from the migrants’ tented camp a few miles outside Dunkirk.

We saw them reach the bus stop at a shopping mall on the town’s fringes. They waited there for a few minutes before boarding the C2 bus at 9.40am and travelling the four miles to Fort des Dunes in the nearby seaside town of Leffrinckoucke.

The bus was so full of migrants, with all seats and standing room taken, that the French people hoping to board in Dunkirk and at stops en route had to wait for the next bus to come along.

When I talked to the bus driver, a young Frenchman with a hipster beard, to ask whether he thought his passengers were really migrants, he told me clearly: ‘Clandestins allant en Angleterre’ (‘Illegals going to England’). Rolling his eyes wearily, he warned me not to get on, but to wait for the next bus on the same route 15 minutes later, with fewer passengers.

An hour later, after tracking his C2 bus out of Dunkirk, we observed the trafficker’s group get off at a stop in a narrow street in Fort des Dunes called Rue de 2 Juin 1940, named to commemorate France’s own military deaths in Leffrinckoucke during the Dunkirk evacuation.

The migrants emerged from the vehicle, still being led by the trafficker who guided them over the road carefully via a zebra crossing. They headed for a tiny footbridge spanning an inter-city railway line, which drops down into a housing estate in Leffrinckoucke. With the trafficker still in front, the migrants briskly passed terrace houses with Gallic names such as one celebrating the novelist Emile Zola. 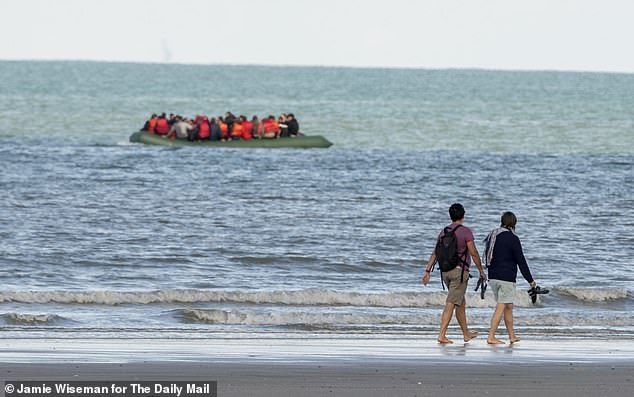 Migrants on a boat leave France for the close to the beach at Fort Des Dunes.

A quarter of an hour later, they had reached the wooden gate of a nature park full of trees, a favourite of local dog walkers and hikers, called Dune Dewulf.

Myriad tracks lead through the park to the town’s mile-long beach from where, on a clear day, you can see the white cliffs of Dover.

It was as the group went through the gate that we last saw the trafficker in his black top.

The migrants, however, left the park three hours later, running onto the sands to the blow-up dinghy which they knew would be there because people-smuggling gangs had pinned the location on their mobile phones.

They inflated the boat and by 1.40pm at least 50 of the migrants could be spotted on board in red life jackets as they headed towards England amid French sailing boats and windsurfers. Maritime tracking stations, monitored that day by the Mail, show that no French naval rescue vessels stopped them on their way.

This group is believed to have reached England’s South Coast on one of 15 boats which brought 667 migrants into the UK from the beaches of northern France on Wednesday.

If the journey we tracked was a one-off, it would be worrying enough. But later that day the Mail saw another group of 40 migrant customers, also led by their smuggler guide, travelling by bus from Dunkirk to Fort des Dunes.

This group got off the bus at the final stop, a terminus next to the beach, before walking past tourists eating ice creams into woods with high dunes overlooking the sea before they, too, disappeared.

The area is a traffickers’ paradise. It is dotted with brick fortifications, built in the 19th century to protect France from invasion, but still bearing the battle scars of the 1940 evacuation. These fortifications are now used to hide migrants. High above the beach, they are also perfect look-out posts where traffickers can spot police who scout the seashore in four-wheel-drive vehicles in a bid to stop the launchings.

Sue Reid: ‘The area is a traffickers’ paradise. It is dotted with brick fortifications, built in the 19th century to protect France from invasion, but still bearing the battle scars of the 1940 evacuation’

Last year, the Mayor of Leffrinckoucke, Olivier Ryckebusch, said his town was overwhelmed by the number of migrants waiting to cross to the UK. ‘We feel helpless,’ he said, before asking President Macron for emergency funds to clear up the mess the illegal travellers left behind in the woods and beach.

‘You can see on the ground the debris of transport equipment: packaging of boats, life jackets, and their old gasoline cans (for making fires). Families wait to embark from here on the beach area to England. Afterwards, we have to collect the rubbish and get rid of it in our town, somehow.’

But Leffrinckoucke is not alone. At seven in the morning on Thursday we learned that the traffickers’ had changed tactics, as they often do.

They had moved their launch operations overnight to Grand Fort Philippe, a beach on the other side of Dunkirk.

We were there early and saw line after line of migrants running from the sand dunes and nearby trees on to the beach where they desperately tried to inflate boats.

This time, the French police had got there first. They moved in fast to puncture the inflatable boats, rendering them unseaworthy. The rubber carcasses were left lying in the sand as their intended occupants tried pathetically to carry what was left — the outboard motors and metal strut supports in the bases of the boats — back into the dunes.

It was a triumph of a kind for the forces of law and order. But the traffickers, who have been embedded on this coast for 20 years now, are not easily beaten — they have organised ‘a military operation on land and sea in meticulous detail’, we were told by one senior gendarme in Dunkirk. ‘They are running the show.’

It is a cat-and-mouse game, to be sure. And, at the moment, only the mouse is winning. For if each of the migrants on the 9.40am bus from Dunkirk was paying the going rate of at least £2,000 to the trafficker tour guide for their journey to Britain, he will be a very rich man today.