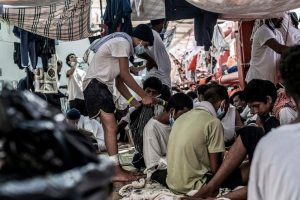 ROME — Hundreds of migrants disembarked from a humanitarian rescue ship in Augusta, Sicily on Friday after Italy offered a safe port in response to warnings that food was running out and tensions were rising on board.

The SOS Mediterranee rescue group said the sick and young were the first of the 572 migrants to disembark from its ship, the Ocean Viking. Among those on board were a boy in a wheelchair and other young children.

All are being tested for the coronavirus on land.

Italy had agreed on Thursday to let the ship dock in Augusta after the crew reported worsening conditions on board. The Ocean Viking said five requests to maritime authorities in Italy and Malta to assign a port of safety had gone unmet.

The European Commission said Friday it welcomed Italy’s decision to let the ship dock and added that it was prepared to coordinate a voluntary relocation of the migrants to other European countries. Commission spokesman Adalbert Jahnz urged EU member states to step up “in a spirit of solidarity and shared responsibility” to manage migration flows in Europe.

Italy and Malta insist that other European nations also take a share of the migrants, insisting that it’s unfair to leave the two Mediterranean nations to care for them while they apply for asylum. Because most in recent years have tended to be economic migrants, many are found ineligible for asylum, and their homelands are often reluctant to take them back.