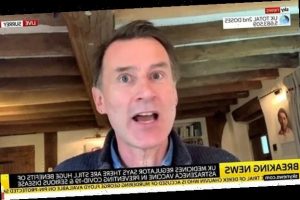 ‘Be sensibly British, keep calm, and carry on’: Ex-health secretary Jeremy Hunt urges over-30s to keep getting AZ jab because being ‘over-cautious costs more lives than it saves’

Former Health Secretary Jeremy Hunt  warned the public not to boycott the AstraZeneca vaccine today as he warned that limiting its use could cost more lives than it saves.

The ex-Cabinet minister backed the MHRA today saying the regulator had ‘got these judgement calls spectacularly right so far’ during the pandemic.

A review by the drugs watchdog found that by the end of March 79 out of 20million Britons vaccinated with the AstraZeneca vaccine had suffered deadly blood clots in the brain or arteries, a rate of about one in 250,000. Nineteen of the cases died and three were under the age of 30.

It promoted the Government’s vaccine advisory group to recommend healthy people aged 19 to 29 be offered either the Pfizer or Moderna jabs instead when the programme moves to younger groups in the coming months.

Mr Hunt, who now chairs the Commons Health Committee, was asked on Sky News whether the review would lead to a confidence problem with the vaccine, which is the most widely used in the UK.

‘This is a fascinating issue for the very simple reason that the EMA (European Medicines Agency)  … is also recommending that the Oxford AZ vaccine remains safe for all age groups,’ he said.

‘That was another thing that was interesting. Individual EU countries have restricted its use, I think that there is a real danger that being over-cautious as is happening in France and Germany will cost more lives than it saves.

‘Because what we can see in this country is that we have a death rate from Covid nine times lower than for example in France because we have this vaccine rolled out quickly. 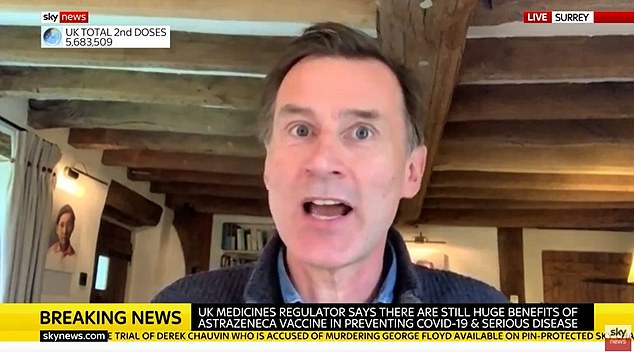 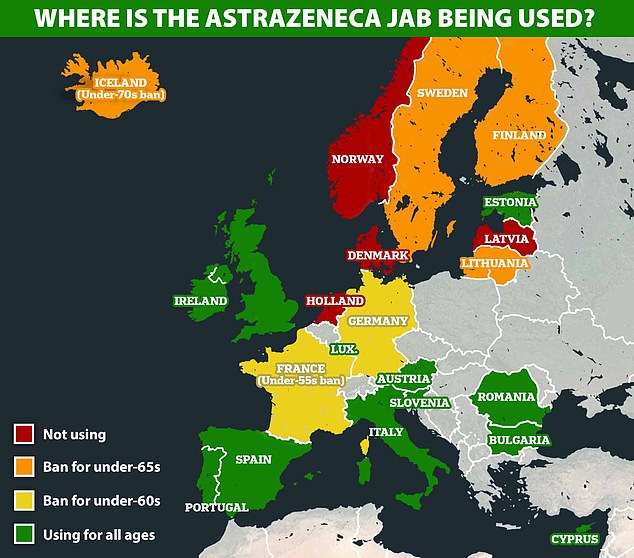 At least 10 countries in Europe, joined by Germany last week, have put some kind of restriction on the use of AstraZeneca’s jab, mostly opting to give it only to over-60s because the CSVT cases seem to be happening in younger adults

‘A lot of that is thanks to Oxford AstraZeneca so I think most people can see we are really benefiting from a rapid rollout from the vaccine.

‘But they also understand that as scientific advice comes in, in a pandemic where you need to you tweak the advice.’

The EU’s medical regulators have said that AstraZeneca’s vaccine should come with a clear warning that blood clots are a ‘very rare side effect.’

But the European Medicines Agency (EMA) refused to back banning the jab for younger age groups despite noting that most of the cases have occurred in women under 60.

The EMA refused to back EU heavyweights like Germany which have banned the jab for under-60s, arguing that the risk posed by Covid is far greater than that of potential vaccine side effects.

EU health ministers were invited to an extraordinary virtual meeting this afternoon to be held immediately after the EMA’s ruling.

Sweden was among the first to give its backing to the EU regulator, agreeing that the benefits of the AstraZeneca vaccine ‘outweigh the risks.’

The World Health Organisation likewise sought to downplay fears, describing the blood clot link as ‘plausible but not confirmed.’

However, the EMA’s announcement sparked debate among medics, some of whom were concerned that it risked discouraging people from taking the vaccine.

After the MHRA announcement, Mr Hunt told Sky News: ‘They are saying today that for the vast majority of people the benefits outweigh the risks, so I think a lot of people will have a lot of confidence in what they are saying this afternoon and take the view in this exceptional situation, to follow their advice.

‘You have got to look at the risk of getting Covid and dying from Covid. For the vast majority of people it will be massively safer to take the Oxford AZ vaccine than not to take it.

‘I am one of the people who has had my first dose of the Oxford AZ vaccine and for me and for many people it’s massively safer.

‘And that they are saying today is that it is also completely safe for young people to take this vaccine as well because of the risks to them of coronavirus. However you can reduce that very very low risk by using alternative vaccines and that is what they are seeking to do.’