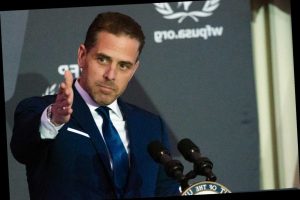 Book of lies: Hunter Biden whitewashes just about everything in new tell-all

Hunter Biden recalled how he used to scrounge through the carpet looking for crack cocaine after getting high — saying he probably wound up smoking “parmesan cheese.”

“I spent more time on my hands and knees picking through rugs, smoking anything that even remotely resembled crack cocaine. I probably smoked more parmesan cheese than anyone,” President Biden’s son said on “CBS Sunday Morning.”

“I went one time for 13 days without sleeping, and smoking crack and drinking vodka throughout that entire time,” he said during an interview to promote his memoir, “Beautiful Things,” out April 6 from Gallery Books, an imprint of Simon & Schuster.

He said his then-vice president dad tried to intervene after he began binge-drinking vodka following the death of brother Beau Biden in 2015.

“He came to my apartment one time. And this was when he was still in office as vice president, and so he kinda ditched his Secret Service, figured out a way to get over to the house,” Hunter said.

Hunter later teared up in the interview saying his dad still calls him every night.