Iran is pushing for more appeasement from Joe Biden 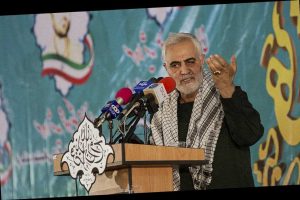 South Korea to send delegation to Iran over tanker seizure

Iran ramps up uranium work as nuke tensions with US rise

Iran is preparing for the Biden presidency by acting out, in hopes the new administration will rush to appease it.

Tehran marked the first anniversary of the US airstrike that killed terror-master Gen. Qassem Soleimani — the head of a US-designated Foreign Terrorist Organization who was then planning to target American diplomats and soldiers in Iraq — with a week-long commemoration that culminated in a request to Interpol to arrest President Trump and 47 other US officials for Soleimani’s death.

On Monday, it seized a South Korean oil tanker in the Persian Gulf, even as Seoul announced it would start negotiating the release of billions of dollars in Iranian assets frozen in compliance with US sanctions against the rogue regime.

Next, Tehran announced that President Hassan Rouhani had OK’d a 20 percent boost in uranium refinement, inching closer to the 80 to 90 percent purity required for nuclear weapons. The step is a blatant violation of the Obama nuclear deal, which the 27-member European Union and other nations still honor.

Yet the EU decided it would address the breach by changing . . . absolutely nothing. Its spokesman called Iran’s infractions serious but claimed that it is “highly important” to uphold the agreement. Why, when Tehran isn’t holding up its side?

Iran’s foreign minister explained that the uranium decision is “fully reversible” if other nations comply with the agreement — a clear sign that it wants the United States to pay a hefty added price if Team Biden moves to undo Trump’s exit from the deal.

Trump’s response was to slap sanctions on 17 more Iran-based companies, taking significant business from the Iranian metals sector, which generates significant wealth for the country. The prez has also kept a US aircraft-carrier group in the Gulf to guard against Iranian mischief in his final days in office.

In another blow to the Islamic Republic, White House senior adviser Jared Kushner negotiated a deal to end the bitter feud between Saudi Arabia and Qatar, which Tehran has been profiting from for the past four years.

That is of course just the latest piece of the new Middle East that Team Trump has fostered, with multiple Arab states making peace with Israel and a broad anti-Iran alliance firmly ensconced across much of the region. Even the two main Palestinian factions are talking about holding elections again for the first time in over a decade.

The question remains: What will a President Joe Biden do with it? Biden has made it clear he wants to re-enter the Iran deal — but he has recently hedged about actually doing it.

In reality, the accord has already done most of any good it can; it frees Iran from nearly all its obligations during Biden’s term, even allowing it to “legally” go nuclear. And America’s allies in the region — the nations most at risk from Tehran’s ambitions — are united against any further appeasement of the Iranian regime.

Nor can Iran offer any useful cooperation against nearly destroyed ISIS or any other common foe, even as Tehran’s behavior since the deal was reached in 2015 proves that the regime will never abandon its terror-promoting bellicosity.

At the very least, Biden should let Iran keep suffering under existing sanctions — and wait for it to offer a deal that actually serves the interest of America, its allies and peace.