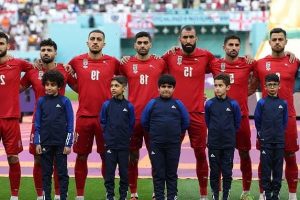 Iran’s footballers have been warned by officials in Tehran they face retribution for their ‘insulting’ decision not to sing their national anthem ahead of their Qatar World Cup match against England.

The team could face reprisals if they refuse to sing Iran’s national anthem in their remaining World Cup games, an Iranian politician warned, meaning all eyes will be on the team during their game against Wales on Friday.

Medhi Chamran, the chairman of Tehran city council, warned that the country ‘will never allow anyone to insult our anthem’, reports The Guardian.

The Iranian national squad had stood stony-faced as the anthem played at the Khalifa International Stadium on Monday ahead of their 6-2 World Cup defeat to England.

It was viewed as a stand of solidarity with protests currently engulfing Iran following the death of Mahsa Amini in the custody of Iran’s morality police on September 16. 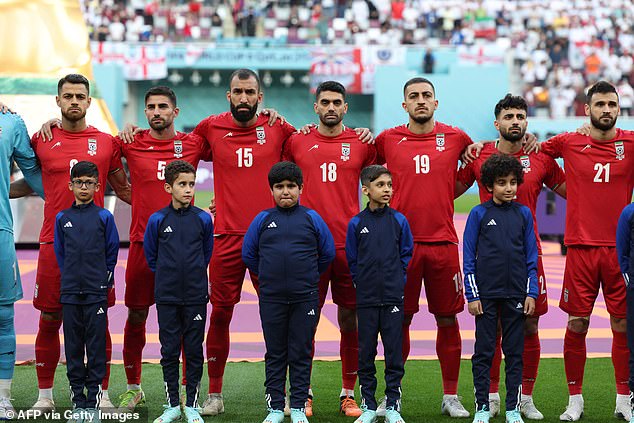 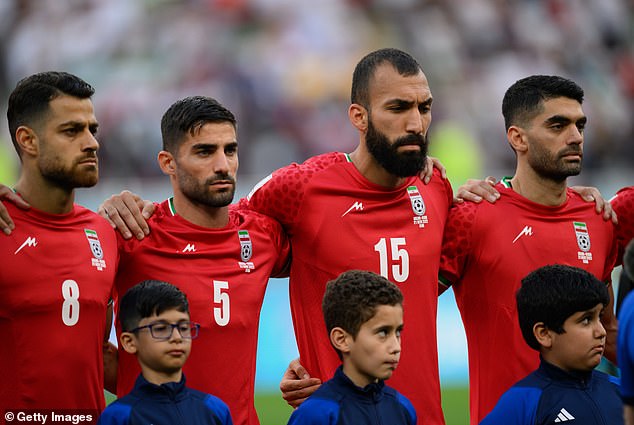 The 22-year-old died three days after her arrest in Tehran for allegedly breaching the Islamic dress code for women.

But the Iranian national squad may now face retribution for their act of defiance after Chamran said on Tuesday: ‘We will never allow anyone to insult our anthem and flag.

A conservative MP in Kurdistan also called for the Iranian football team to be replaced by faithful youngsters who are willing to sing the national anthem, reports the Guardian.

Meanwhile, a senior British politician said the risk to the Iranian players’ lives is now ‘serious and severe’ after they refused to sing the national anthem.

During the football match, Iran fans in the stands chanted Amini’s name, held signs and wore T-shirts with protest slogans and booed during the national anthem. 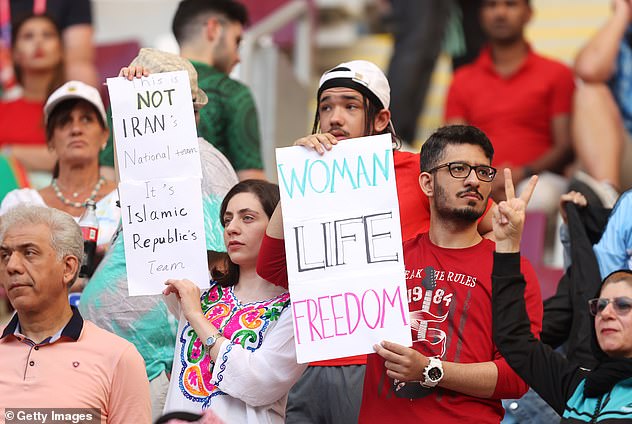 Another hard-line daily, Vatanemrooz, reported that protesters in Iran celebrated their country’s humiliating defeat in the streets, bursting into cheers in coffee shops when England scored goals and honking car horns with joy after the game.

Authorities shut down a coffee shop in the northeastern city of Mashhad for announcing it was rooting for England.

‘None of the players were ready in spirit,’ wrote Iran’s pro-reform Shargh daily.

The nationwide protest movement first focused on Iran’s state-mandated hijab, or headscarf, for women, but soon morphed into calls for the downfall of Iran’s ruling Shiite clerics.

Iran’s national team has come under enormous pressure from protesters to show support in the run-up to soccer’s global championship.

The players faced a barrage of public criticism last week after meeting with President Ebrahim Raisi at a send-off ceremony, where they were silent on the issue of protests. A few players were photographed bowing in respect to Raisi.

Iranians mourn in front of the coffins of people killed in a shooting attack, during their funeral in the city of Izeh in Iran’s Khuzestan province, on November 18. In some of the worst violence since the protests erupted, assailants on motorbikes shot dead seven people, including a woman and two children aged nine and 13, on November 16

Even as Iran’s national team perform on the world stage in Qatar, Iranian security forces continue to brutalise protesters.

More than 400 civilians are thought to have been killed since protests began in late September, with many more injured and arrested.

Iran has been wracked by more than two months of anti-regime demonstrations sparked by the death of Amini in police custody after she was arrested for failing to wear a compulsory hijab.

Since then, near-daily marches have taken place calling for an end to the country’s strict interpretation of Islamic laws and the overthrow of the mullahs’ regime.

News out of the country is limited amid widespread internet outages, but it is thought hundreds – if not thousands – of demonstrators have been killed by security forces in an increasingly violent crackdown.

Rights groups accuse security forces of firing live ammunition and birdshot at demonstrators, and of beating them with batons, violence captured in numerous videos circulated online.